Young patients at the Alberta Children's Hospital now have a chance to go mountain climbing or snowboarding without even leaving the hospital grounds. 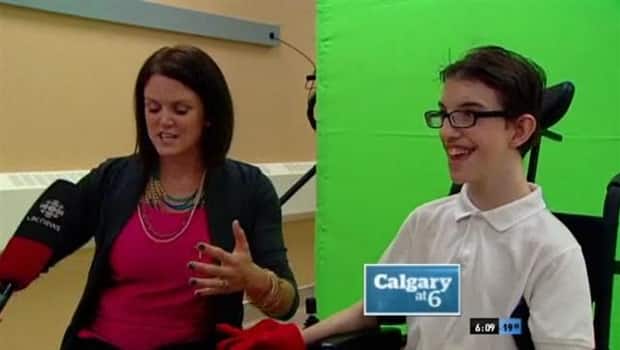 8 years ago
2:24
Patients at the Alberta Children's Hospital now have a chance to go climbing or snowboarding without leaving hospital grounds. 2:24

Young patients at the Alberta Children’s Hospital now have a chance to go mountain climbing or snowboarding without  leaving the hospital grounds.

The hospital now has a virtual-reality Interactive Rehabilitation and Exercise System (IREX) to help with treatment and disease management.

Zachary Klenner uses the system. His curved spine, coupled with the effect of cerebral palsy on his arms, makes it difficult for the 16-year-old to bring his arms and hands together.

Klenner plays games for roughly one hour a week that help him move his arms — one where he catches falling coconuts in a barrel and another where he picks up boxes from one conveyor belt and places them on another.

"Those are my two favourite games because they help me stretch out my arms. I get a real good stretch," said Klenner. "Soon, I’ll be able to get my arms down and by my sides."

Patient activity can be tracked over the course of the treatment, which allows health professionals to see what improvements have been made.

"In their day-to-day lives, children are surrounded with computer technology, so it is often hard to get them motivated to do more traditional exercises," says Dr. Barbara Ramage, co-ordinator for the C.H. Riddell Family Movement Assessment Centre at the Alberta Children’s Hospital.

"This system is a fantastic way to encourage exercise for these children and lets them play in a very fun computer world that most of them are very comfortable with."

The hospital has found children remain relatively still when they watch a favourite movie or cartoon during radiation therapy treatments, which can last up to 30 minutes.

Shawna Feradi says the tablets have been positive for her entire family because her six-year-old son, Jordan, no longer requires sedation before treatment.

"This was a huge benefit to us as the treatment times were much, much shorter," says Feradi.

"It also allowed us to choose a time that worked with our other child’s school schedule and not have to arrange child care for him or have my husband take even more time off of work."

Before radiation therapists started using tablet computers in late 2010, most patients under the age of seven were sedated for treatment.

In the last year, radiation therapists eliminated sedation for five out of eight children between the ages of four and seven.

"Reducing the amount of sedation used in young patients can have a major impact on their lives," says Mona Udowicz, radiation therapy manager at the Tom Baker Cancer Centre in Calgary.

"Sedation can affect a child throughout an entire day and make play and learning difficult or impossible. Eliminating sedation means these children can eat, go to school and generally be more active."