Cyclists to get lanes with traffic barriers downtown

Construction will begin this spring in downtown Calgary on the first cycle track — a two-way bike lane with a physical barrier from vehicles. 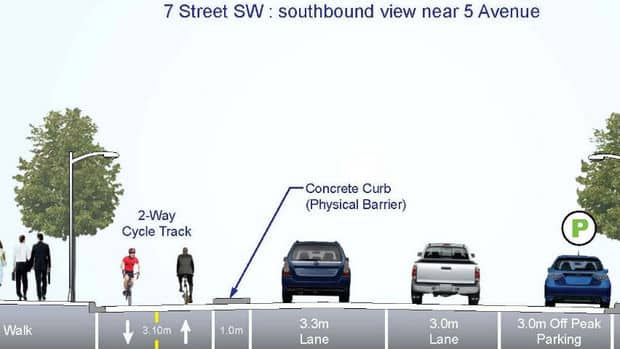 8 years ago
2:20
City officials are holding sessions on construction of the first cycle track in downtown Calgary. 2:20

Construction will begin this spring in downtown Calgary on the first cycle track — a two-way bike lane with a physical barrier from vehicles.

The first phase of the project is a two-way cycle track on Seventh Street S.W. between the Bow River Pathway and Eighth Avenue. It’s scheduled to open in July.

"The way Seventh Street operates now it's really a free-for-all if you're a bicyclist," said Tom Thivener, the city's bicycle co-ordinator. "Some brave it and ride with traffic, which is tough for a lot people to do. Others dismount and walk."

Based on similar designs offered in Vancouver, Ottawa and Winnipeg, the cycle track will have a concrete barrier between the vehicle and car lanes.

"When it gets into downtown you really need complete separation, not just a painted line because you still have the risk," he said.

A public information session was held downtown on Monday afternoon and another will be held on Tuesday from 6 p.m. to 8 p.m. at Centennial Place in the west tower.