Calgary police are reminding drivers to treat bicycles like other vehicles on the road after a video surfaced online where a downtown motorist lays non-stop on the horn for at least 40 seconds while waiting behind a cyclist at a red light.

Calgary police are reminding drivers to treat bicycles like other vehicles on the road after a video surfaced online where a downtown motorist lays non-stop on the horn for at least 40 seconds while waiting behind a cyclist at a red light.

The driver in the video appears to want to turn right onto Ninth Avenue from First Street S.W., while the cyclist ahead of him is waiting to proceed straight.

That seems to enrage the driver, whose bumper is right up against the bicycle's back wheel.

Acting Staff Sgt. Katrina O'Reilly described the video as "a little shocking" and said the cyclist was doing nothing wrong.

"Clearly the driver is being fairly disrespectful to that cyclist," she said. "The cyclist himself is in the right lane and looking like he is indicating to go forward and the honking of the horn and the impatience by the driver is a little bit disturbing."

The video, posted under the YouTube account of Leigh McDonald, has already garnered thousands of views and the description says the driver was "already on the horn for about 20 seconds" before the recording began.

"(Cyclists) certainly don't have to get out of the way of a vehicle turning from behind them," O'Reilly said. 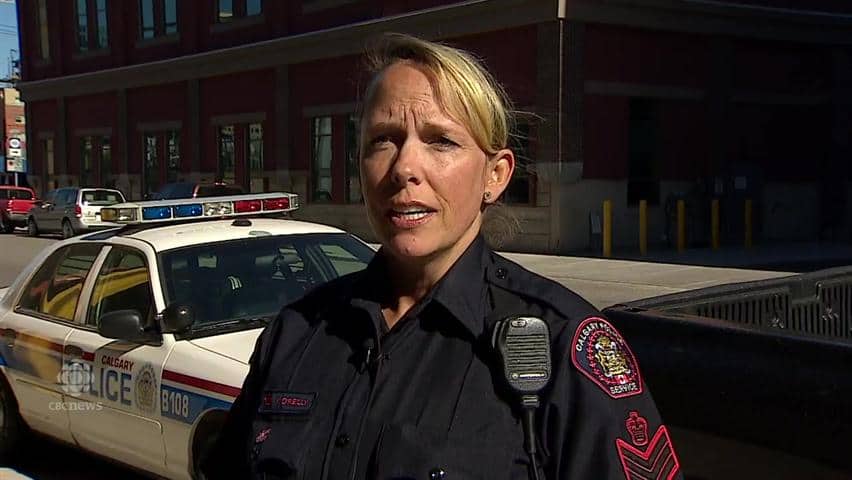 Calgary police weigh in on driver excessively honking at cyclist

5 years ago
0:48
Acting Staff Sgt. Katrina O'Reilly explains why the driver who was recorded on video honking excessively at a cyclist waiting at a red light was in the wrong. 0:48

"But they do need to be fairly observant and cautious as to what's coming up from behind because they aren't terribly predictable and drivers aren't sure what cyclists are doing."