Tory candidate Joan Crockatt felt the pressure Saturday, at a Calgary Centre byelection debate where she faced-off with three rival candidates - who wasted no time challenging the perceived frontrunner.

Crockatt caused a stir when she called the U.S. a financial "basket case" 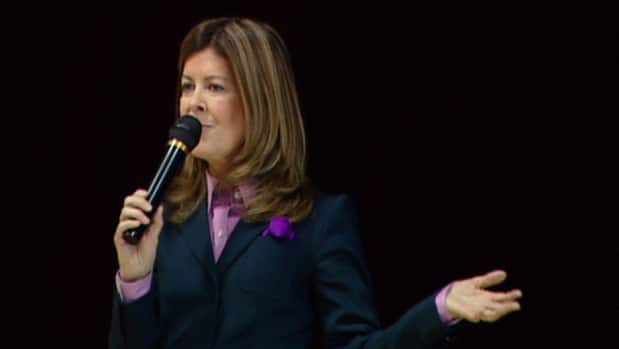 Tory candidate Joan Crockatt felt the pressure Saturday, at a Calgary Centre byelection debate where she faced-off with three rival candidates - who wasted no time challenging the perceived frontrunner.

"When you say you'll do whatever Stephen Harper asks, how can we trust anything you say?" said NDP Candidate Dan Meades.

Crockatt has been criticized for skipping candidate forums and debates, and confirmed Friday she will not be attending Sunday’s forum and will instead be campaigning in her riding.

The candidates fielded questions from the audience that touched on poverty, high-speed trains, oil and gas pipelines, transfer payments and funding for the CBC.

Later she was asked to clarify her comment in which she replied,"Yeah, just research it on Google it's there."

Crockatt also caused a stir when she said the U.S. is a financial "basket case."

"Anybody who thinks we do not continue to have a critically important relationship with the U.S. really doesn't understand the Canadian economy, our culture or our border," Locke said.

A recent poll found Crockatt is in a much tighter race with the Liberal and Green Party candidates than first thought.

Green Party candidate Chris Turner says it's time for voters to break the trend of sending a Conservative to Ottawa.

"The great thing about this Calgary-Centre byelection is that we're really having a terrific conversation about what Calgary needs right now and what sort of message we can send to Ottawa," Turner said.

Other Calgary Centre candidates include Libertarian Tony Prashad and Antoni Grochowski as an independent.