Canadian Pacific Railway wants to have a group of office workers who can drive trains in the case of a strike or shortage of workers.

'We are asking everyone who is physically able to become a qualified conductor and engineer,' CP head says 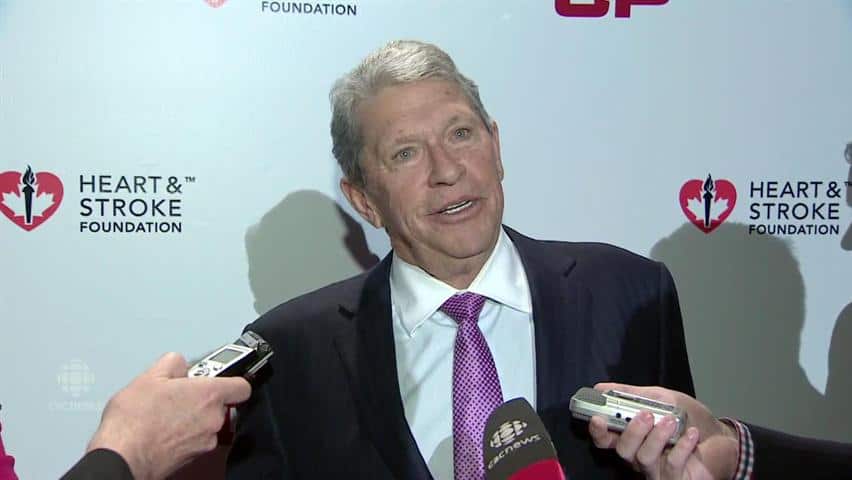 CEO Hunter Harrison discusses the poor relations with the union and his desire for office staff at the railroad to jump into the driver's seat and operate trains across the country.

5 years ago
3:04
CP Rail CEO Hunter Harrison discusses poor relations with union and his desire for office staff at the railroad to jump into the driver's seat and operate trains across the country. 3:04

Canadian Pacific Railway will continue to use some of its office staff to drive trains, as negotiations with the Teamsters union drag on.

The company and union are currently in federal government ordered arbitration, following a two-day strike in February.

"We are asking everyone who is physically able to become a qualified conductor and engineer," said CEO Hunter Harrison, after the company's annual general meeting in Calgary on Thursday.

The company is allowed to use office staff when there is a shortage of professional unionized workers to ensure the trains continue operating.

The Teamsters Rail Conference had warned in early February that CP was training more and more office workers in case of strike.

When a work stoppage occurred later that month, the company turned to those office workers to operate some of the trains. At the time, the union suggested all types of non-union workers are driving trains.

"Some of them are office workers, secretaries, data input, some of them are mechanics on the track, supervisors. Those workers from the office are career office workers, sometimes 25 or 30 years' experience, being scheduled for training to go ride trains and switch box cars in yards," said Doug Finnson, president of Teamsters Canada Rail Conference.

Harrison is now hinting more of the office staff will be trained to drive trains in the future.

"CP before, it's my understanding, has never tried to work during a work stoppage," said Harrison. "Next time, we will be able to handle 100 per cent of the tonnage."

The use of office workers to operate trains has been criticized because of safety concerns. "They are not professional, running trades employees. They are running human resource professionals, or other managers and supervisors," said one expert.

Harrison said the training helps office workers understand the business, in addition to helping the company in case of a work stoppage.

"We should do all we can to be in the position that we can serve our customers," he said.

The Teamsters and CP are currently in arbitration. Last month, federal Labour Minister Kellie Leitch appointed George Adams as the arbitrator. The last collective agreement expired at the end of 2014.

"It's not good. I wish I could say it was better," said Hunter about relations with the Teamsters. "It's change. They are the only group on a different kind of pay scale. It goes back to an antiquated mileage system, we think. It goes back 130 or 140 years."

Meanwhile, Harrison is looking forward to meeting Alberta's premier-designate Rachel Notley. He says CP Rail is willing to pay its fair share if the new government decides to raise taxes in the province.

"If there are fiscal problems here, which there are with the oilpatch and all, and our tax bill has to go up like everybody else's, look, we are willing to pay our share," he told shareholders.

The railway fuel tax will likely increase by four cents a litre. The change was included in the spring budget by the PC government and is being kept by the incoming NDP. Corporate taxes could increase by two per cent.