Copeman clinic, doctors battle over how private health care should be delivered

Two doctors who were fired from a private health clinic in Calgary say the clinic pressured physicians to give preferential treatment to fee-paying patients and order unnecessary medical test.

A private health clinic in Calgary is allegedly trying to pressure its doctors into giving preferential treatment to fee-paying patients and repeatedly putting those doctors in conflict with their professional obligations.

The allegations are set out in a lawsuit involving Tom and Mary Szabo, two doctors who used to work for the Copeman clinic.Tom Szabo was the clinic's medical director.

Copeman terminated its contract with the Szabos in October 2015 and launched a $17.1-million lawsuit against the married couple when they opened their own public-private health clinic, alleging they violated a non-compete contract. The Szabos then filed a $4.1-million counter-suit in the Alberta Court of Queen's Bench.

None of the allegations have been proven in court. The Szabos declined to talk to the CBC about the lawsuit. The CEO of the Calgary Copeman clinic, Chris Nedelmann, did not return CBC's calls.

There were some concerns brought to us by stakeholders, and we thought it was important for us to follow up on that.- Sarah Hoffman, Alberta health minister

Critics have long been concerned that for-profit health clinics might be prioritizing fee-paying patients in contravention of the Canada Health Act, which guarantees universal access to basic health care.

But the legal filings submitted by the Szabos go further, painting a detailed picture of alleged improper practices, ranging from unnecessary medical tests to "inappropriate fees" — all of which Copeman denies.

The provincial government says it is now auditing the Calgary clinic and that it's concerned about preserving universal access to health care in the province.

"There were some concerns brought to us by stakeholders, and we thought it was important for us to follow up on that," Alberta Health Minister Sarah Hoffman said in an interview with CBC News.

Thousands of dollars in membership dues

While there has been an ongoing debate about whether private clinics create a two-tier health system or simply free up room in the public system, clinics like Copeman have a loyal following of patients who value the access they provide to a range of services under one roof. Some say the comprehensive care is especially helpful for those living with chronic health conditions.

Even the Szabos follow a similar model to Copeman's at their new clinic, offering insured health care as well as enhanced, uninsured services such as an on-site lab, a house call service and videoconferencing for patients who are travelling.

The clinic, Advanced Primary Care, charges an annual membership fee of $2,825 in the first year $2,575 in subsequent years, and Copeman maintains that APC's services are close enough to Copeman's that it should be considered a direct competitor.

The first Copeman clinic opened in Vancouver in 2005, and there are now a total of four — in Vancouver, Calgary and Edmonton. The clinics can't charge for insured medical services, such as doctor's visits, which are billed to the province, but they do charge annual membership dues for uninsured services, including consultations with dieticians, kinesiologists and psychologists.

The highest membership level costs $4,325 in the first year and $3,325 in subsequent years, although some services incur additional fees.

The Calgary clinic, which opened in 2008, works with about a dozen family physicians and has thousands of patients.

The clinics also make money from so-called executive health services, which are usually billed to corporations.

While the Szabos' lawsuit is particular to the Calgary clinic, similar private clinics have spread across the country in the last decade. In 2013, Montreal-based Medisys bought a controlling stake in the Copeman chain. Medisys operates what it describes as the country's largest chain of private clinics, with outlets in most major cities.

Half a dozen former and current Copeman medical staff spoke to the CBC for this story on condition of anonymity. Most describe a years-long push for uniformity between Copeman Calgary and head office in Vancouver. They say doctors at the Calgary clinic were told by management to subject patients to a standard battery of tests before they even saw a physician and independent of their individual medical history.

The Szabos allege the Vancouver office demanded they order "routine, 'cookie cutter' annual lab tests, stress tests and other tests that could not be justified" and were considered improper by the Szabos and other physicians at the Calgary clinic.

Calgary cardiologist James Stone says only about 20 per cent of patients or fewer need an annual stress test.

"Without saying anything about anybody's particular clinical situation, the guidelines are quite clear: doing treadmill testing in asymptomatic populations who are not at high risk is inappropriate," he said.

The guidelines are quite clear: doing treadmill testing in  asymptomatic  populations who are not at high risk is inappropriate.- James Stone, cardiologist

The Szabos' suit also alleges that Copeman "initiated a policy of ordering laboratory and exercise stress tests in the physicians' names without physicians' knowledge."

Copeman denies the allegations about the standard medical testing and says that it was, in fact, Tom Szabo who was in charge of reviewing the clinic's standard panel of lab tests and making recommendations but that he never completed the task and "the work had to be reassigned to the corporate medical officer" and eventually did result in changes.

"During the vetting process, questions raised led to the recommendation that each physician review their own lab panels and 'add to' or 'strike off' what they thought appropriate for their individual patient," Copeman's legal filing states. "This process remains in place to date."

At Copeman, which advertises the benefits of unhurried care, patients are ordinarily booked in half-hour increments, twice as long as the typical 15 minutes at traditional clinics.

The Szabos' suit alleges that Copeman tried to reserve those half-hour appointments and other "preferential services" for fee-paying patients and "made efforts to prevent physicians from seeing patients that were not paying fees." 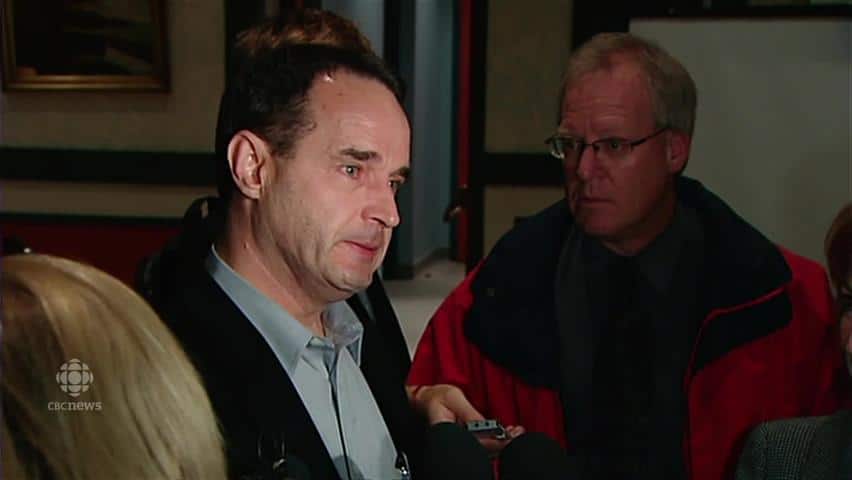 ARCHIVES: The owner of a new health clinic in Calgary becomes emotional when he tries to answer questions raised by protesters during the Copeman Healthcare Centre's first day of operation.

Copeman denies that it interfered with physicians' appointment scheduling or "made preferential appointments for some patients over others."

"Copeman denies that it offered preferential services to any patients for appointments to receive insured services unrelated to the medical needs of each patient," the company said in its response to the counter-suit.

Giving preferential treatment to fee payers would be a violation of the Canada Health Act provision guaranteeing equal access to basic government-insured health care, according to Ubaka Ogbogu, assistant professor of law at the University of Alberta.

Under the Alberta Health Act, physicians get paid a set fee for standard doctor's visits, regardless of how long they take. They can't be paid for that or any other insured medical service, beyond what they bill to the government.

Doctors at Copeman do, however, receive a generous stipend, which sources say is between $750 and $1,000 per day, on top of their Alberta Health billings. The extra money ostensibly covers non-medical duties such as attending meetings.

The Szabos' lawsuit also raises concerns about an initiative called Copeman Kids, which launched in 2013. Prior to that, adult patients often booked their children in to see the same family physician they were seeing. Those visits are covered by Alberta Health, which meant the children got the benefit of the clinic's spa-like surroundings and longer appointments without having to pay.

Physicians were trapped between their duty to patients … and pressure from  Copeman  to support its plans to improve revenues.- Statement of defence of Tom and Mary Szabo

With Copeman Kids, the clinic introduced an annual fee of $300 per child (now up to $500) and advertised that members' children would get augmented care.

The Szabos, however, allege the care was little changed from the free service. According to their lawsuit, they were not the only physicians to have serious concerns that the fees being charged were inappropriate.

"Physicians were trapped between their duty to patients, potential discipline by the College of Physicians and Surgeons of Alberta and pressure from Copeman to support its plans to improve revenues," the suit says.

Copeman admits in its legal filings that the launch of the children's program did not go well but contends that Tom Szabo participated in the program's development. It denies that it ignored protests from physicians about the program and insists that any fees charged for children's medical care were for uninsured services.

When asked about potential problems at private clinics, the College of Physicians and Surgeons of Alberta said that while it has authority over doctors, it has no jurisdiction over management personnel at clinics who are not physicians.

The Calgary lawsuit may take more than a year to make it to trial, but legal experts say the outcome could set a precedent for the rest of the country.