More than 100 teen girls gave up their Saturday to attend workshops at the Young Women of Power conference.

Some stories shared were similar to Rehtaeh Parsons' 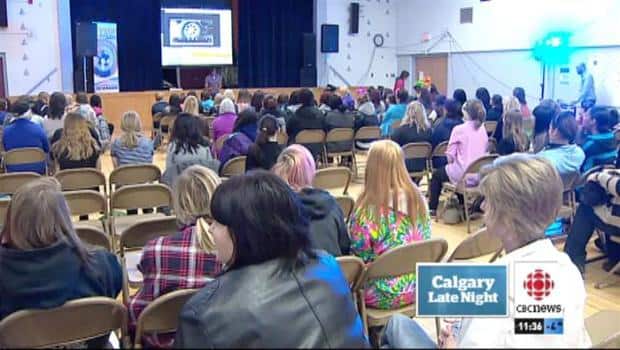 More than 100 teen girls gave up their Saturday to attend workshops aimed at keeping them out of harm's way.

"With confidence, it's so easily broken and so easily taken from young girls these days," says YWOP volunteer Andria Bidulka.

The first YWOP conference was held in 2010.

Program founder Alison Springer was a youth speaker and mentor when a girl she mentored confided to her that she had been raped.

Now, she says she wants to offer other young girls a clean slate and the opportunity to focus on the future.

Getting the girls to realize they can still have a future, despite whatever challenges they are facing, is what the program is all about.

"When our girls come into our classroom, I tell them, 'We haven't read your chart, we don't know why you're here,'" Bidulka says. "You are a person, a human, we love you and we just want you to grow and to develop into somebody we can look back at and say, 'Wow, they're going to change the world.'"

Meanwhile, on the other side of the country, hundreds packed the pews of a Halifax church for the funeral of Rehtaeh Parsons.

The Nova Scotia teen committed suicide after an alleged sexual assault and being taunted with photos of the alleged incident online.

"It's just so sad," Springer says. "Immediately I felt sick to my stomach and then I began to cry, because it's just another girl who will never know who she really is."

While Rehtaeh's story is a worst case scenario, Springer says that her story isn't entirely unique.

"Nobody ever told me that if I went to one party, that I could end up damaged, physically and emotionally," one participant says.

YWOP organizers say they hope to keep their young girls, many of whom have been through the justice system, from the same fate.

"I got into trouble and just hanging around the wrong crowd," says 14-year-old participant Shelby Banera. "It just helped me realize a lot, realize I'm a really good person."

Springer says she hopes to expand YWOP across Canada.