The hardest day in Amanda Jensen's life was finding out her six-year-old son had leukemia, but the situation was made much worse when she found out Alberta legislation didn't offer her any job protection for compassionate care and she was let go by her employer.

'Our laws are wrong on this,' says Alberta Labour Minister Christina Gray 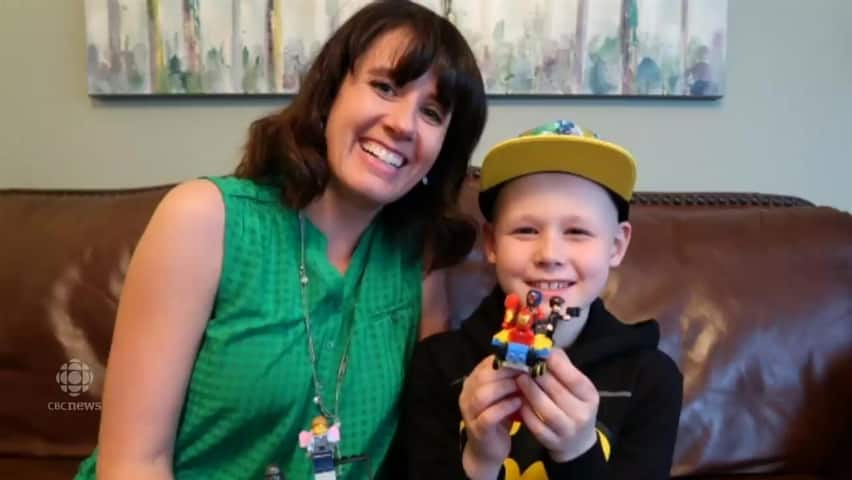 4 years ago
0:29
A Lethbridge mother is sounding the alarm on the injustices of current labour laws in the province. 0:29

Amanda Jensen will never forget the day she learned her six-year-old son Jake had leukemia — a heartbreaking moment made worse by the chain of events that followed that left her without a job.

Now she's pushing for the Alberta government to do more to protect workers' rights for parents who care for critically ill children.

"Picking him up from school that day, I couldn't look at him without feelings of terror that filled my heart, and fear for the future," Jensen said from her home in Lethbridge.

She had little time to process the diagnosis on Oct. 5, 2016, before Jake was rushed to Alberta Children's Hospital in Calgary the next day for urgent treatment.

That was the same day she first contacted her employer, the Lethbridge Lodging Association, to notify them she would be spending an extended period of time in Calgary for her son's treatment.

'Solution that best suits our needs'

On Oct. 19, the employer issued a record of employment for Jensen, listing compassionate care leave as the reason for her departure. Jensen said between this and her conversations and correspondence with her manager she understood that her request for a 35-week leave of absence had been granted.

A month later, however, the Lethbridge Lodging Association terminated her unpaid leave and employment.

"We want you to know that after having exhausted all other resources in search of a solution, we have found it necessary to go with a solution that best suits our needs given the unfortunate circumstances," the non-profit's manager said in an email to Jensen dated Nov. 7.

Jensen was encouraged to apply for the job in the future if it became available again.

"Instead of just being able to focus on … a new cancer diagnosis for my six-year-old son, I was then forced to think about my future well-being and my ability to provide for my family," Jensen said.

Her situation was further complicated by the fact she had filed a sexual harassment complaint to her manager just days before her son's diagnosis.

Jensen went on to file a complaint with the Alberta Human Rights Commission on the premise she was discriminated against based on her gender and family status. The complaint has been dismissed, but Jensen is pursuing an appeal.

The Lethbridge Lodging Association provided a statement to CBC News that did not address Jensen's complaint to the human rights commission.

"[The Lethbridge Lodging Association], undergoing major strategic changes and never having encountered this situation, investigated all avenues and resources available to a small, not-for-profit organization before deciding not to grant the extensive leave of absence request," the statement read.

In documents provided to the commission, the association denied the allegations of discrimination.

No protection is 'mind boggling'

Sexual harassment allegations aside, what floored Jensen more than anything about her situation was that it was perfectly legal for her employer to terminate her employment.

Alberta's labour laws require an employee to work at their job for one year to be eligible for compassionate care leave. Jensen had been at her job for eight months.

Another sticking point was the requirement for a doctor's letter certifying they believe the family member will die within 26 weeks, whereas Jake is on a 3½-year treatment plan and is expected to recover.

"It's mind boggling to me that I could go on maternity leave being pregnant with my son and giving birth, and having that year off — which is exactly as it should be — but then when that same child becomes potentially terminally ill six years later and I need to take a leave from my job, that there's no job protection for that," Jensen said.

She said balancing the stress of her termination, along with cancer treatments and caring for her three other children fresh on the heels of a divorce has been an unimaginable roller coaster.

People enrolled in the federal employment insurance program for caregivers of critically ill children are eligible for 55 per cent of their average weekly earnings, up to $537 per week, for a maximum of 35 weeks.

Jensen said she's all but given up hope for personal justice, but hopes her story can help inspire change in Alberta's policies, something Labour Minister Christina Gray would also like to see.

"In this case, the law that exists in Alberta today allowed this to happen and it shouldn't have happened to her," said Gray.

For a caregiver who meets all of the provincial requirements, only eight weeks are protected.

"Workers should be able to go to work, contribute to the economy and still be able to take care of themselves and their families," Gray said.

"Our laws are wrong on this."

The Ministry of Labour recently concluded a consultation process for changing these laws and Gray said she's in the process of reviewing the feedback. There is no timeline for changes to be made to the current laws.

"Because our workforce legislation hasn't been updated since 1988, we're out of step with the rest of Canada," Gray said.

Jensen's former employer told CBC News it was a part of the government's public consultation.

Alberta vs. other provinces

The Ministry of Labour compiled research documenting where Alberta stands in comparison to other provinces in terms of compassionate care leave.

Alberta is one of four provinces that does not have a program or policy that applies to parents caring for critically ill or injured children, as opposed to adults caring for other ailing adults.

The majority of provinces that do have policies specific to caretakers of critically ill children typically allow 37 weeks of leave, longer than the time allotted for general compassionate care in most provinces.

Federally, the Liberal government committed more money this year to expanding employment insurance coverage for compassionate care leave, but only for those caring for terminally ill adults.

Sarah Lawrynuik reports on climate change and is now based in Winnipeg, Man. after five years of calling Calgary home. She's covered news stories across Canada and around the world, including in France, Hungary, Ukraine and Iraq. She has worked for CBC News in Halifax, Winnipeg and Calgary.