The fight against climate change down home on the Alberta farm

A National Farmers Union report released this month says old-fashioned mixed farming combined with new technology can reduce greenhouse gases. It's work already underway in Alberta as more farmers look to adapt to a climate changing around them.

Not only will farmers be impacted by a changing climate, the way they tend the land can help mitigate changes 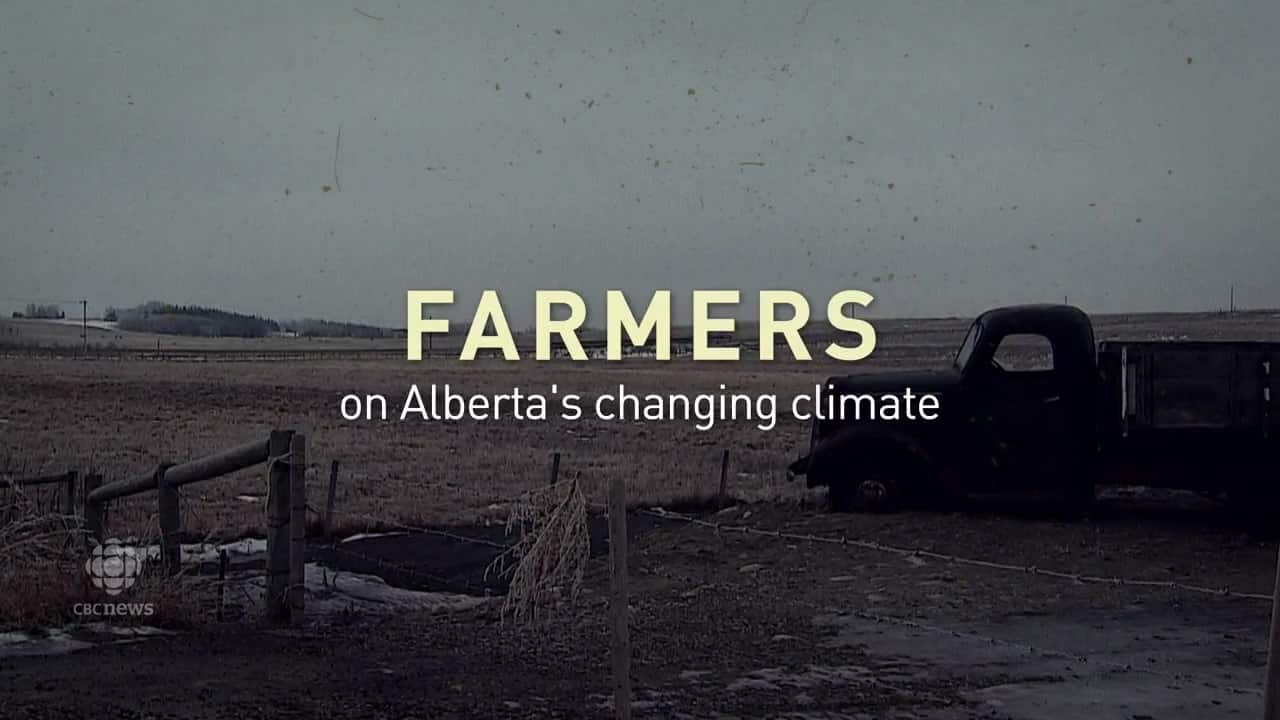 If you talk to a farmer, many will tell you that they've noticed the weather is changing.

Alberta has always had erratic weather, but those working the soil or raising a herd — whether for years, or decades — are getting more curveballs thrown at them each year. From increased wind, rain at harvest, intense snowstorms during calving and hot summer days that bring drought, farmers are being forced to adapt.

The Prairie Climate Centre's own models agree that things are getting hotter, and project a spike in plus 30 C days for the prairies in the coming decades.

That sort of spike would be bad news for Alberta farmers and mean many will have to adapt to new realities and do their part to stem the tide of climate change – a potentially charged subject in conservative farming circles. But it's a conversation that's starting to happen in fields and towns across the province

The kind of change needed to tackle future challenges is exactly what the National Farmers Union is calling for in its report released this December. It says old-fashioned mixed farming combined with new technology can reduce greenhouse gases. The group is also urging farmers to move away from big-money, big-acreage and big-machine farming that can bring big debt.

While it might seem like a daunting task for farmers, the good news is work has already started on what farmers can do to prepare and help stem the tide of climate change.

Farms can 'heal the land'

Jerremie Clyde, splits his time between his mixed farm near Sundre and his city job in Calgary.

He and his family rotate crops each year, planting a wide variety, like potatoes, rye and oats. They raise yaks over cows because the animals have less environmental impact, including how much water and food the shaggy Himalayan beasts consume. Yaks have also been said to create less methane emissions, something of a beef for many environmentalists.

"It tastes just like beef. I would say slightly better than beef," said Clyde about the lean meat.

His company, Little Loaves Farm, sells its bounty to nearby markets, connecting with neighbours over the love of good food. They also hope to sell their meat directly to consumers online.

"Farms have a huge potential to heal the land," said Clyde. "Like, depending how you farm, you can radically increase biodiversity of both plants and animals, wild and domestic, and that doesn't have to get in the way of what you're raising commercially for sale."

Clyde encourages other farmers seeking low capital solutions to think of farming as a research activity. For example, taking care of the soil can act as a carbon sink and can help keep the land's water table healthy, creating biodiversity and could even reintroduce wildlife back into that area.

He says there are also agencies out there offering grants for alternative land uses to help farmers pay for fencing or water to repair riparian areas, for example.

"Farmers are in a real trap. If you have a ton of debt doing something new is pretty scary because it might not work. A lot of the organic stuff, it doesn't work right away. You have to learn it. You have to learn how it's going to work on your site," he said.

"So you can expect a few years of it not going well. Eventually you might get higher yields than you would have elsewise. But it won't be immediate."

Bennet is compiling data from the Alberta Narrative Projects, which is trying to find language that brings people together to talk about what's happening.

Last year it had dozens of conversations with focus groups of all different sectors, like farmers, oil and gas workers and even religious groups.

"People don't feel invited to the conversation," said Bennett, adding many times the debate is night and day when it comes to urban and rural perspectives.

"In some cases it's quite dramatic."

She said how we engage in the climate conversation is usually tied to our identity.

"People feel blamed and threatened," she said, adding climate change can be a tough word because it's so polarized.

She recommends asking farmers directly about the weather, then listening. There are serious issues, such as a consistent water supply, forest fire impacts on crops, securing our food supply and economic diversification so people can stay on the farm.

"All of our well-being is tied to what they are doing," said Bennett.

"Seems like everything is more intense," said Barritt who, along with her husband, tracks the weather day to day.

"We are getting wetter, warmer winters."

She says rain is often coming at the wrong time. Her husband, Vance,  notices the wind patterns have changed a lot since he was a child living on that piece of land east of Red Deer.

But Barritt says there's also more information and more inspiration. She says before they had to look south of the border for environmental success, but that's changed over the past decade. She hopes her group's podcast can help spread those stories.

"I think that's also part of the narrative that can be amplified and needs to be amplified, is that there are agricultural practices out there that both benefit the farm and help us deal with potential uncertainty, but also are part of mitigating, to some extent, the impacts that we know are coming our way through climate change," she said.

She says keeping healthy grasslands is imperative. A study published this November in Science Advances echoes that view.

Barritt says Canadians can support farmers by voting with their dollars and buying direct, while remembering the cost is often more because those local producers are footing the cost of storage, distribution and better land management.

She also pointed to conservation easements and alternative land use grants as great support for farmers trying to do things differently.

"If I was to think of what can government do, I think it's just really continuing to support that kind of research and maybe not getting in the way. But also amplifying and learning from it and know we don't need to recreate the wheel," said Barritt.

Jane Rabinowicz is with SeedChange, a charitable group that works with farmers to grow food sustainably with locally adapted seeds. She says how farmers adapt to a changing climate is important.

Her group works hand-in-hand with farmers in their fields and on policy to spread sustainable and climate resilient farming.

The cost of farming can be high, and she says farmers are experiencing high debt. The average age of Canadian farmers is also over 55 and a new generation of farmers will need to have access to a decent livelihood.

Her group's goal is to continue spreading information as more research becomes available, because she says folks are getting a bit of a mishmash of information and that's creating fear. SeedChange is also helping to develop new varieties of climate resilient crops that are locally adapted.

Rabinowicz says there are also farm-based solutions, like growing more than one crop on the same field, better water management, wildlife corridors, soil conservation and watching what inputs – like nitrogen -- are added to the soil.

"A big chunk of our greenhouse gases from agriculture come from the production and use of nitrogen inputs and so high-input farming is high-emissions farming. So any kind of practices that help decrease reliance on inputs are also going to be really helpful," she said.

Rabinowicz agrees farmers can feel isolated and even blamed for their role in climate change. They might even worry what their neighbour will say if they change production practices. She agrees talking about the weather and its impact is a great way to get the conversation started.

"Farmers are and always have been on the front lines of the weather, right? And so, you know, farmers have always had to adapt their practices and farmers are the ones who are the stewards of the land and they're out there observing changes very closely," she said.

"So there have always been changes in climate as well that farmers have observed and they have been able to adapt their practices and adapt their crop over time as climates have changed. So I think it actually can be a useful way to talk about climate change with farmers."