Concerned about opioid addiction, some Calgarians drew chalk outlines of bodies on downtown pavement to represent the hundreds of Albertans who have died of overdoses. 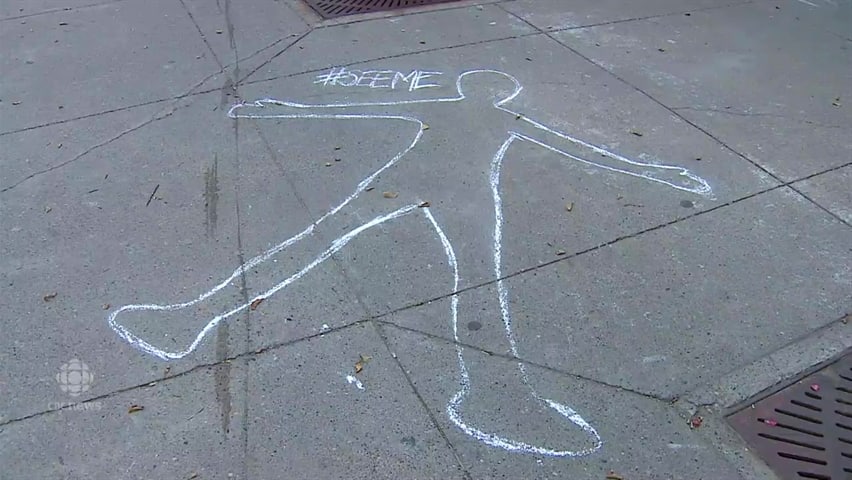 4 years ago
0:29
Calgarians took to the streets on International Overdose Awareness Day with a creative art display. 0:29

Concerned about opioid addiction, some Calgarians drew chalk outlines of bodies on downtown pavement to represent the hundreds of Albertans who have died of overdoses.

There have been 609 fentanyl-related deaths in the province since the beginning of 2016.

"We're trying to raise awareness for the opioid crisis going on," said Shawna Taylor, who helped organize the Calgary event as part of the International Overdose Awareness Day.

"It was kind of a way to take note that there are so many people dying in this crisis …To make people stop and see that people are just walking all over it, not paying enough attention to the crisis that's out there right now."

'I told my parents I was doing drugs'

Her daughter, Kenedee Taylor, says she started taking fentanyl with her boyfriend when she was 17 years old and eventually became homeless and did whatever she could to pay for the drug.

"I told my parents I was doing drugs and they tried to get me treatment, but the wait time was so long, that I could have  —and probably should have — died in between that time, but somehow I survived," she said.

Taylor waited six months before finally beginning treatment and — after suffering a relapse — has been sober for eight months.

"I would like to try and help people get into treatment sooner, faster. As soon as they want it, they should be in detox and rehab," she said.

Her mother says stigma and shame are the two biggest factors holding people back from getting treatment.

"This isn't about what the government is going to do. It's about what they should have done by now and we're just wanting to get people out talking about other things besides the politics involved [such as] just how many people are actually dying," Shawna Taylor said.

Mayor Naheed Nenshi said more Calgarians are dying of overdose deaths than due to violent crimes.

"Prevention, harm reduction, treatment and enforcement. All of those four things have to work together, because our job as a community is to keep people alive and to help people get better. And for too long, we've been caught in rhetoric around our own feelings — or ethics or morals — around these issues that prevent us from looking at all four of those pillars together."

At a similar gathering in Edmonton, Alberta Health Minister Sarah Hoffman said it was an emotional day for her because she was talking to parents who have lost children.

"I think that it's important that we take time to reflect on those lives that have been lost [and] the importance of changing public policy to make sure we can prevent any preventable death. People who use substances are people first and they deserve to be respected and have an opportunity to live another day."