Castle-area ATV ban battle heats up as thousands weigh in

More than 3,000 Albertans have had their say about the province's proposed phase out of off-highway vehicles in the Castle area, which has pitted environmentalists against recreational riders. 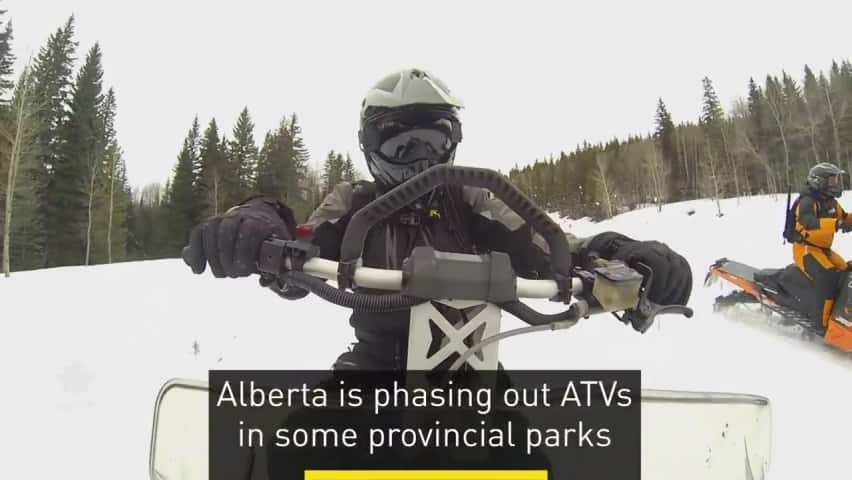 More than 3,000 Albertans have had their say about the province's proposed phase out of off-highway vehicles in the Castle area, which has pitted conservationists against recreational riders.

If there's snow on the ground you'll find Joe Trotz on the trails in Castle Wildland Provincial Park. He calls it his playground.

"It's a great experience to be out in the outdoors," Trotz told CBC News.

But, he fears his days of snowmobiling in the Castle area are numbered.

"I guess we feel cheated because a lot of us use this area with respect."

"Families can camp and hike, kids can get their first taste of nature," Notley said at the time.

But not everyone was happy because part of the proposal is phasing out the use off-highway vehicles in the expanded parkland.

It would mean within five years there will be no all-terrain vehicles, quads, dirtbikes or snowmobiles allowed.

Conservationists say there's no place for them in the parks because they cause too much damage to the land, watershed and wildlife habitats.

"OHV's have a disproportionate effect on our vegetation, on our water quality, on our headwaters, on the ability of our recreationists to enjoy the area and on local residents and ranchers," said Katie Morrison of Canadian Parks and Wilderness Society.

The government is taking online submissions from Albertans about the best land uses and the best ways to protect this 1,000 square kilometres of expanded parklands.

The local MLA says it's a hot topic.

"Over 3,000 responses in the survey, Albertans are absolutely engaged in this process and we're committed to listening to them all the while until a decision is made," Cameron Westhead said.

But for Trotz, he and his snowmobiling friends are convinced enforcement of abusers is a better option than a ban for all.

"Fines that are going to do something or your machine is going to get taken away if you're caught in a certain areas," Trotz said is his preferred route.

"You know, I think if people know that this is going to happen, people will start policing themselves so they can use this great outdoors we have here."

With files from Carolyn Dunn and Colin Hall