Three Calgary caregivers who slapped, splashed and threatened to dump urine on a 92-year-old man at a seniors care centre have each been sentenced to 60 days in jail.

3 women caught on tape slapping, flicking water at and threatening to dump urine on frail man 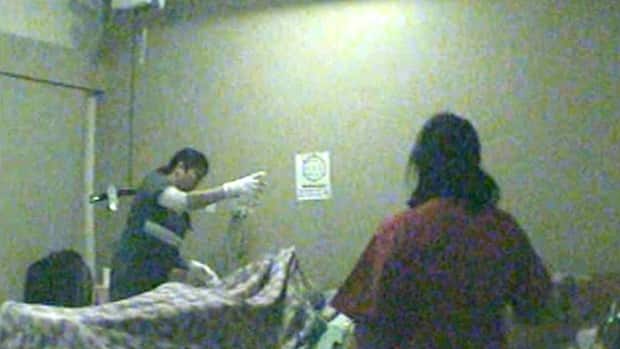 5 years agoVideo
0:49
Three Calgary care home workers who slapped, splashed and threatened to dump urine on a 92-year-old man at Garrison Green CareWest facility have each been sentenced to 60 days in jail, to be served on weekends. 0:49

Three Calgary care home workers who slapped, splashed and threatened to dump urine on a 92-year-old man at Garrison Green CareWest facility have each been sentenced to 60 days in jail, to be served on weekends.

"This was a significant breach of trust involving an individual entirely dependant on his caregivers," Judge John Bascom wrote in his sentencing decision.

Maria Theresa Dumo, May Casimero and Angelina Borja were caught on camera slapping Ulrich Wissner, 92, in Februrary 2014 at the seniors home.

The three could be seen on video giving Wissner the middle finger, flicking water at him and threatening to pour urine on the elderly man.

Wissner was bedridden, unable to move, frail and nearly deaf. He also had prostate cancer.

In late 2013, Wissner's family noticed a change in his personality. He told them that staff at the facility were hurting him and begged his sons not to leave him alone.

A motion-activated hidden camera was installed in Wissner's room by his son. Once retrieved a few days later, it showed the three workers abusing the elderly man.

The Wissner family brought the video to police and all three women were fired on Feb. 10, 2014, three days after the assaults that were caught on camera.

Others did 'much worse'

"[It is] sad it is us in the video...there is a lot of people who do much worse to him than I am doing," Dumo told police.

"I could not explain what happened on that day, it's not me," said Casimero.

"Maybe because I'm pissed off that night, I don't know," Borja said to investigators.

In a victim-impact statement, family members said the caregivers' actions made Wissner miserable in his final moments.

"The assault resulted in Uli living the last months of his life feeling afraid, helpless and angry instead of comfortable, safe, loved and at peace," they wrote.

One woman still working as caregiver

Casimero is currently working for a different family as a caregiver, court heard, and that family is aware of her court case.

In addition to the jail time, the judge also sentenced Dumo, Casimero and Borja to one year probation, the terms of which include having no contact with the Wissner family and participating in counselling or other treatment deemed appropriate by a probation officer.

Each woman must also perform 30 hours of community service, the judge ordered.