Canadian Blood Services wants to change a long-standing policy that would allow gay men to donate blood if they have not had sex with a man in the last five years. 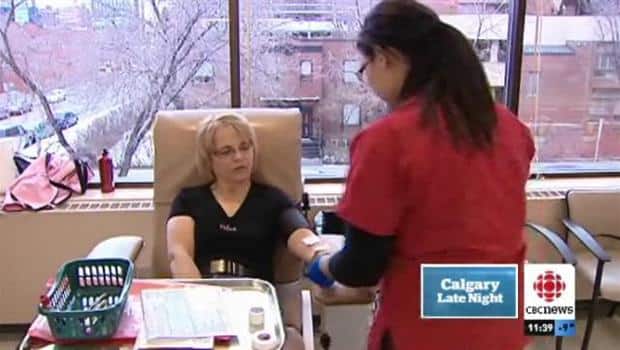 Canadian Blood Services wants to change a long-standing policy that would allow gay men to donate blood if they haven't had sex with a man in the last five years.

It's a change from a total ban on donations from any man who had ever had sex with another man.

"The emotion of this topic needs to go away and the politics of the topic needs to go away," Cress said. "And we just need to see an evidence based decision, which we have the science that backs that a ban is not something that's going to secure our blood system — so just remove the ban."

"The evidence clearly shows decreasing the ban just to five years provides no increased safety for the blood services supply and in fact still contributes to stereotyping of HIV transmission in the country," Cress explained.

Kristopher Wells, a researcher at the Institute for Sexual Minority Studies at the University of Alberta, says the issue has become personal.

"I'm not really sure why we're having this debate here in the 21st Century about whether a gay man should be able to donate blood or not," Wells said. "It's disappointing and makes me feel as though I’m still a second-class citizen in my own country."

Health Canada still has to approve the changes, which will likely happen in the next few months.

If approved, Canada will follow other countries, such as Australia and the United Kingdom, that have already reduced their lifetime bans.

But Canadian Blood Services says it’s not a good idea to lift the ban yet.

"We don't have sufficient evidence to be able to convince either Health Canada, frankly, [or] the recipients of blood products, that that's a safe thing to do at the moment," Dana Devine, vice president of medical, scientific and research affairs said.

"Doesn't matter whose blood it is, when you need blood, there should be blood available," Wells said.