Fred Sutherland of Alberta served in the air force squadron that took out several of Hitler's water reservoirs during World War II.

'I couldn't help but get tears in my eyes,' says Fred Sutherland of Alberta

He was only 20 when his crew flew over a German dam, a key part of Hitler's industrial war machine.

His plane dove down and dropped a new high-tech bomb that skipped across the water before exploding.

"I was scared, I was really scared," Sutherland said. "But you can't say, 'Oh, I want to go home now.' You made up your mind and you can't let the crew down."

Fifty-three of the 133 members of Squadron 617, later known as the Dambusters, were killed. Thirteen of them were Canadian.

On the ground, at least 1,300 people died in the bombings and subsequent floods.

On May 16, 1943, he remembers his plane jumping after shedding the weight of the bomb. They climbed out of the gully to get back into the sky.

A front gunner, Sutherland watched as another plane, filled with his colleagues, exploded.

To this day, Sutherland tries not think about what happened 75 years ago. He rarely tells his story.

But he had to remember this week. His local legion in Rocky Mountain House, Alta., held a celebration to honour Sutherland.

A renowned painter, Dan Llywelyn Hall, has made a portrait of Sutherland, which was unveiled Thursday and will be donated to the Bomber Command Museum of Canada in Nanton, Alta.

"A couple nights, I haven't slept for this business going on here," Sutherland said. 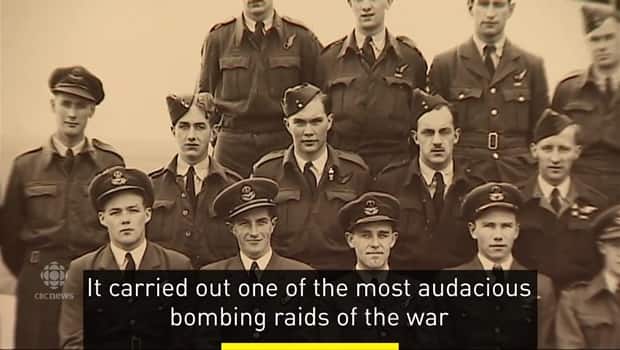 Sutherland now lives in Rocky Mountain House, far south from his hometown of Peace River, Alta. His daughter, friends and neighbours gathered to watch the unveiling.

"I was pleasantly surprised," he said. "I couldn't help but get tears in my eyes."

He said the crowd was "so welcoming, friendly. It was just amazing to me."

He's one of only two Dambuster veterans still alive. The other is in the United Kingdom.

That's why Hall wanted Sutherland's community to have the painting. He made a special one for Sutherland to keep himself, as well.

"I had to include Fred, of course, because it completes the circle for me," Hall told the Calgary Eyeopener.

Hall, who has painted the Queen, dedicated the last few months to painting each of the 133 Dambuster squadron members. The paintings will be shown at the International Bomber Command Centre in England.

The Welsh painter tracked down photos of each man, speaking with family members and reading scraps of newspapers to learn about each person.

The Dambuster raid has been marked in history as one of the most successful and technically unique military operations. It used a new method of "bouncing" the bombs to their targets.

But Hall wants people to remember not just the group, but the individuals, a third of whom were Canadian.

"There was all this sense of trepidation and anticipation in their eyes," he said. "I thought that maybe the paintings could, in some way, reinvigorate the memory."

Sutherland says his crewmates had a lot of courage and went in knowing they had a small chance of returning from the risky mission.

In a later operation, Sutherland bailed out of his Lancaster bomber. He spent three months with the plane's navigator trying to escape Nazi-occupied Europe.

"People like that, you just remember them forever," he said. "He and I became best of friends after the war."

Still, Sutherland has considered the complicated legacy of the raid. Aircrew heavily damaged two of three dams key to Hitler's wartime industrial machine. The blow was a critical morale booster on the home front back in England. But many died, and the war continued.

"If you think something's right, you're going to fight for it," he said. "I don't know the answer, but I know I'd do it again, even knowing what it was like."