Experts at the Calgary Zoo are busy poking and prodding the next group of fishers that they’ll send to the United States, where the weasel-related animals are being re-introduced after decades of near-extinction.

'They really are beautiful little creatures'

Experts at the Calgary Zoo are busy poking and prodding the next group of fishers that they'll send down to Washington, where the weasel-related animals are being re-introduced after decades of near-extinction in that state.

Over-trapping and habitat loss caused the species to become virtually extinct in Washington State in the mid-1900s, but the Calgary Zoo is participating in a multi-year project to reintroduce the cat-sized critters — which are still thriving in Alberta — to the forests on the Olympic Peninsula and near Mount Rainier in the South Cascades south of the border.

Before they go south, they get veterinary checkups at the Calgary Zoo and get equipped with radio transmitters to track their movements over time.

"He's getting antibiotics. He's getting a vaccine," said head veterinarian Dr. Sandie Black as she oversaw the examination of one of the animals earlier this week.

"He'll have a little patch on his belly shaved. He'll have an incision that is two to three centimetres long and a transmitter that is dropped into his abdomen." 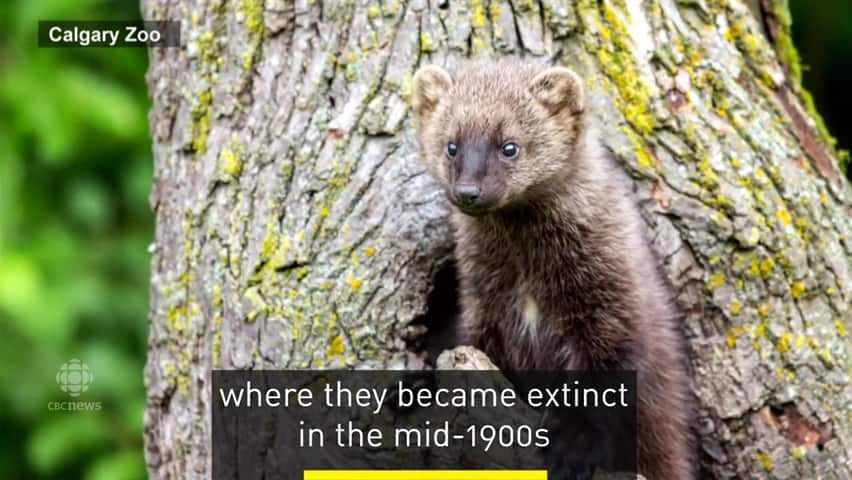 2 years ago
2:07
Experts at the Calgary Zoo are busy poking and prodding the next group of fishers that they'll send down to Washington. 2:07

The elusive carnivores prey on various small animals, such as mountain beavers, squirrels and snowshoe hares, and are one of the few predators of porcupines. Despite their name, they don't actually eat fish.

Black says it's important to repopulate habitats like Washington State where they've disappeared.

"They're part of an intact ecosystem. They're something that existed there before. They're a mid-level carnivore, so they have value within the ecosystem, as well as just intrinsic value … they really are beautiful little creatures," she said.

"And very, very wild. They're sort of representative of an ideal, I think, that people value in having intact wilderness with an intact ecosystem behind it."

Two dozen of the animals were released into the wild in Gifford Pinchot National Forest in 2015 and 2016, and another 46 were moved there, and to Mount Rainier National Park, in the following two years.

"As one of Canada's leading conservation organizations, we are delighted to lend our expertise in the field of reintroduction science to this international collaboration focusing on this endangered species," said Dr. Clément Lanthier, president and CEO of the Calgary Zoo, said in a release last year.

"Fishers know no borders, and it is only when we work together without divisions that we can truly make a difference for species at risk around the world."