A broadcast audience of more than 100 million fans will be watching the Super Bowl this weekend and they will get a glimpse of two mascots made right here in Calgary.

About 35 years ago, they made a Harvey the Hound mascot. That was just the beginning. 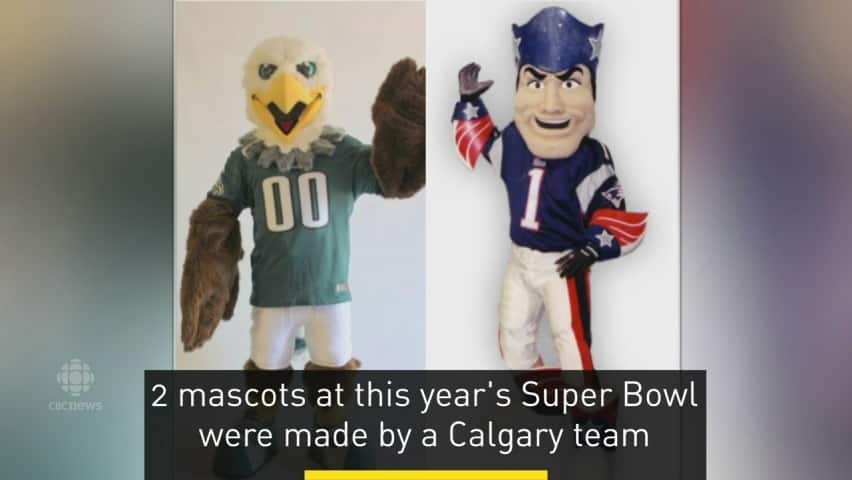 This story was originally published on Feb. 1.

A broadcast audience of more than 100 million fans will be watching the Super Bowl this weekend and they will get a glimpse of two mascots made right here in Calgary.

Street Characters Inc. in northeast Calgary — one of the leading mascot companies in the world — created Swoop for the Philadelphia Eagles and Pat the Patriot for the New England Patriots.

Rob Hayward is a prop maker who worked on Pat the Patriot. He says the idea of seeing his work in the big game is still a little unreal.

"Sitting there, watching one my creations up on the screen, I get bragging rights. Ah, look at that. It's mine. It's mine," he told CBC News on Thursday.

"It's amazing. I have friends who are huge Patriots fans. I got to work on Pat Patriot last year. He is one of my favourites. It's great to see them get to the Super Bowl."

This isn't the Street Characters team's first rodeo. They are responsible for the Calgary Flames' mascot, Harvey the Hound, about 35 years ago.

Today, while they get about 85 per cent of their business stateside, they work for mascot-needing customers around the world.

"They are crazy about their mascots," production manager Kent Anderson said of U.S. clients, which include sports teams and corporate customers.

"There is no limitation on how many mascots the market is asking for. The attention to detail is on quality. That's what gets us our business."

Anderson says word of mouth is their bread and butter.

"People are coming to us. More of our business is referral. When you have been in business for 30 years and you have a reputation of making mascots that can stand up to any abuse, then people come to you and they want you to build their mascot."

And the client relationship doesn't end when the first version of a mascot heads out the door.

"We have a mascot spa," Anderson explained.

"We can revitalize any mascot that gets beaten up or dirty."

Hayward has seen a lot of high profile mascot work in his time with Street Characters.

"We see A&W Root Bear coming through here a lot. Energizer bunny, we did one for New York Fashion Week. I got to do the Miami Kingfishers, which is David Beckham's new team. San Francisco 49ers, New York Islanders," he said, eyes lighting up.

"I just get star-struck all the time."

Before getting into the mascot biz, he had no idea how much work went into them.

"Most people take a look at a mascot, and quick glance it just looks like a costume. But the skill and creativity that goes into them, it blew my mind. Working in here, you are like a kid in a candy store."

Hayward says that when a good performer gets inside one of his costumes, they can make it their own.

"Mascots are real. The performer, when they step inside, it's a character. It's a real entity. You can't let that slip," he said.

Anderson says that while they have competitors in Edmonton and Toronto, business here in Calgary is booming, thanks in part to their in-house concept artist.

"Sometimes they don't even have an idea," he said of some clients.

"But anything you can dream, we can build."

With files from CBC's Dave Will