A bit of a Cinderella story has been unfolding this week for Calgary's only professional soccer team.

Supporters gave the team a 4% chance of winning their division, so they did just that 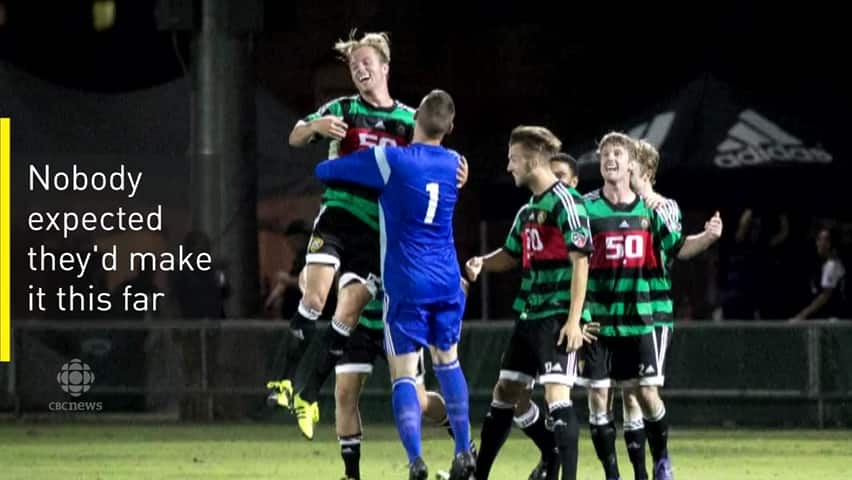 A bit of a Cinderella story has been unfolding this week for Calgary's only professional soccer team.

Calgary Foothills FC U23 has only officially been a part of the Premier Development League for two years.

Supporters polled early in the season gave the team a four per cent chance of winning their division but now they have made it to the semifinals, one of the final four teams in the league, and the underdogs are in it to win it.

Midfielder Elijah Adekugbe says the journey has been a bit surreal.

"Last year we struggled a bit with scoring goals and we tied a lot of games so obviously we weren't expecting to make such a giant leap so quickly," Adekugbe told CBC News at a practice Wednesday.

"We were just hoping to make playoffs but now we've exceeded that of course. It's just, we're taking it in."

"We set benchmarks along the way," Wheeldon said.

"Every time we hit a target we set a new one, so now we are in the final four, we are in it to win it."

What the key to their success this year?

"We have got a hotbed of talent here in Calgary. Canadian soccer is alive and well," he explained.

Adekugbe says it's about believing you can do it.

"Well I think we just started to believe in ourselves, believe in the abilities that we have as a team, actually realize that we are a good team, we have good players that can compete in this league," he said.

"And, just something about once you start winning, it's like contagious, right? So it infects the camp and everyone just has that winning mentality and we want to win every game now, and it's just," Adekugbe said, pausing.

Kickoff is 3 p.m. MT, and the match will be live streamed on YouTube.

The Calgary Tower will be lit in green and white in support of the team Saturday night.

With files from CBC's Diane Yanko and Justin Pennell