Some Calgarians say they are heartbroken over the loss of matured trees after heavy, wet snow caused widespread damage in the city.

City says about 3,800 'tree emergencies' were called in for snow damage 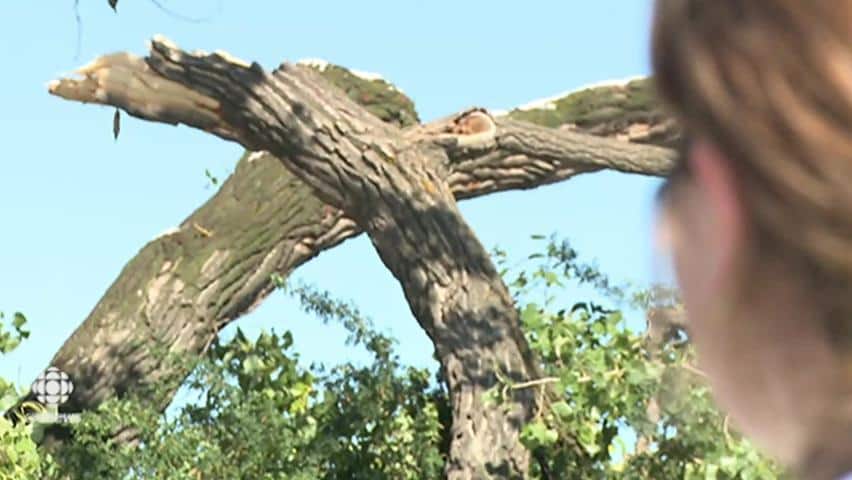 6 years ago
2:03
The recent snowfall caused widespread damage for many of the older trees in Calgary, and some residents say it's "heartbreaking." 2:03

Some Calgarians say they are heartbroken over the loss of matured trees after heavy, wet snow caused widespread damage in the city.

"Me and my husband went walking last night and kind of looked at the carnage and then we walked past here and it actually made me get teary cause we just saw this giant chunk of this tree come down," said resident Sheena Johnson, adding the Cottonwood tree has been in the northwest community of Crescent Heights for roughly a century.

"It's just sort of a special centrepiece. I mean we really have treasured it, so I don't even know if it will be able to survive this."

Johnson won't know if the tree can be saved until the city comes to survey the damage.

The city says about 3,800 "tree emergencies" have been called into its 311 line. The scale of the damage is so great that the mayor is asking for people's patience and help.

"If it's safe, you can now start to pick up and take tree debris to City of Calgary landfills. If you've got a truck, and you're willing to help out your neighbours, this would be a great thing to do."

Nenshi said it will take days — maybe even weeks — to clear away the broken tree branches scattered on roads and sidewalks around Calgary.

Chainsaws were buzzing in many city neighbourhoods today as work crews started getting fallen tree limbs off of streets.

Residents can take branches to city landfills for free, or cut them into pieces smaller than 1.2 metres and stack them beside garbage and recycling bins. It might take awhile, but officials say city crews will eventually pick them up.

The city is also asking people not to put trees and branches in the black, blue or green carts.

"We run the risk of breaking the carts and more importantly, or as importantly, is breaking our vehicles if they are in those carts," said Dave Griffiths, the head of waste and recycling services.

"And we want to be able to maintain our operations and work on the plan to get those collected over time ."

All of the city's leaf and pumpkin drop-off locations will also begin accepting tree debris on Saturday.

"It's sad to see those trees come down," said landscaper Byron Wickerson. "Some of them, you know, they might replant them — but it's going to take another 40 or 50 years for them to come back."

Troy Hillman, an arbourist who was dropping off debris at the Spyhill landfill, agreed it's tough to see.

"I'd say there's a couple of hundred thousand trees damaged. I'm guessing, but I mean ... there's probably about 200 trees just down on my block and around my block. It's ugly. So we're hoping to get it cleaned up and hopefully we can save some of these trees and we don't have to cut them all down."

He said he even had customers call him crying because they had their trees for so long and now they are destroyed.

Kath Smyth, a horticulturist with the Calgary Horticultural Society, says for broken trees it's best to use a proper pruning saw.

"Make sure they take as little bark as possible, push the bark back up onto the tree," she said. "It will help it. And you know gauze bandage — a little bit of gauze bandage for about a week to 10 days will help it substantially."

Smyth said for her Braeside backyard, which was once an oasis of peace, a certified arbourist is coming to take care of her trees at a cost of about $4,000.