'Go back with an open mind,' says artist behind controversial Bowfort Towers

The New York City artist behind the controversial 'Bowfort Towers' in Calgary isn't concerned by controversy surrounding his public art installation, noting it isn't complete and often art "grows on you." 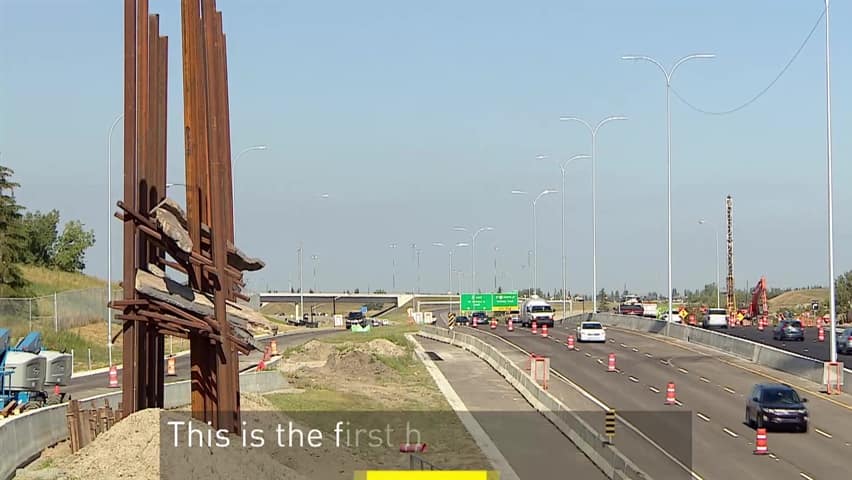 The New York City artist behind the controversial 'Bowfort Towers' in Calgary isn't concerned by controversy surrounding his public art installation, noting it isn't complete and often art "grows on you."

"This is an art work like any art work. If you walk into a museum and you don't know what it is about, maybe the next time you'll see it, you'll get it, you'll get aspects of it," he said.

"Often it takes a number of visits and it grows on you."

Bowfort Towers is one of two new pieces of public art on display as part of the new interchange at the Trans-Canada Highway and Bowfort Road N.W.

"I travel to various places and try to find a context of the earth which connects to the place specifically," Geist said.

"I have had lots of people say wow, this really works, and they go into a narrative about all the aspects of how it works and they're right on the mark of where I wanted. So, some people miss it. I say go back with an open mind and look at it."

Marks the entrance to the city

His sculpture incorporates Rundle rock stones, which are found only in Alberta. The stones were gathered from the personal collection of geologist Louis Kamenka at the Kamenka Quarry near Canmore. There are imprints of fossils and even subtle ripples in the rock from the prehistoric river they once sat in.

"The notion was to mark the entrance of the city using something that is specific to the region," Geist said.

Earlier in the week, a city spokesperson said Geist drew inspiration from the Blackfoot people. But Geist clarified those remarks.

"It was not inspired by Blackfoot art and in fact I don't think it was stated that way. We did meet with Blackfoot peoples all along and we had conversations … Four is an important symbol to the Blackfoot peoples and there's four towers to align with that symbolism."

Although the installation isn't complete, the criticism has begun.

Kalum Teke Dan, a Indigenous artist in Calgary, described it as an "eyesore under construction."

"They should have worked with an aboriginal artist actually to kind of get it accurate. It doesn't look like anything really," he said. ​"It's awesome for them to invest in art but they should go to the community. We grew up here, we know about the city."

"Initially I thought it was, you know, a paper weight. They put a rock on top of something, the leftover metal, to put the stuff on the ground [so it is] not getting blown away," Chu said.

One per cent of the capital budget for every infrastructure project is dedicated to public art. With the cost of the interchange project coming in at $71.7 million, both the Bowfort Towers and the yet-to-be-completed drumlins came in under budget at $500,000.

"It's the wrong time. We have thousands of Calgarians losing jobs and we pour more salt on the wounds," said Chu.

And he warns, art shouldn't be judged until it's complete.