After Daniel Haworth suffered a head injury at the hands of a Calgary police officer, he became forgetful to the point where he lost all memory of the violent arrest and was never the same afterward, according to his brother.

After Daniel Haworth suffered a head injury at the hands of a Calgary police officer, he became forgetful to the point where he lost all memory of the violent arrest and was never the same afterward, according to his brother.

Const. Trevor Lindsay is on trial on a charge of aggravated assault, accused of using excessive force during his May 2015 arrest of Haworth.

Haworth, who has since died of a drug overdose, suffered a fractured skull and a brain injury after he was punched four times by Lindsay and then thrown head first, while handcuffed, onto the pavement.

On Wednesday, the officer who investigated Lindsay and ultimately laid the charge testified that Haworth was unable to give a statement about what had happened to him because he had no memory of the arrest.

"He'd obviously suffered an injury to his brain," Det. Kelly Doyle said under questioning from prosecutor John Baharustani. "[Haworth] was not being unco-operative in any way shape or form."

Doyle said he visited Haworth in the hospital every day.

On May 25, 2015, Lindsay and his partner arrested Haworth for theft, suspecting him of breaking into his ex-girlfriend's home and stealing coins from her collection.

Haworth was intoxicated at the time and police brought him to the arrest processing unit (APU). Surveillance videos from both APU and the neighbouring library depict the parking lot incident that led to Lindsay being charged.

While Haworth was handcuffed and pushed up against the police car, Lindsay punched him several times in the head before throwing him, head first, onto the pavement.

Lindsay told other officers he did this because Haworth had spat blood at him. Baharustani suggested in his opening statement it was Lindsay's first punch that caused Haworth to bleed. 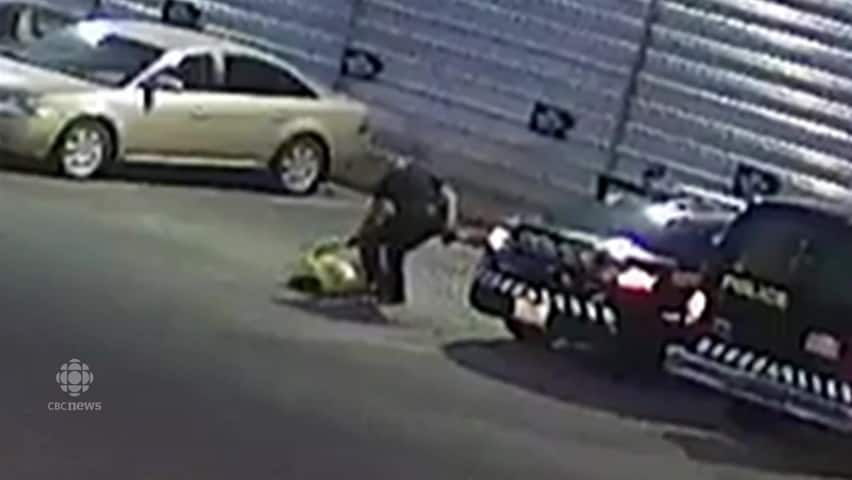 4 years agoVideo
0:42
This graphic security footage shows what appears to be a Calgary police officer punching a man repeatedly before throwing him on the ground. 0:42

Defence and Crown will both call police use-of-force experts. They are expected to disagree on whether Lindsay's actions were considered reasonable or excessive.

In June 2015, after gathering evidence — officers notes, reports, surveillance videos, 911 call recording, dispatch tapes — and in consultation with a lawyer for the Calgary Police Service, the Edmonton Crown's office, and the Alberta Serious Incident Response Team, Doyle made the decision to go ahead with criminal charges against Lindsay.

Ten days after Haworth was injured, Lindsay was arrested and charged. Doyle said Lindsay "did not wish to provide a statement at that time."

Robert said his brother became a loner after he suffered his brain injury and was "not the same outgoing person."

Haworth stopped joking around, and memory loss meant he kept a notepad with him at all times, according to Robert.

Lindsay is currently suspended with pay from the Calgary Police Service.