84% of people killed by Calgary police have mental health or drug problems, and it could be higher

Nineteen people have died at the hands of Calgary police since 2000, many of the victims suffered from mental health problems or substance abuse issues. The family of one of the victims says police actions were excessive and unlawful.

19 people have died at the hands of the Calgary police since 2000, a CBC News investigation has found 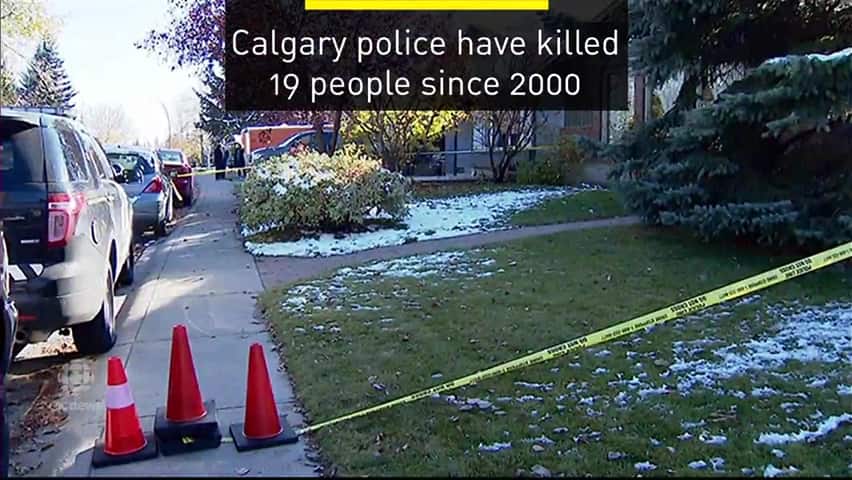 This story is part of Deadly Force, a CBC News investigation into police-involved fatalities in Canada.

A comprehensive national database assembled by CBC News shows that 70 per cent of the people who died in police-involved fatalities struggled with mental health or substance abuse issues, or both.

In Calgary, the number is 84 per cent — but could be higher because the mental health and substance abuse involvement are unknown in three of the 19 cases.

The number of police-involved fatalities spiked in Calgary in 2016 with five, the highest number recorded over the nearly two-decade span.

The increase prompted a call from the police chief in May 2017 for an independent review of the service's use-of-force policies.

Retired chief justice Neil Wittmann is heading up the review and is expected to finalize his report later this month or next, according to Calgary police Chief Roger Chaffin.

"I am compelled to ensure our members have the correct leadership, policy, procedures and equipment — as well as training — to ensure that we are policing the community in the safest, most contemporary way possible," Chaffin said in a news release at the time.

In an interview with CBC News on March 26, Chaffin said the recommendations could change the way officers respond and act during their encounters with people in crisis.

"The kind of recommendations we may be able to look at [might indicate] what can we do differently to not put us in positions where, perhaps, where force is inappropriate or perhaps force wasn't the best solution to any given situation," said Chaffin.

Chaffin stressed the review would not "examine" the specific conduct of officers involved in the most recent fatalities. He would not answer any questions about specific officer-involved fatalities.

One of the most high-profile officer-involved shootings in Calgary involved Anthony Heffernan.

The 27-year-old was Tasered twice and shot four times in his northeast motel room.

He had missed his checkout time on March 16, 2015, and motel staff called 911 after getting no response from his room.

Officers kicked in the door and within 72 seconds a Taser had been deployed and six shots were fired — four of them stuck Heffernan in the head, neck and chest.

Heffernan's family has asked why the officers didn't first try to detain Heffernan and why they chose lethal force so quickly.

Heffernan was holding a cigarette lighter in one hand and a needle-less syringe in the other.

"You shouldn't have to be killed because you have a drug addiction," said Pat Heffernan, Anthony's father.

An ASIRT report into the police officers' actions described Heffernan as a known IV drug user who was "unresponsive, irrational and non-communicative."

The report said he had a number of needle and puncture marks on his body and the toxicology results revealed significant levels of cocaine in his system.

While the ASIRT report concluded there were reasonable grounds to believe that an offence or offences under the Criminal Code had been committed by police, the Alberta Crown Prosecution Service determined there was no reasonable likelihood of conviction and recommended that no charges be laid against the officer.

The Heffernan family has filed a statement of claim against the officer who shot Anthony. Also listed is Paul Cook, the acting police chief at the time, and five other individuals.

According to the claim, filed in Court of Queen's Bench, the family says the officers' use of force was excessive, unlawful and unnecessary.

A statement of defence denies all of the allegations made in the claim.

"Mr. Heffernan, despite being challenged and warned to stop what he was doing, continued to act in a manner that created a risk of serious injury to the defendants," read the statement of defence.

The statement also says the officers attempted to use non-lethal force to gain control over Mr. Heffernan but were unsuccessful.

"Cst. McLoughlin, recognizing that risk of serious injury and the failure of other means to control the behaviour and actions of Mr. Heffernan, fired his service handgun multiple times, striking Mr. Heffernan," read the statement.

Pat Heffernan says the high percentage of people killed by police who suffered either mental health problems or substance abuse issues or both indicates that officers need better training to deal with people who are in crisis.

"They confront the situation as if it's a criminal they're dealing with rather than a person who might be having a mental episode or a drug addiction," said Heffernan.

Chaffin — who again refused to comment on specific cases — offered a general comment when asked if he is prepared to defend officers who face allegations of excessive or unlawful use of force.

"What we're prepared to do is be completely accountable for what we did and what our role was in any given situation," he said.

"I fully appreciate any family who has suffered such a loss that someone in their family would die as a result of an encounter with police that they want to be heard, that they may want to exhaust other legal means to be heard, and I respect that we will be fully accountable to that process."

A former Calgary police inspector and chief of the Moose Jaw, Sask., police force has been pushing for better training for officers to deal with increasing calls involving people who are in crisis. He says improved communication skills for officers are vital — something that could even be determined at the recruiting stage.

Terry Coleman, who now works with the Canadian Association of Chiefs of Police, has been called as a use-of-force expert in many fatality inquiries and inquests.

"Many of them could have been resolved differently, more peacefully and without someone certainly getting killed," said Coleman.

He says some officers are just naturally better at resolving crisis situations — or at least preventing it from escalating to a point where serious injury or death can result.

Coleman says some officers are generally not good at tactically retreating from those situations and some are in too much of a rush to resolve them.

The Heffernans, who met with Wittman last year, are hopeful recommendations will be made to prevent another officer-involved shooting like the one that killed Anthony. But they are skeptical as to whether police will adopt them.

No officer-involved fatalities in 2017

Chaffin didn't want to comment about the fact that no one was killed by Calgary police in 2017.

He says many encounters last year could have ended differently but for whatever reason his officers chose non-lethal force.

"I try not to measure the good years against the bad years," said Chaffin.

The day after Chaffin's interview with CBC, an officer was involved in a shootout with a robbery suspect in the northeast community of Abbeydale.

The suspect's body was found in a burned-out garage.

The officer who was shot in the incident was released from hospital on Tuesday.

The Alberta Serious Incident Response Team has taken over the investigation.