The Calgary Police Service is reviewing a weekend incident at a mall involving an unmasked on-duty officer who criticizes stores that enforce the City of Calgary's mask bylaw.

The Calgary Police Service is reviewing an incident at a mall on the weekend involving an unmasked on-duty officer who criticizes stores that enforce the City of Calgary's mask bylaw.

The officer, Const. Ryan Lashbrook, was recorded saying "shame on" stores that turn away unmasked customers.

"If a store's policy is you have to wear a mask and they won't let you in, if they're willing to toss away sales and a customer base because of that, shame on them," he says.

Lashbrook was patrolling Chinook Mall during an anti-mask protest on the weekend when he spoke with Brett Forte, who surreptitiously records video for Instagram's @calgaryevents segment, Stories That Matter. 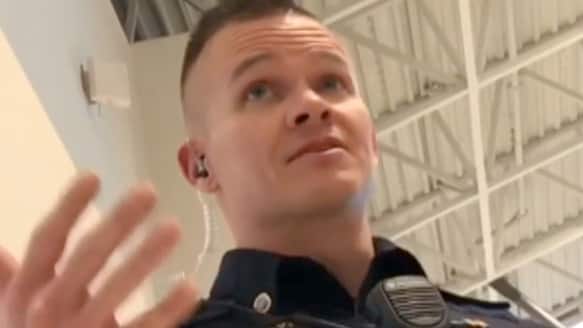 1 month agoVideo
1:33
Calgary police say they are reviewing the incident after Const. Ryan Lashbrook was filmed over the weekend. 1:33

Lashbrook also calls government-mandated vaccines "scary" on the video, although Dr. Deena Hinshaw says she could not imagine a situation where that would happen.

Alberta's chief medical officer of health supported Health Minister Tyler Shandro earlier in September on that front, saying they would both support repealing a piece of legislation that gives the government power to make vaccines mandatory.

Asthma 'doesn't have to be diagnosed'

The 13-year CPS officer suggested he suffers from self-diagnosed asthma.

"I have no problem telling you that I have asthma," Lashbrook says to Forte.

"It becomes a mental game of claustrophobia with my face, mouth, nose and mouth is covered.… I'm breathing back in what I'm exhaling, my breaths get shorter, my breathing increases, my heart rate increases. So therefore, to me, I'm like, that's a medical condition. It doesn't have to be diagnosed."

Lashbrook also takes issue with the section of Alberta's Public Health Act that gives the government the power to order immunizations during a public health crisis.

"It's just scary. Scary that these things are in place," he says.

In a written statement provided to CBC News, CPS says it is looking into the incident but the officer's privacy rights will prevent the service from sharing the outcome.

"The Calgary Police Service requires members to wear a face covering during all interactions with the public, as well as while in public indoor spaces. As with all policies, exemptions exist for medical conditions," reads the statement.

"The service continues to work closely with provincial health officials to ensure our members, as well as the public we interact with, are protected from COVID-19, and that we are doing our part to reduce exposures of this virus."

As per CPS policy, medical exemptions for officers must be approved through the service's health management unit.

Officers must provide proper documentation to their direct supervisor to qualify for an exemption.