A Calgary police officer who was convicted of assault for the violent arrest of a man whose ribs were broken and lung collapsed has had his appeal dismissed and must begin serving his sentence.

A Calgary police officer who was convicted of assault for the violent arrest of a man whose ribs were broken and lung collapsed has had his appeal dismissed and must begin serving his sentence.

Const. James Othen was found guilty of assault causing bodily harm and assault with a weapon for his role in the 2016 arrest of Clayton Prince.

Defence lawyer Alain Hepner appealed that conviction to the Court of Queen's Bench.

Othen was sentenced to 90 days in jail but was granted bail pending the outcome of his appeal.

The arrest took place after Prince ran from police during a traffic stop in 2016.

Clayton Prince was unarmed when he was arrested by constables Othen, Kevin Humfrey and Michael Sandalack in July 2016. Humfrey and Sandalack were also charged but were acquitted by Judge Margaret Keelaghan.

Video of the incident shows Othen jumping on Prince's back and delivering punches after the suspect had surrendered on the ground. 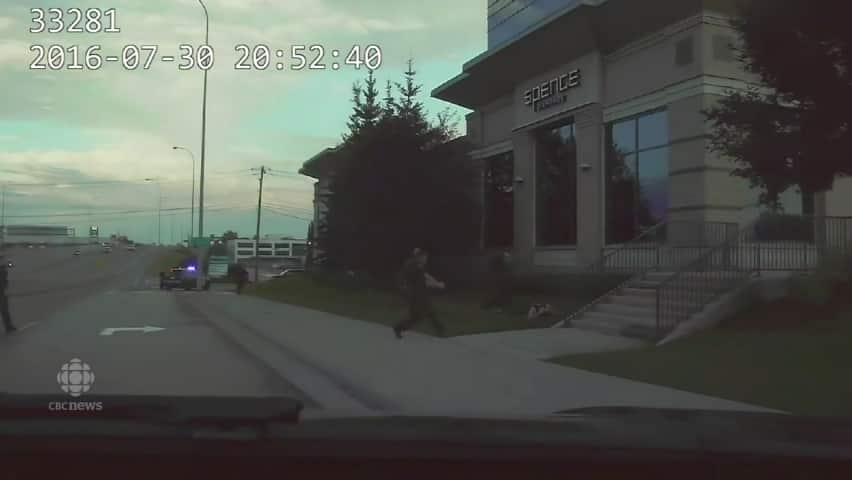 4 years ago
0:07
Video entered as evidence at the trial of three Calgary police officers accused of assault after a traffic stop. 0:07

Ultimately, Hollins found the trial judge did not err when she found Othen's use of force "excessive, unnecessary and clearly disproportionate to what was required in the circumstances."

"I agree with defence counsel that we cannot expect perfection of police officers who are called upon to make very impactful decisions with little time to react, much less analyze, what are often dangerous situations for themselves and others," wrote Hollins in her decision.

"However, there are legislative and jurisprudential limits on the peace officer defence and for good reason."

Othen remains suspended without pay from the Calgary Police Service pending the outcome of an internal investigation.

Video of arrest cuts off

Othen was also convicted of assault with a weapon for digging a key into Prince's neck.

The Calgary Police Service began its investigation after dash-cam video from one of the responding cruisers surfaced, showing the officers delivering knee strikes and punches to Prince, who had surrendered on the ground.

The video cuts off after about eight seconds.

At the time of her decision, Keelaghan said she found it "very concerning and troubling that the in-car video cameras in two instances were abruptly terminated at pivotal points during this incident."

The arrest took place when Prince ran from police during a traffic stop.

He said he was was paranoid after taking cocaine and marijuana and had been driving without a licence.

At first, Prince was hiding in some trees but came out after more officers arrived on scene.

When one officer pulled a gun, Prince surrendered on the ground with his hands on his head, complying with police demands. That's when the video shows officers beginning to deliver punches and knee strikes.

On one of the videos played during the trial, Prince can be heard screaming in pain.

The video cuts off soon after Othen jumps on Prince's back and begins to punch him.

Several police officers testified for the prosecution, including CPS members who described the arrest as "out of control" and "extremely excessive."

With files from Lucie Edwardson