Construction, not oil, is king in Alberta's economy

The downturn in the energy industry has been underway for more than a year, but so far Alberta's economy has proven resilient. Unemployment remains below the national average, and despite tens of thousands of layoffs in the oil and gas sector there are still jobs to be had. 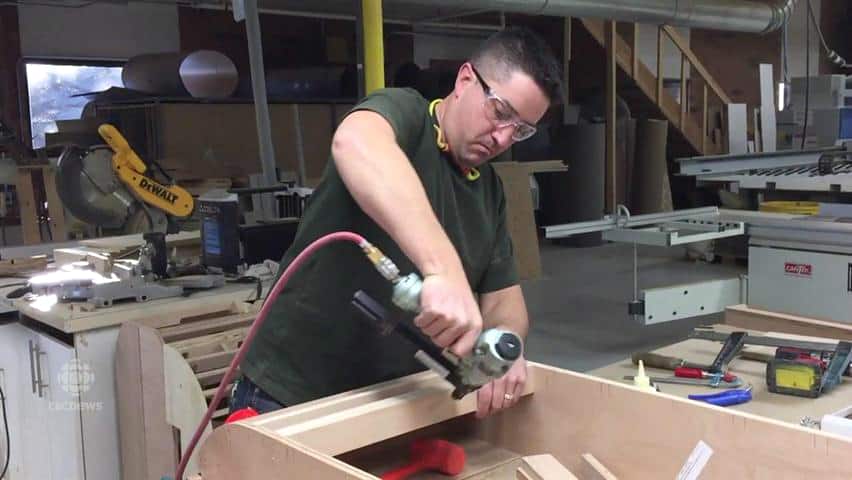 5 years agoVideo
0:38
The current downturn in the energy industry has been under way for more than a year but so far Alberta's economy has proven resilient. CBC's Erin Collins takes a look. 0:38

It isn't easy finding a parking spot at the Calgary headquarters of DIRTT Environmental Services.

Cars are double parked outside the manufacturing company's southeast Calgary offices, while inside workers race to meet the growing demand for the custom building interiors fabricated there.

For DIRTT's president Scott Jenkins, thoughts of an economic downturn couldn't be further away.

"I think we are a great testament to the strength of the economy in this city and — yes — there are challenges right now, but there are companies like us that are thriving."

"We are a technology company, in manufacturing, based in Calgary and we are growing rapidly."

It's a tenfold increase that has occurred amid two downturns in the local energy industry.

7% of Albertans work in oil and gas

University of Calgary professor Trevor Tombe isn't surprised. The economist says only about seven per cent of Albertans work in the oil and gas sector — a number that he says surprises many.

"We have a fairly diverse workforce, the most diverse in the country in terms of how evenly employment shares are spread across sectors."

Tombe points out that oil and gas and mining combined accounted for just 175,000 jobs in Alberta last year, the fifth largest sector behind construction, health care and retail.

Here is a look at how many people work in the top 10 sectors of Alberta's economy:

Tombe says that diversity of employment is why Alberta's economy has fared relatively well, despite the downturn in the energy industry.

Despite those facts, Tombe says, the perception among many is that the oil and gas sector is far more important to the province's economy than it actually is.

"A lot of the bad news that people focus on is concentrated on that one sector, and they neglect that a lot of other sectors are hiring."

And it's not just the manufacturing sector that is faring reasonably well during the latest downturn in the energy industry.

Tourism Calgary's Cassandra McAuley says that, like the manufacturing sector, her industry is prospering during the slowdown, in large part due to a low Canadian dollar,

"The dollar certainly is favourable for people either looking to stay home and do kind of a 'staycation' or for Americans looking to come up and explore what we have," she said.

Those are the precise conditions that have led to a record year at the Calgary Zoo, according to its senior director of corporate services and customer experience.

"We have been surprised by the resiliency. We are actually on track to have the third best year in our history; we are going to sell a record number of memberships this year," said Lindsey Galloway.

For Tombe, the fact that many parts of Alberta's economy continue to fire on all cylinders is proof that the province's economy is diversified.

He adds, however, there is a reason that downturns in the energy industry feel so significant in Alberta.

"The primary issue in this province around diversification is government revenue, so a good fraction of it comes from royalties, and when oil prices fall it presents a huge challenge to the government budget."

It's a problem with a simple economic fix, according to Tombe — implement a provincial sales tax to decrease the government's reliance on funds from energy royalties.

CBC Calgary's special focus on life in our city during the downturn. A look at Calgary's culture, identity and what it means to be Calgarian. It's called Calgary at a Crossroads.