Calgary Tory MLA Len Webber is abandoning his party to sit as an independent in protest against the leadership of Premier Alison Redford.

Veteran Progressive Conservative, unhappy with Alison Redford at helm, to sit as independent 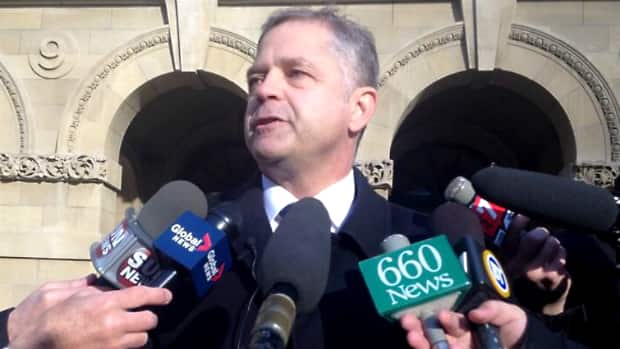 7 years ago
4:07
Calgary Tory MLA Len Webber is abandoning his party to sit as an independent in protest against the leadership of Premier Alison Redford. 4:07

Calgary Tory MLA Len Webber is abandoning his party to sit as an independent in protest against the leadership of Premier Alison Redford.

The 53-year-old backbench representative for Calgary-Foothills says he can no longer be part of the Progressive Conservative caucus led by Redford, who has been dogged for weeks by controversy over her travel expenses.

"She's just really not a nice lady — I can be honest with you there. I cannot work for an individual who treats people poorly, who treats our taxpaying dollars poorly," he told reporters Thursday morning.

"I have heard from my constituents. They have talked to me for the past three, four months angered about what is going on with respect to the abuse — the abuse of government aircraft and abuse of our taxpaying dollars — and I cannot put up with it any longer."

Redford's hastily-organized announcement on Wednesday that she has repaid the $45,000 cost of her trip to South Africa for Nelson Mandela’s memorial after weeks of refusing to do so came amid rumours that some of her MLAs were ready to leave caucus over the issue.

But Redford’s change of heart was not enough to win back the Calgary MLA’s support.

“It wasn't sincere," said Webber. "It was something that was forced and she should have paid it back right away and she never did.... That was the final straw."

Hancock also shrugged off Webber's painting the premier a bully.

"We are all very strong personalities," he said. "That's what you need to get elected and ... to be in this business."

The premier has been under heavy pressure since the South Africa trip, which included first-class flights and the use of a government plane when commercial flights were available, and for her use of Alberta government aircraft on several other occasions.

She had initially rejected calls to personally cover the South African travel expenses, saying the overseas trip was an “exceptional situation” that would not happen again.

But on Wednesday the premier apologized to Albertans, saying she has repaid the costs. She said questions about the trip had become a distraction from her government's agenda.

Last week Redford also said she would repay $3,156 — the cost of flying to Vancouver for an uncle's funeral and for bringing her daughter's friends along on four other trips.

“So she paid the money back and he still is walking across the floor to sit as an independent,” said Mount Royal University political scientist Duane Bratt.

He says there is growing speculation whether Redford will run for the PCs in the next election. There is no constitutional mechanism in the party to remove her. There was a leadership review, but she passed that test with a 77 per cent approval rating.

“It'll be very interesting to see what the PC caucus meeting is like today — if Webber is the first to go, or whether others are going to follow him.”

Political watchers say as many as 20 out of the 60 PC members in the legislature would have left the party to sit as independents had Redford not paid the money back.

The head of the party said he isn't overly concerned about in-fighting. President Jim McCormick says there will always be disagreements.

"We are a big tent party, put it that way. We have a variety of people who aren't shy to express their opinions. I've always believed you talk these things out, I'll say the proverbial Sunday dinner family discussions that sometimes get carried away."

McCormick did say he is still hearing complaints from members about the premier's trip — even after she paid out of pocket to cover the cost.

"I think the conversations and discussions and concerns about the $45,000 will continue."

Party directors are set to hold a meeting this weekend.

Webber said he hopes more MLAs will follow his move.

"Many of them are frustrated, but of course the way this leadership is run is through intimidation and bullying and people basically are, I believe, afraid to speak up and talk and I can't do that any longer," he said.

"I've seen the abuse first hand. Not only to me, but to many others as well. Fits of rage, temper tantrums. It's just something that I cannot support. Something I cannot be a part of any longer."

Political analyst Paul McLoughlin says Webber is making a smart political move considering he is seeking the federal Tory nomination in the riding of Calgary Confederation and was already disgruntled in advance of last November's leadership review.

"He does the pay back now. Gets his kind of revenge on how he felt he had been mistreated over the period of time. He sits as an independent, so he doesn't have those caucus obligations while he's running for the federal nomination."​

Webber is currently on medical leave for a blood and bone infection. He has been off for more than a month and had to undergo two surgeries. He plans to be back in the legislature sitting as an independent in April.

"I am getting stronger and will be back soon," he told reporters Thursday morning.