The newly-opened Kainai Marketplace means that locals on the Blood Reserve, near Lethbridge, have somewhere close by to get groceries. It also means there's 24 more jobs, and a whole lot of pride in the community.

Creates 24 jobs, and lots of pride among the locals in Standoff 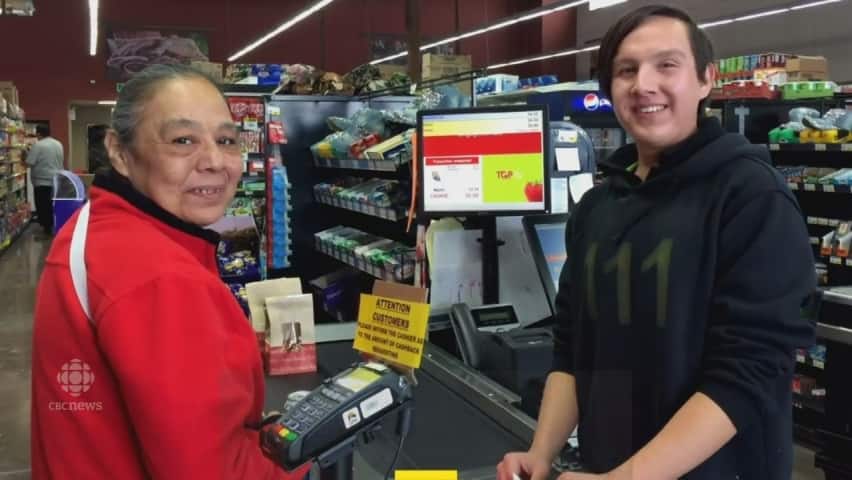 4 years agoVideo
0:40
The newly-opened Kainai Marketplace means that locals on the Blood Reserve, near Lethbridge, have somewhere close by to get groceries. It also means there's 24 more jobs, and a whole lot of pride in the community. 0:40

The people of Alberta's Blood Reserve are already seeing big benefits from the opening of their first local grocery store last fall — including employment, access to healthier foods, and a renewed pride in the community.

Prior to the store opening, members of the reserve had to drive to the nearby communities of Cardston, Fort Macleod or Lethbridge for groceries — a journey that could take an hour, if not two, round trip.

Those without a vehicle relied on the local convenience stores, which only sell processed, pre-packaged foods.

'Working for my people'

Since then, they've had growing community interest in both the grocery side of things, but also in the hot breakfasts and lunches served at the deli.

Kelsey Fingers-Healy, the manager of the deli and bakery, says their regular lunch crowd on a weekday is at least 50 people.

Fingers-Healy had moved off the reserve to Lethbridge a number of years ago, and was working at the Save on Foods in west Lethbridge when he heard about the job openings at Kainai.

"It's working for my people," he said. "At the end of the day, you feel good about helping the people that you're a part of, that are part of your tribe."

So Fingers-Healy commutes to and from Lethbridge every day, and he does so with enthusiasm.

Driving employment where it's needed

The grocery store provides employment to 24 people in the reserve's main town of Standoff. The majority of the employees are tribal members, with the exception of two senior management positions.

"That's something we expected, we anticipated. We really didn't think anyone had experience," said Rob Crow, the director of Blood Tribe Economic Development.

"The intent would be that current managers would shadow someone, so that eventually it would be all Blood Tribe employees, but the majority are."

Assistant manager George Hillier, a non-tribe staff member, says its a privilege to work at Kainai.

"It's something I can look back on in a year's time and think 'Hey, I was a part of this, from the ground up.' So that holds a special place in my heart, for sure."

For tribal councillor Lance Tailfeathers, being able to provide work on the reserve is one of the best things they could do right now — and one part of the approach to fighting back against the reserve's fentanyl problem.

"Some of our employees have ... gone through the rigours of rehabilitation, trying to find meaning, and what they can do to have a more positive lifestyle," Tailfeathers said.

"Some of our employees have said openly, 'I'm going through these struggles. This has given me some hope that I can be in the community and work at something.'"

Former Chief Charles Weasel Head shops at the marketplace regularly and says he can see growing loyalty to the local business.

In addition to the employment opportunities and the healthier food options now available, he believes it's changing people's minds about the possibility of businesses succeeding in the area.

"I think sometimes we're a little skeptical of our own economic development opportunities," he told CBC News.

"I think it provides that sort of pride in your community, that you're able to develop these types of economic development opportunities. It speaks to the very heart of the matter about a resource and an opportunity for our own people to run their own grocery store."

The store was opened with joint funding between the reserve and the province.

The total cost of the new marketplace was $6.2 million, with the province kicking in $1.5 million through the Aboriginal Business Investment Fund pilot program.

The Blood Tribe also contributed $1.5 million and is covering the remaining costs through third-party financing.

Sarah Lawrynuik reports on climate change and is now based in Winnipeg, Man. after five years of calling Calgary home. She's covered news stories across Canada and around the world, including in France, Hungary, Ukraine and Iraq. She has worked for CBC News in Halifax, Winnipeg and Calgary.