From skiing with heart to skiing for heart health

As a lifelong athlete and former Olympian, Jungle Jim Hunter didn't think he was at risk of suffering a heart attack.

As a lifelong athlete and two-time Olympian, "Jungle Jim" Hunter didn't think he was at risk of suffering a heart attack.

A former member of the Canadian alpine ski team dubbed the Crazy Canucks, Hunter was working out at home when the attack struck.

"I came home on Aug. 6, 2012, and I jumped on the bike — and within a minute I was dripping sweat. I rode for about three more minutes and I was just drenched. The only place that was cool to lay down on was the bathroom floor, and I layed down, grabbed my cellphone and called my wife upstairs and ... said 'honey, call 911, I'm in big trouble.'"

Hunter was rushed to the hospital, where doctors inserted two stents.

Since then, he has worked to spread the message of heart health.

This weekend, the longtime Calgarian will be the honorary chair of the 42nd annual Ski for Heart fundraiser benefiting the Heart and Stroke Foundation at Chateau Lake Louise.

The event will be co-hosted by the Eyeopener's David Gray, along with well known former Calgary news presenter Darrel Janz.

The Crazy Canucks were a group of Canadian downhill ski racers who took the alpine world by storm in the early 1980s.

Team members were known for racing with reckless abandon, as well as some of their unorthodox training methods. 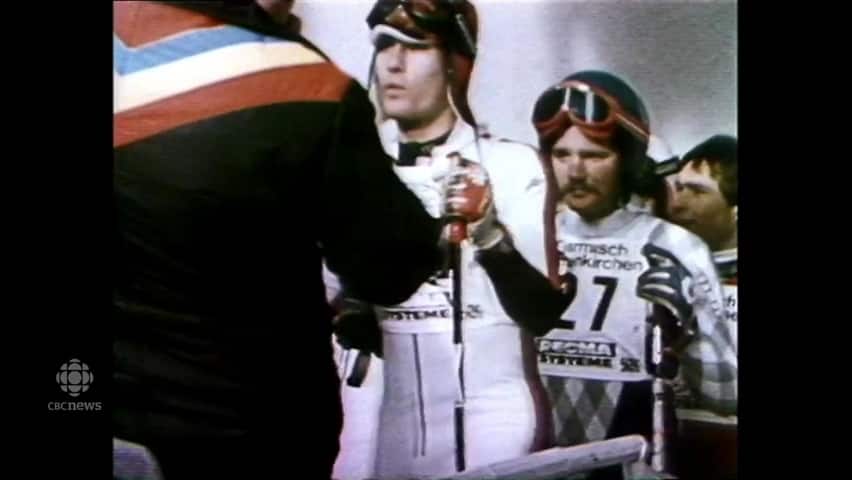 4 years agoVideo
0:32
Four young skiers made their names flying down the most challenging hills in spectacular style, taking the European ski scene by storm in the 1970s. 0:32

The name "Jungle Jim" was given to him by fellow racer Mike Culver after Hunter rode his bike from Calgary to Nelson, B.C., for training — which took four days — while wearing a safari hat.

A newspaper reporter was there from Toronto covering the team and wrote about Hunter's unique training regime. The story ran with the headline: What makes Jungle Jim Hunter go?

The training regime also saw Hunter swim in a glacier-fed lake and run to the top of a nearby mountain each morning before skiing, with the reporter looking on, intrigued.

As a teen, Hunter would also strap himself to the top of his dad's pickup while he drove 100 km/h down gravel roads around his family's Saskatchewan farm to get the feel for speed and better his aerodynamic form — something he says they had to do under cover of darkness so the local RCMP wouldn't see.

He also had a practice starting gate in the loft of a barn.

Training for today's Olympians is a little more scientific, something Hunter doesn't think is necessarily a good thing.

"I don't think today's athletes are as emotionally tough as we were, because we had to earn everything," he said.

"And today there is so much technology and so much analytics, there's so much going on that is almost babysitting our athletes."

He won bronze at the 1972 World Championships.