The Clarion Hotel in northeast Calgary has turned into the ghoulish place to be this weekend.

Around 2,000 turned up for Day 1 on Saturday, similar number expected Sunday 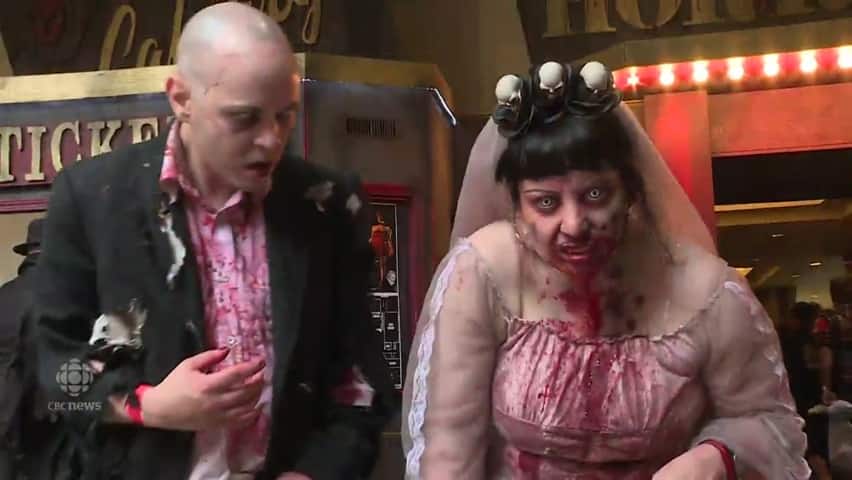 3 years agoVideo
0:34
Around 2,000 turned out for Day 1 of the seventh annual Calgary Horror Con at the Clarion Hotel on Saturday. 0:34

The Clarion Hotel in northeast Calgary has turned into a ghoulish place to be this weekend.

Many in elaborate costume, around 2,000 turned up Saturday for the seventh annual Calgary Horror Con.

Baillie Scillitoe, 19, wasn't yet born when the Hellraiser franchise first launched, but she showed up dressed as the female cenobite, which her parents told her was from "that weird movie that scared us."

"I've just always been a huge fan of horror," she said. "Having that story around something that is normally just gruesome … in horror movies you see what's normally taboo. It's gory but it's fascinating if you're into practical effects. Especially in older movies, they got that stuff to come across, it's really creative."

The two-day event features a number of celebrity guests — including Doug Bradley, who played the iconic Pinhead in Hellraiser — along with a number of panel discussions and some movie screenings.

"It's expanded a lot. When we opened the doors today, the lineup was literally going around the entire complex," she said. "That's really invigorating and enlightening to see because you can tell the horror community is finally growing in Calgary to the extent we want it to."

"It's smaller than a lot of the other conventions but I find it gives it a more personal feel," Scillitoe said.

Calgary's horror convention may be small, but it rivals many others, said actor Dick Warlock, who has appeared in several classic movies like Halloween, The Thing, Escape from New York and Firestarter.

"The crowd has been tremendous," he said. "This show is as good or as big as any I've ever been to."

With files from Mario De Ciccio and Terri Trembath