These could be the spookiest spots in Calgary's most 'haunted' neighbourhood

Calgary, like any metropolis, has racked up its share of terrifying tales through the years — but one southeast community seems to be the city's haunted hot spot, according to a ghost-tour guide. Warning: This story contains details that may not be suitable for children.

Warning: This story contains details that may not be suitable for children 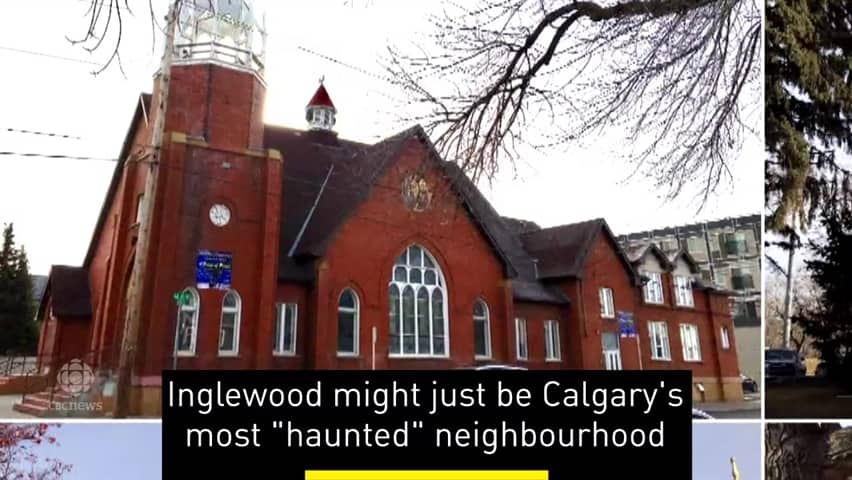 Calgary, like any metropolis, has racked up its share of terrifying tales through the years — but one southeast community seems to be the city's haunted hot spot, according to a ghost-tour guide.

Johanna Lane, owner of Calgary Ghost Tours, has been pulling back the curtain on scary properties around the city for 11 years.

She says Inglewood — perhaps not coincidentally the city's oldest neighbourhood — holds more than its fair share of rich stories that can make your blood run cold.

Lane told The Homestretch they try to validate each story on the tour, using archival material from the Calgary Public Library and the Glenbow Museum.

"We pride ourselves on the historical aspect of the hauntings," she said.

Lane gave The Homestretch a tour of her favourite Inglewood destinations and their scary back stories. Here's a taste:

During the early 1900s, a young, single woman was attending school to become a teacher.

Her school had a morals clause that dictated her behaviour in and out of the classroom, so no funny business was allowed.

The woman met a young man. War broke out and he was shipped off to France, where he died within weeks.

When she learned that she had become pregnant, her school threw her out and her family told her she was on her own.

The woman approached the church that is now All Nations Full Gospel Church.

When they declined to help, she climbed to the top of the church's bell tower and jumped to her death, Lane says.

"She died, but she is still here, we think," she explained.

"They hear the bells go at weird times. A lot of the neighbours have called to complain about the bells. There is only one problem with that.

Under the Zoo Bridge at 12th Street S.E.

In the mid-1930s, six-year-old Donnie Goss was playing with a friend near the Zoo Bridge.

A man approached the two children, trying to lure them with candy and toys. Because he was a stranger, the boys declined his offer, but the man returned days later when Donnie was alone.

This time, because the man was no longer a stranger, Donnie went with him under the bridge.

The man, who later claimed he heard voices and blacked out during the incident, stabbed little Donnie multiple times.

The man then dragged the body across the bridge and buried him in a shallow grave near a children's playground.

To this day, paramedics are called to the area two or three times a year by people who say they've heard a little boy crying for help, Lane says.

Security guards at the Calgary Zoo are said to play with Donnie every now and again, she says. They hear a gentle knock at the door. When they open it, they see no one there, so they throw a ball out for Donnie to play with.

At the end of the day, the ball finds its way back to where they threw it from, Lane says.

"This poor little boy is still wandering around looking for kids to play with," Lane said.

A mother hoping to save her dying children

The building that is now Rouge Restaurant was purchased by A.E. Cross for Helen Macleod, who was then his fiancée and became his wife. He was a veterinarian who had moved from Montreal.

Cross made a huge contribution to Calgary's history in its early years. He was a founding member of the Ranchmen's Club and one of the renowned Big Four who co-founded the first Calgary Stampede in 1912.

He was also an MLA for East Calgary and served on many boards, including the precursor to the Calgary Chamber of Commerce.

Cross, his wife and three young children lived happily in their Inglewood home — until his children became infected with diphtheria.

Cross went to the train station, where the Calgary Tower is now located, to pick up medicine he ordered from Winnipeg. For several days, he waited for the medication to arrive as his children became more ill.

Each day, his wife and her mother would sit by the window waiting for Cross to return.

While waiting for the medicine, two of his three children died.

"Servers in the restaurant now have told stories," Lane said.

"They will be upstairs getting ready for a private function. They head downstairs to take a break and they will hear somebody upstairs moving their stuff around.

"The only thing that is moved are two chairs. They are moved back in front of the window — almost like Mrs. Cross is waiting for her husband to come home."

Staff and guests have also reportedly heard children running around upstairs, she says.

The Suitor House at one time was an isolation hospital for patients with contagious diseases who were waiting to die.

But it was also a boarding house for staff of the railway. Staff would stay for a couple of weeks or months, until they found a place to live.

A young couple once lived on the third floor. The husband would often use the railway to get around the city, jumping on and off railcars.

One day, he slipped and the train ran over his legs. While the general hospital was nearby at the time, next to what is today the Stampede grounds, he died before he reached it.

Many believe today that his wife haunts the house, Lane says. She can sometimes be seen looking out to where the train tracks used to be, near the river, which is now the site of a bike path.

Lane says guests at the bed and breakfast in a neighbouring building have told the owner that the woman who lives next door is very unfriendly. Some have described a young lady with dark, curly hair who has reportedly been seen on the balcony. No such woman lives there, Lane says — not now, anyway.

People who work in the building have reported things upstairs being mysteriously moved, she says.

And, Lane says, visitors have taken pictures of the house that appear to show a young woman looking out the window on the third floor.

It's been a playschool, a doctor's office and a writers society. But long ago, the Alexandra Centre had a caretaker named Joe.

Joe hanged himself in one of the building's stairwells.

At night, caretakers now say they often see something in the shadows, Lane says. People working in the building have reported hearing footsteps, as though someone unseen is walking down a hallway.

"It's almost like he is still making his rounds, even though he's not here anymore," Lane said.