Local Filipino radio has a long history in Calgary. Over the years, most shows broadcast in both Tagalog and English. These shows are a lifeline for some and a "once in a lifetime" for many Filipino Canadians. 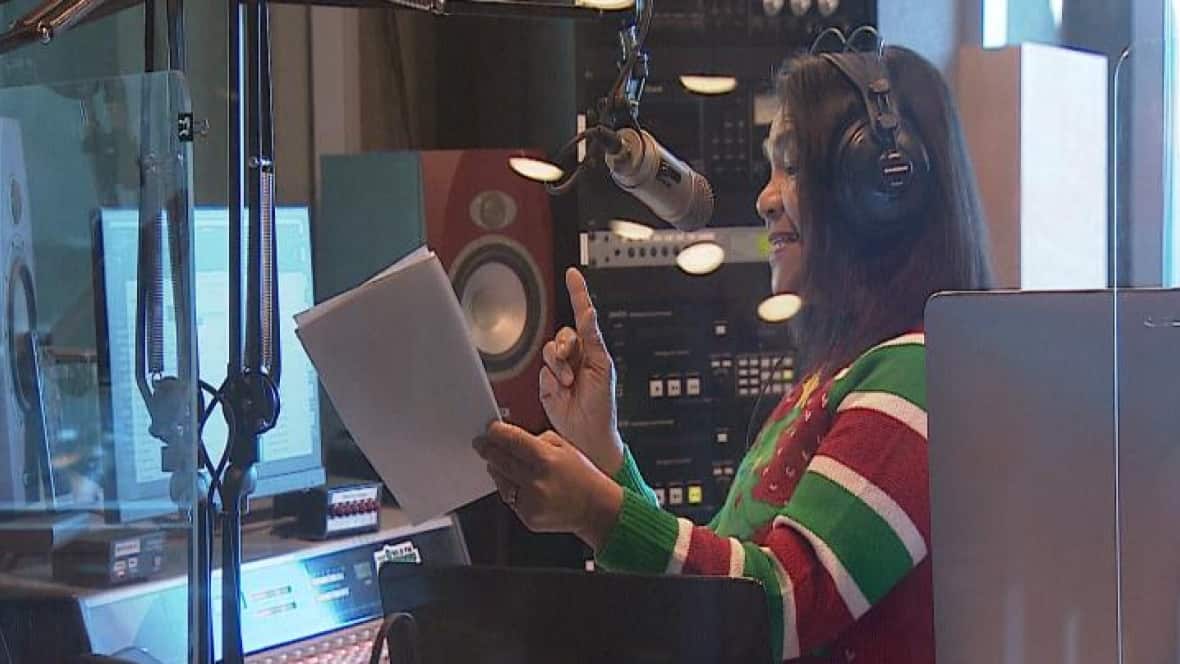 Behind the mic at Calgary's Filipino radio stations

27 days agoVideo
1:13
Meet some of the voices broadcasting over Calgary's radio waves with a focus on the city's large Filipino population, and why some hope to see changes to bring in a younger audience. 1:13

Colourfully dressed in a bright Christmas sweater, DJ Teofy Buluran pulls down the fader on the sound board at CJSW Radio at the University of Calgary. She's just finished a high-energy hour of music and information programmed for the Filipino community of Calgary.

"We are reaching out to all the Filipinos community because of the sadness that they have been experiencing, being far away from their loved ones," says Buluran, who immigrated to Canada in 1984 and is the mother of six grown children.

"So this is another way of reaching out to them, especially in this pandemic of this COVID-19. We give them the joy in their hearts even for one hour."

Buluran is a volunteer and she's been doing her show Radyo Pilipino for 15 years, every Sunday from 10 to 11 a.m. on 90.9 FM. Buluran believes Filipino radio's roots run deep here. But her conversations aren't confined to Calgary. Her radio reaches across borders, bringing her home country a little closer.

"Radyo Pilipino is also on live on Facebook. We have the internet where people in the Philippines are also listening and messaging me what kind of songs they want to sing. They also wish their family happy birthday, happy anniversary, so it's not only in the Philippines but it's what I've said. It's all over the world."

The show is almost exclusively in Tagalog and plays O.P.M. ("Original Pinoy Music"), pop music by Filipino musicians from several decades ago.

Across town in a suburban mall, Manila-born Renato Barnachea, 56, lowers the announcer chair for a photo shoot at Fairchild studios in Calgary's northeast.

He was a DJ at CJSW before Buluran and has been broadcasting to the Filipino community on both TV and radio for nearly 20 years. He left CJSW to create a new show, Radio Pinoy, assuming the nom de plume Juan Manila. He aspires to welcome an audience of new Canadians and strengthen support for his ever-growing community.

"I thought that there would be lots of Filipinos coming in Calgary so I thought we should help, have at least an hour here at Fairchild so they can hear not only us, they hear the Filipino language every Sunday."

The show mixes spoken English and Tagalog. Barnachea says this costs him a younger audience, but his hope is to message through the parents.

"So now if the parents are listening to me, the kids will slightly, you know, they won't be focusing but still, they will know that there is a Filipino radio program and that's important."

Gates Guarin, 29, is a Canadian-born broadcasting student at SAIT. For him, local Filipino radio isn't so much a "life line" as a "once in a lifetime." He appreciates the hard work of people like Buluran and Barnachea —  but says their shows just don't speak his language.

"They need to be more mainstream to reach out to a community of Filipinos that don't necessarily speak the language frequently in their household. Or may not have been brought up with these incredible Filipino traditions that we have," Guarin says.

"The only way you are going to be able to cater to an audience of our age is to be able to reach out and appeal to our interests, but also to keep that vibe of our culture and our history."

Guarin does see a double-edged sword in using the language but losing an audience. He suggests it may be the way we absorb any foreign language.

"It doesn't just apply to Tagalog, it's really any other language that isn't English or French, there's a bit of a stigma in our communities, when people are conversing in their local grocery store. I'm not saying this applies to the entire community, it does sound unfamiliar to a lot of people and I think we need to remove that stigma from a lot of the conversation."

Romeo Honorio is a fan of both the shows. He's 63 and likes to write books in his spare time. He immigrated from the Phillipines in his thirties and finds local Filipino radio fills a gap.

Guarin agrees with that but wants more.

"My parents did a phenomenal job trying to keep that culture and tradition in our household but once you start going to high school, university, you definitely kinda lose touch. I was part of the Filipinos student association at the U of C and that really reinvigorated my love of my culture. But it's something that I had to go out and seek myself."

Guarin's hope is that his generation of Filipino announcers, building on the foundation of earlier broadcasters, can create a new type of ethno-cultural programming — a post-digital fusion that highlights the best of Filipino and Canadian cultural arts.

Mike Symington has been with the CBC for three decades, most recently as a video producer.