Drone league allows racers to crash, and survive, at 160 km/h

It's high speed and low risk in the world of drone racing, as competitors wearing specialized goggles fly around the track from the comfort, and safety, of the sidelines.

Peering through goggles that offer a first-person view, competitors race around an indoor course 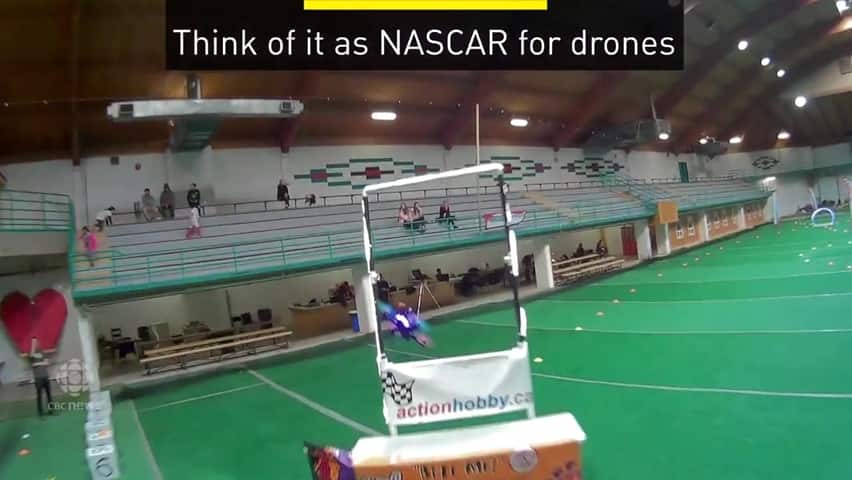 4 years ago
0:31
It's high speed and low risk in the world of drone racing, as competitors wearing specialized goggles fly around the track from the comfort, and safety, of the sidelines. 0:31

It was high speed and low risk as a handful of people gathered at the Chief Goodstoney Rodeo Centre west of Calgary on Sunday for the first Rocky Mountain Drone Racing League competition.

Wearing first-person goggles — which show video from a camera on the drone, allowing pilots to see where they're going from the safety of the sidelines — competitors manoeuvred their drones around the indoor course.

"You might be going 160 [km/hr] into a wall, and you crash, you break stuff, you have to fix it, but you're just standing right here," said Pablo Contreras, 20, who got into flying drones about a year ago after watching a YouTube video.

"Most people, when they think of a drone, they think of a camera platform for photography and that kind of thing, with features like GPS. This is just a completely different angle," he said.

"There's the thrill of racing and… with the goggles, it just puts you right in the driver's seat and it's such a thrill. Every time you land, you want more and more."

'It advances so fast'

Contreras said the drones move so fast, it wouldn't be possible to race without the first-person goggles.

Stacy Nephin started the Rocky Mountain Drone Racing league this year and calls it the wave of the future.

"The technology that they have here, next year, will not be leading technology," he said. "It advances so fast and their reflexes and their practice and training, shows."

He said racers build the drones themselves, mostly because they crash so often and need repair.

For Contreras, drone racing is just as much about community as it is about competition.

"We all share this passion and, you know, you crash, you win, whatever it may be, we just have a great time."

Contreras described the sport as "very" expensive," but added, "once you get flying, it's all worth it."