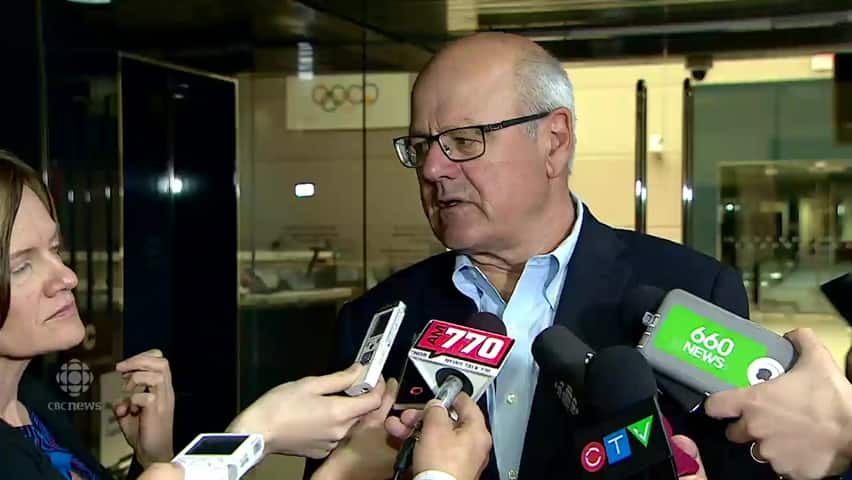 3 years ago
0:30
City council voted in favour of a possible land swap, which could see a new arena built just north of where the Saddledome now sits. 0:30

CalgaryNext has shuffled toward the end of — but not off — this mortal coil.

"To quote that great author Monty Python: I think it's still sleeping," Ken King said Monday, after city council stopped short of killing the proposal for a combined arena, stadium and fieldhouse just west of downtown.

The president of Calgary Sports and Entertainment Corporation (CSEC), which owns the Calgary Flames and Calgary Stampeders, kept up the 'Parrot Sketch' theme he's developed in talking about the ailing project.

While councillors didn't kill CalgaryNext outright, they did vote in support of an alternative proposal — sometimes referred to as "Plan B" — for a new arena and event centre just north of the existing Saddledome.

The idea remains in its infancy and there are few specifics in place.

The proposed site is in the community of Victoria Park, west of 5th Street between 12th and 14th Avenues S.E.

The land is currently a parking lot owned by the Calgary Stampede.

The city, which owns the Saddledome, is proposing a land swap of the old arena site and the new arena site.

The project does not include a stadium but there is ample space for an NHL-calibre arena and event centre, said Michael Brown, president of the city-owned Calgary Municipal Land Corporation (CMLC).

Council voted unanimously to have CMLC continue discussions with CSEC "based on the Victoria Park concept" and report back "as soon as possible."

Council also instructed city staff to work with CMLC to include the Victoria Park arena proposal in the area's larger redevelopment plan.

No nail in CalgaryNext coffin

Coun. Brian Pincott proposed an amendment to the vote that would have seen city staff instructed "to cease any further consideration of the CalgaryNext concept" but that failed by a 12-3 vote.

Deputy city manager Brad Stevens said during the council meeting the project is unfeasible, as it stands.

Since King unveiled the $890-million CalgaryNext proposal in August 2015, city officials have expressed a host of concerns about whether the public would benefit proportionately to the amount of money it is being asked to contribute.

CSEC had proposed kicking in $200 million of its own money and asked for a $200 million direct contribution from the city, in exchange for the inclusion of a fieldhouse that would be publicly accessible when the Stampeders weren't using the space.

CSEC also wanted to borrow $250 million — possibly from the city or from a private lender — and repay it with a ticket tax on future events at the complex.

The final $240 million was to come from a community revitalization levy (CRL) — a sort of loan that is to be paid back by anticipated growth in property-tax revenues resulting from the redevelopment.

A subsequent city report, however, estimated the total cost — including financing, related infrastructure and the clean-up of creosote contamination in the area's soil — would total closer to $1.8 billion, with taxpayers on the hook for most of the bill.

The CMLC is the group behind the East Village redevelopment, a project that has been funded by a CRL that applies in a broad area known as the Rivers District that includes the proposed arena site.

With East Village's redevelopment well underway, Brown said CMLC is now looking to focus on the Victoria Park component of the district.

Coun. Druh Farrell, who has been a staunch advocate of the use of a CRL to redevelop East Village, said the financing tool is not universally applicable and launching a second CRL for the West Village risked "cannibalizing" the first one.

"What makes CRLs fail — and there are lots of them that have failed — is diluting them," she said.

"I just continue to worry when we talk about CRLs somehow being a magic pot of money. It's a loan. It's a loan that gambles on the future of tax revenue, and we're in the middle of a downturn."

Brown said the Victoria Park arena project could make use of the existing CRL without changing its boundaries but the initial payback timeframe of 20 years may need to be extended.

New stadium 'on the back burner'

As for a new stadium for the Calgary Stampeders, King said the Victoria Park arena plan effectively puts that "on the back burner."

Overall, he said CSEC could live with Plan B, but said there's still a lot of work to be done.

He added it's important "to expedite the process" because the Calgary Flames are already "behind the clock" in their business plans as they relate to a new arena.

Even if a deal is reached, King noted it would still take years to build a new facility.

"We're enthusiastic to the extent that I think we're getting closer to being able to making some decisions ourselves," he said after council's decision Monday.

"If we can make a deal in Victoria Park, we will. And if we can't, then we will revisit whatever other options are available to us."