Ben Wright and Dian Volschenk have received dozens of business cards and emails in response to their networking strategy. 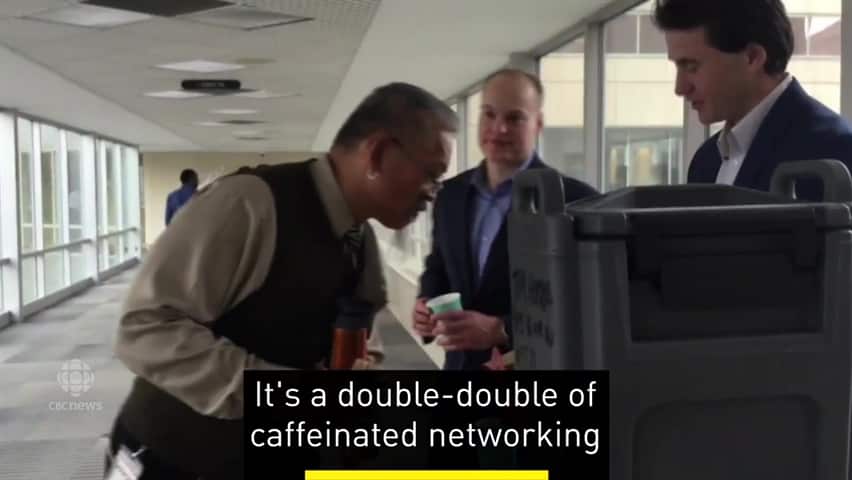 Graduates get creative with resumes

And the tight labour market in Calgary has prompted two recent university graduates to get extra creative on that front — by handing out their resumes all over the place via coffee cups.

Instead of going the typical route of applying for jobs online and handing out traditional resumes, the pair of University of Alberta graduates opted instead to pass out coffee and Timbits to other people. Printed on the sleeves of the coffee cups are Wright's and Volschenk's resumes.

"The two of us were at the library one night applying to jobs," Wright told the Calgary Eyeopener. "The application process these days is predominantly online so there's not much face-to-face communication, really."

"It was a late night and we were having coffee and we joked about putting our resumes on coffee cups," he continued. "Fairly quickly, it went from a joke to reality."

Volschenk said the two have received a warm reaction to their unusual self-marketing strategy.

"We have yet to actually meet someone who's not been really excited about it," he said. "We've actually been surprised by how popular the idea was."

How they do it

Volschenk and Wright bought a push cart with three shelves. In the mornings, they head into a Plus 15 or other busy area during the morning rush.

"We've got a couple signs on there that say, 'Free Coffee,'" explained Wright. "It also says, 'The only catch is you might end up hiring us.'"

Once someone stops, Wright or Volschenk will pour them a coffee and chat with them about what they're doing.

It's starting to pay off, Volschenk said. They've received dozens of business cards and emails in response to their networking strategy.

"It's not necessarily job offers," he said. "It's often just people reaching out and saying, 'Hey, I saw you guys.'"

"Ironically, the second day we were doing this, a gentleman took us out for coffee," Volschenk added.

In a labour market where many jobs receive hundreds of applications each, Wright said their method allows them to create more face-to-face interactions.

Both Wright and Volschenk are finance graduates — with Wright seeking a job within market research while Volschenk is looking for work within the energy sector. But both say they're not going to pigeonhole themselves into a specific sector, and are exploring options outside of Calgary and Canada as well.

"We're open to anything," Volschenk said.

​With files from the Calgary Eyeopener