The CEO of the Calgary Flames says the city's proposal for a three-way split on a new $555-million arena would have left the team paying "120 per cent of the project."

The CEO of the Calgary Flames says the city's proposal for a three-way split on a new $555-million arena would have left the team paying "120 per cent of the project."

Mayor Naheed Nenshi released details of the city's offer on Friday morning, after the Calgary Sports and Entertainment Corp. dropped a bombshell on Tuesday by saying it was no longer in arena talks with the city. 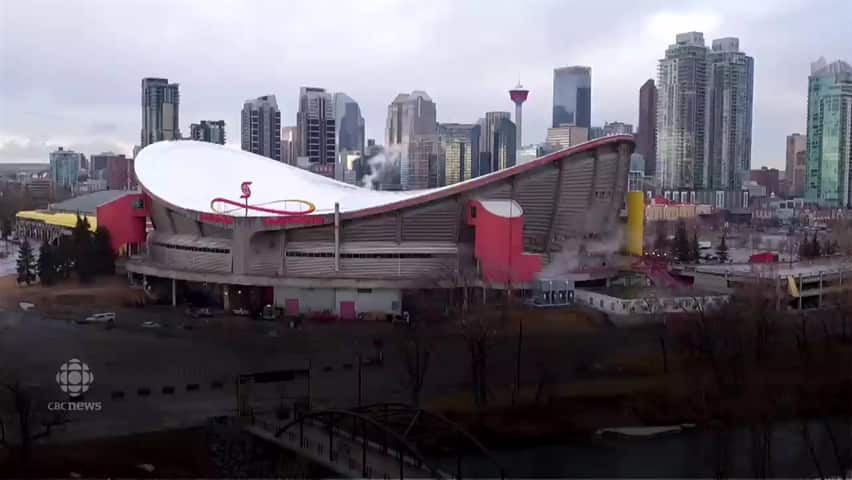 Inside the Flames arena deal: What was on offer and why it was shut down

Nenshi said the city offered to divide the cost of building a new arena — in the Victoria Park neighbourhood in the east end near the existing Saddledome — three ways with the Flames and with arena users through a "fee/ticket surcharge."

Ken King — CEO and president of the Calgary Sports and Entertainment Corp. that oversees the Calgary Flames, Stampeders, Hitmen and Roughnecks — criticized the city's offer at a news conference a few hours later.

King said the city's deal would have the team pay the city back for its portion of the cost through either property taxes, rent or lease, as well as the ticket surcharge — money that King said comes straight out of the Flames' revenue.

"This is no money grab," King said. "If it was, we'd be long gone. There's a lot of places to make a lot of money in sports other than here."

The Flames will release their proposal for the new arena next week, King said, but indicated the owners want the city to pay closer to half the direct cost.

The development favoured by the Flames — a proposed CalgaryNext complex on the west end of downtown that would have included a public fieldhouse and CFL stadium — was effectively killed by city council in favour of building a "Plan B" arena in Victoria Park.

Nenshi said earlier that the city was still willing to negotiate. He said the city's proposal to divide the cost three ways would have seen the Flames have full control of the arena and 100 per cent of all revenues, although the team would be asked to pay property taxes.

"The goal of building a new arena is not to win a Stanley Cup, it's not to invest in a better team on the ice," Nenshi said.

"The goal of building a new arena is to make more money.… It's important for us to remember that."

The city's contribution would include:

In addition to the $185 million in direct costs, the city would incur indirect costs related to infrastructure to support the arena and redevelopment in Victoria Park to the tune of $150 million, the city said.

That would exclude the cost of the utilities and the light-rail transit station, which would also be paid for by the city.

"This is, of course, an emotional issue for many people," Nenshi said. "I had a poster of Theo Fleury on my wall when I was a kid. I've been a Flames fan for a long time.

"Calgarians have told us, 'We're willing to make an investment. We're not willing to give away the farm,"' the mayor said.

King also denied once again that the Flames were playing politics ahead of the Oct. 16 municipal election, in a bid to put pressure on Nenshi and councillors who are running for re-election.

The Flames' owners have been gunning for a new arena in the city for years.

For CalgaryNext, the Flames' owners had offered $200 million of their money and proposed a $250-million loan to be repaid through a ticket surcharge, with taxpayers footing the rest of the bill.

Council disagreed with the CalgaryNext price tag, saying the project would cost approximately $1.3 billion when cleanup of creosote-soaked soil was included.

No mayors 'kicked out' for standing up to teams, author says

The author of a book about using public money to pay for sports venues says Calgary's proposal seems "reasonable" and fair to both the city and the Flames.

Neil deMause, the Brooklyn-based author of Field of Schemes, also said it's not in the Flames' best interest to use a new arena as a lightning rod during the municipal election.

"It doesn't have a terrific track record," said deMause.

"The number of city mayors who have been kicked out of office for not giving in to team demands remains zero at this point in recorded history … at least that I've been able to find."

The final result of the arena debate will be of interest to other cities and other mayors who are in negotiations with sports teams, he said.

"This is not just a Calgary issue and people across North America are really going to be watching to see how this plays out," deMause said.

"Because it really is one of the better examples of a city sort of standing up to a sports team and saying, 'Look, we're going to listen to you. We're going to work with you, but we're not going to roll over for you.'"