The castle in Scotland that gave Calgary its name is up for sale — and for a castle, it's a bloody steal.

Regal home with a colourful history off Scotland's west coast can be yours for $1.2 million 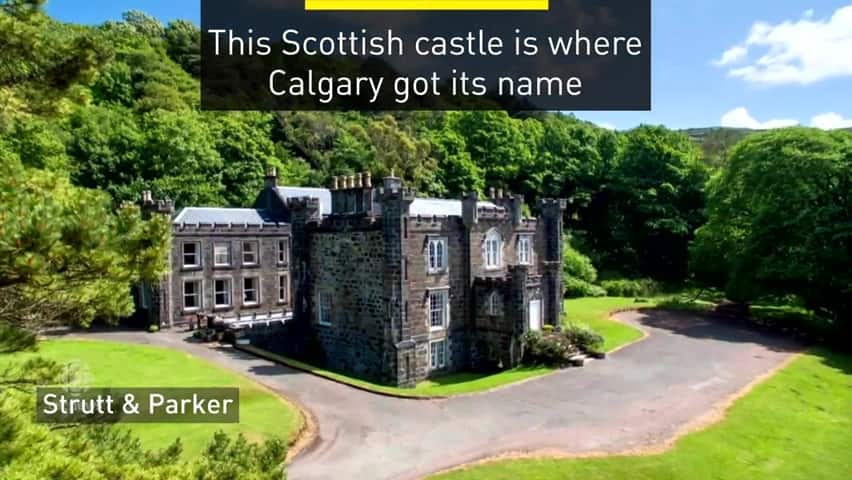 The castle in Scotland that gave Calgary its name is up for sale — and for a castle, it's a bloody steal.

Calgary Castle is an "exceptional" castle "overlooking the white sands of Mull's Calgary Bay," according to the listing provided by Edinburgh realtors Strutt and Parker.

The castle, originally built in the 1700s and renovated in the 19th century by merchant navy captain Alan MacAskill, features a crenellated parapet, angled turrets, gothic-style windows and plenty of period details.

"It's a fantastic place."

The eight-bedroom castle — plus a two-bedroom apartment — is located on 11.3 hectares on the Isle of Mull, part of the Inner Hebrides chain of islands off Scotland's west coast.

It's about 19 kilometres from the town of Tobermory, which has a whisky distillery, among other attractions.

"It would make an idyllic home, and while it offers the romanticism of island life, its proximity to Tobermory makes it a practical option, too," said Leslie.

There's a backstory to how that castle came to share its name with the southern Alberta city.

It seems that Colonel James Macleod — then commissioner of the North West Mounted Police, a precursor of the RCMP — was a guest at the castle in 1876.

He so enjoyed his stay — allegedly falling for the daughter of the house — that upon his return to Canada, he decided to rename Fort Brisebois at the confluence of the Bow and Elbow rivers. It became Fort Calgary.

In Gaelic, Calgary roughly translates to "beach of the meadow."

Leslie says interest has been "brisk" since the listing went up last Friday.

"We've been inundated with requests and Mull is not the easiest place to get to … but we've got a lot of viewings, which we're currently lining up. Somebody is seeing it this afternoon," he said.

Leslie said whoever buys the castle will need deep pockets, estimating it needs $350,000 to $700,000 in renovations, plus the ongoing costs associated with a large seaside property.

The Eyeopener also spoke with Olive Brown from the Mull Museum up the road from the property, and she had a bit of deflating news for prospective buyers.

"It is called Calgary House and it was nicknamed Calgary Castle," she said. "But it isn't a castle. The castle bit is just a nickname."

Where did the nickname come from?

"Somebody just gave it that nickname, you know. Somebody that perhaps thought the person who built it was a bit above themselves."

Stephen Hunt is a digital writer at the CBC in Calgary. Email: stephen.hunt@cbc.ca