Since COVID arrived earlier this year, Kandi Wyatt's career, along with the careers of other promising Calgary pros from gyms around the city, was stopped in its tracks. Her gym was forced to close and all competitions and travel were cancelled.

Kandi Wyatt throws neat combinations of quick punches into a heavy bag at the Calgary Boxing Club in Sunalta.

Away from the headlines and COVID updates, she's focused, training hard and waiting to see what the future holds. It's all she can do right now.

Since COVID arrived in Alberta earlier this year, her career, along with the careers of other promising Calgary pros from gyms around the city, was stopped in its tracks. Her gym was forced to close and all competitions and travel were cancelled.

It's been a tough year for the toughest of sports, especially for those grinding hard to make memorable careers.

After 15 years as an amateur and nearly six years as a pro, she now has an impressive record of 10 wins and one loss. But that momentum ground to a halt after her last fight in February. 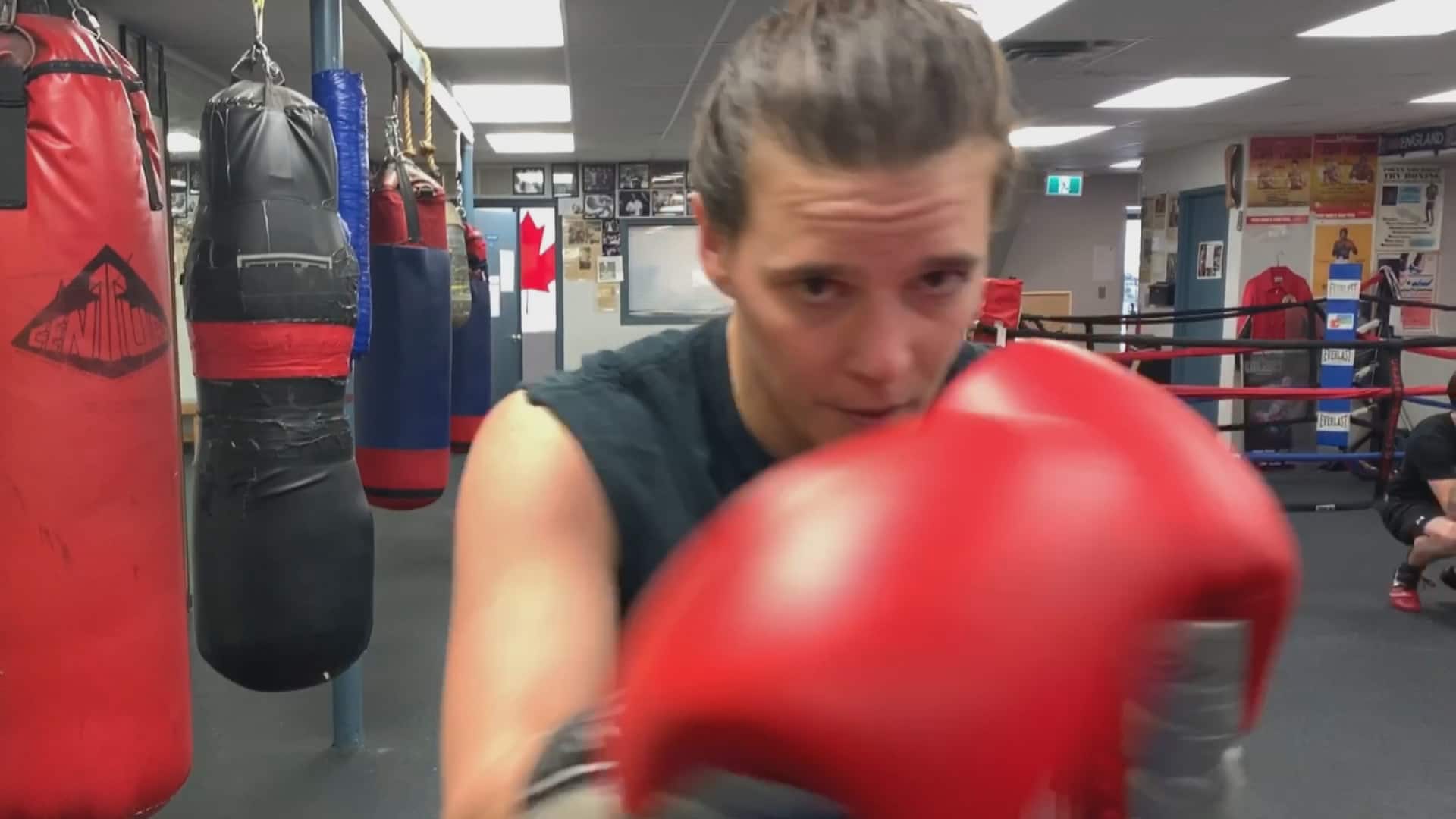 1 month agoVideo
3:11
Boxing has been one of the hardest hit sports in the pandemic. Find out what concerns this Calgary athlete the most when it comes to the future of the sport 3:11

"It was a forced layoff but I've been looking at the silver lining," said Wyatt.

"After two weeks, I'd wake up in the morning and I felt great, I wouldn't be sore or tired. Nothing ached and my body got time to rest and recover," she said.

With her gym closed, she spent spring running outdoors and finding ways to train at home, staying mentally and physically fit — an absolute must for any pro fighter.

"No fighter wants to sit idle, and it's definitely not ideal, but it's just what has to happen right now. You either deal with it or you don't," Wyatt said.

"I put the fun back into it. In a training camp, it's more purpose-driven, and with COVID I was able to take that intensity down a little bit. But now I'm champing at the bit," she said.

Fellow pro Devin Reti is also choosing to stay positive and philosophical about his own career grinding to a halt after what was a dream start to 2020.

Reti's last pro fight was on the same fight card as Wyatt's: a Dekada Boxing show at the Deerfoot Inn & Casino, where Reti won a version of the North American welterweight title.

Everything was going his way.

"We definitely had a lot of momentum and we had potential big fights coming up and lots of plans, but I had to remind myself it's not all about me. It is what it is and the world doesn't revolve around me," said Reti.

Reti found ways to train at home, stringing up a tennis ball as a makeshift double-end bag in his apartment and trying his best to stay sharp and mentally fit.

Like Wyatt, he's used the time to allow old injuries to heal.

"I've always been getting ready for fights so COVID gave me some space to attend to those injuries and space to pause and plan for the future," said Reti.

Hurting in a different way are local promoters who stage fights and events in Alberta.

In Calgary, ticket sales and door takings from live events are the primary source of revenue. Pay-per-view studio fights held without an audience, which are happening in the United States and the U.K., just aren't a possibility here.

"We've got athletes who are veterans at the tail end of their career and they may never get to fulfil their last remaining fights, and we have young people just starting their career," said Michael Short with Dekada Boxing, who has been in the fight game for more than four decades.

"What I'm looking for as a promoter is some directive from the city, from the province, to say when we can have an event, what has to happen, when we can host again," said Short.

A studio-style fight event happened in Quebec this month, but Short says his events are smaller, in a different market and dependent on crowds, which just aren't possible right now. It all makes for an uncertain future for Canadian promoters.

"Every event we employ around 100 people, we support local charities and some of our athletes have gone on to fight on some of the biggest stages in the world," said Short.

Even Alberta's amateur boxing shows are on hold for now, impacting the grassroots level of the sport.

There are concerns about how COVID could affect the next generation of boxers who were just starting out when the pandemic hit and may move on to other, more accessible, sports in boxing's absence.

They've been away from their gyms and coaches for months. Gyms are now opening again but with tight restrictions. Many are still staying away.

"The gyms are struggling a lot, there are a lot of new protocols, including at our gym, Bowmont Boxing, a non-profit society with volunteer coaches, and there are strict and costly precautions and waivers," said Short.

The impact on younger fighters and kids trying boxing for the first time is something fighters and coaches are concerned about, too.

Canadian boxing hall of famer and former Olympian Dale Brown trains Wyatt at the Calgary Boxing Club. He's seen a lot in boxing, but nothing like COVID.

"It's been crazy. It's all new stuff. We had to close for three months, we have no fights on the horizon and you've got to wonder about keeping your young kids engaged and wanting to come back," said Brown.

"Our younger athletes, parents aren't letting them come down because of COVID. But we've been safe, we take our precautions, make sure everything is sanitized," he said.

"There are fights happening on TV down in the States still. They just had Lomachenko versus Lopez, which is a big fight. I think kids are still interested and watching those fights, and I hope it makes them more eager to come back and train even harder," said Reti.

Wyatt says the gym has been busy again but the grassroots level of the sport needs help.

"We need to find a way to keep youth boxers engaged. With the senior fighters, we already have that level of discipline around training and fundamentals," Wyatt said.

"But to keep the grassroots program engaged right now when there are no fights, that's going to be our biggest hurdle to overcome. So we really need to figure out what we need to do to give young fighters something to work towards," Wyatt said.

As for what's next for Wyatt, she says her focus is on skill development and staying ready.

"If fight opportunities come up, we'll be ready to jump," she said.