School officials in Calgary will offer supports to students, family and staff following the deaths of 17-year-old twins Jordan and Evan Caldwell in an after-hours toboggan ride on an Olympic bobsled track.

School officials in Calgary will offer supports to students, family and staff following the deaths of 17-year-old twins Jordan and Evan Caldwell in an after-hours toboggan ride on an Olympic bobsled track.

"I think it's really important when a devastating tragedy such as this occurs for us to realize that there's a whole range of responses," said Calgary Board of Education area director Calvin Davies.

"We've put into place in our schools — both here at Westmount and at Ernest Manning — a very flexible support system so that we can respond to the range of emotions that take place."

Six other teenagers were injured in the crash. 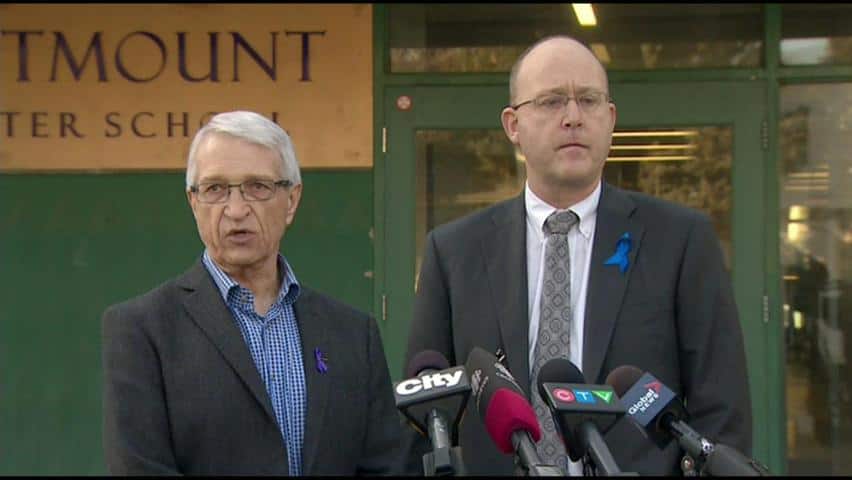 5 years agoVideo
11:54
Westmount Charter School Supt. Joe Frank and Calgary Board of Education area director Calvin Davies speak to reporters about support services being made available to students, staff, and families following the fatal tobogganing incident on a bobsled track at Canada Olympic Park in Calgary. 11:54

The youngest kids at the charter school, which includes about 500 students from Grade 5 to Grade 12, called Jordan "their rock star," the superintendent added.

Evan was also well known at Westmount before transferring to Ernest Manning to further his engineering studies, a field he planned to pursue at Queen's University.

'They had so much potential'

Kelsey Kaiser, 17, was a classmate of Evan's and said she'll remember "how good of a guy he was" to all his fellow students.

"I'll remember the morning announcements he did every morning and how welcoming he made everyone feel coming into the school," she said.

"You can't really think any hard things about him, because everyone makes mistakes," Kaiser added. "And you've just got to remember what he did for the community, and how good of a friend he was and how good of a kid he was to his family."

"They had so much potential," she said. "It's just horrible."

Frank said students are being encouraged to talk freely but stick to factual information rather than rumours, and to share their feelings.

"We have a table set up on three levels of the school for them to provide some kind of a tribute, and those tributes will be gathered in whatever form they are and provided to the family," he said.

Students are also being asked to refrain from judging the group of eight for their decision to enter Canada Olympic Park after hours and slide down the bobsled track on their own sleds.

"It's important for us to remember that the students involved in this event, they're teenagers," Frank said. "They make some decisions about the kind of activities that they want to get involved in. Sometimes it would be a bad decision, which can lead to a tragic ending."

"We need to have our students, as much as possible, think about how that can happen to anybody," he added.

"It's not about judging what decisions this group of students made."

A funeral for the twins will be held on Thursday, Feb. 11 at 1 p.m. at the Centre Street Church.