Where is the wayfinding? Advocates say Calgary pathways lack direction

Calgary boasts one of the most extensive pathway systems in North America with little signs to give users direction.

Calgary boasts one of the most extensive pathway systems in North America — the city itself held a news conference this summer to celebrate a milestone: 1,000 kilometres of paved pathways.

But some advocates wonder what good is paving the way without giving those using the network directions?

Well, cyclist Jeff Binks says it's like having a Deerfoot Trail without signs.

"I think it's a little silly that we're asking cyclists to make decisions on where they're going in our city without any signs to let them know how to do it and how to do it safely," Binks said.

The city says this summer more people are discovering the city by bike, on foot, on rollerblades or skates, and on scooters.

It's become a trend during the pandemic. People who haven't used a bike before, or who let their rides gather dust in the shed for years, are picking up old hobbies.

And Calgary is a great place to do it. The Bow River pathway is a beautiful ride, with many stops along the way. It connects to the city's cycle track network at several points, opening up weekend warriors to shopping districts like 17th Avenue, Inglewood and Kensington without having to spend much or any time on the road with cars.

But that's if you already know the way.

Cycle west along the Bow River pathway, as Binks demonstrated on a beautiful Saturday morning, and nearly all the connections branching off that path are nondescript intersections that only a seasoned cyclist or someone with a map would know.

"All it would take is a couple of signs to let people know," Binks said.

Even those who have cycled the pathway before might mix up which left-hand turn will connect directly to the cycle track network.

Binks points out the Fifth Street cycle track doesn't end and start at the river pathway. Instead, it's a two-block trek before the protected lane begins. Even so, it's a great connector to get riders from the river, under the CP Rail tracks and on to 17th Avenue.

Yesterday, I was nearly hit when a driver ran the 4-way stop on 2 Ave at 5 St SW in Eau Claire. I was so shaken I had to stop my bike and regroup. Can we have some design changes to make the transition from the 5 St cycle track to the Bow River pathway safer? <a href="https://twitter.com/hashtag/yycbike?src=hash&amp;ref_src=twsrc%5Etfw">#yycbike</a>

Coun. Druh Farrell says it's something the city needs to be better at.

Last summer, she advocated for changes to how the city approaches pathway detours — and this summer, pedestrian and bike detour signs with maps have popped up all over the city.

She's hoping to meet with the city's transportation department to advocate for continued improvement in detours and wayfinding.

Farrell would like to see the city add wayfinding points or an updated app to connect those on pathways to shopping districts.

"There are lots of opportunities there linking different parts of the city for tourism for people who are commuting for people who are enjoying their day on the bike," Farrell said. "I think we need to look at providing information about the network and treating it like a network. Not an afterthought."

Wayfinding on the way

In January, councillors approved the guiding principles for the 5A network for walking and wheeling infrastructure in Calgary, which is the latest update to the city's old pathway and bikeway plans.

If you're wondering, 5A means: Always Available for All Ages & Abilities.

And one of the principles of this new plan is wayfinding.

Jennifer Black is a senior transportation planner with the City of Calgary. She says improvements are needed to make the network more seamless for all users.

"We do understand that wayfinding is something we need to work on," she said.

The city's last paper map was published in 2017, and a new map is planned for early 2021. The map can be downloaded and printed from the city's website.

The city launched the Calgary Pathways & Bikeways app in 2012 for Apple devices and 2017 on Android.

The app displays the city's digital map on the website that users can zoom in and out of to find up-to-date pathway detour information as well as look at the pathway network.

Black says improvements are coming, but things like wayfinding will take time to implement and make relevant for all users.

Work will be done in phases

"We are certainly looking at rolling this work out in phases," she said. "So step one is to get that pathway and bikeway map down."

Black said the city's still in the exploration phase, looking into signage and the possibility of an app. But there's more work to be done before signs go up. In the meantime, the city does have an online map that's live and updated as changes to the network happen.

Binks says the city may be overcomplicating things and should be looking at the city's network through the eyes of a tourist or someone new to Calgary.

"I think it comes back to the old saying just keep it simple," Binks said. "The simplest thing is signs. Signs are quick, signs are easy and signs are cheap and signs don't require people to download an app on their cell phones …  signs don't judge who you are."

He says the problem should be resolved in a matter of weeks, not years — there's no reason to reinvent the wheel. 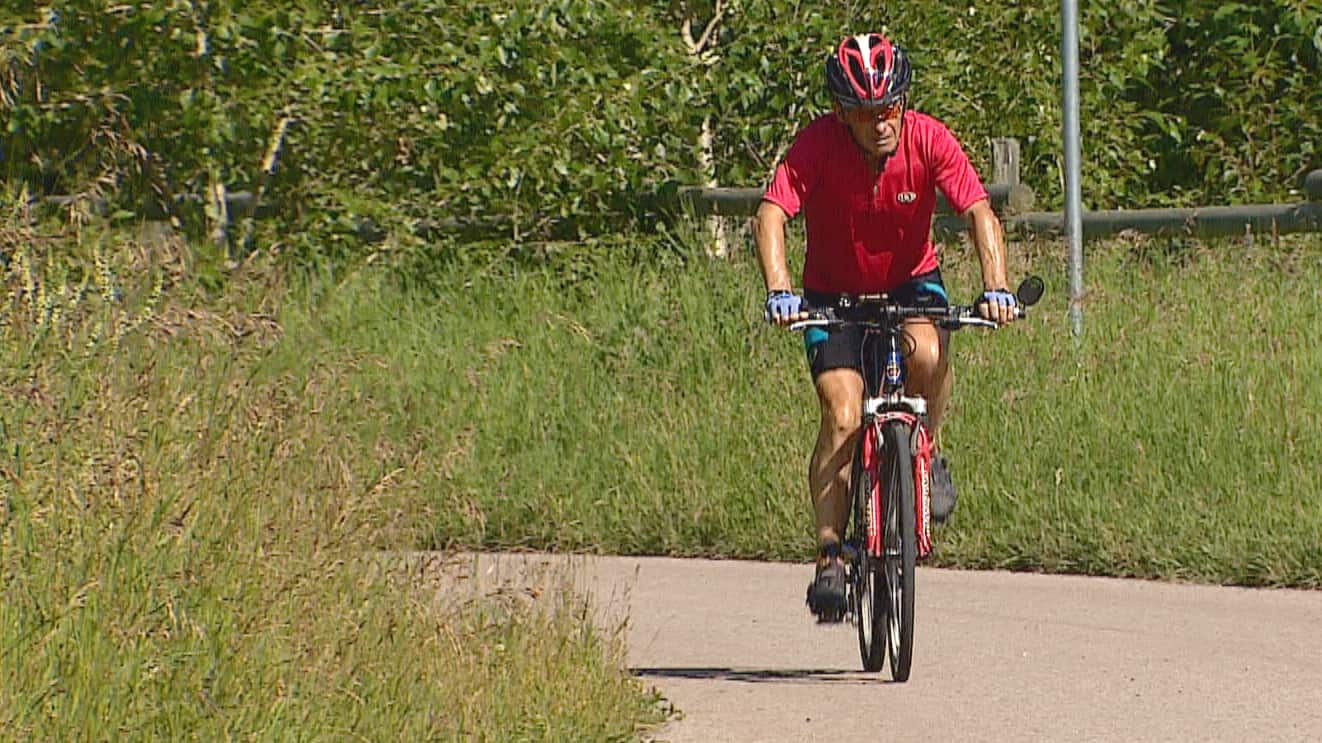 3 months ago
4:37
If you've ever played Pac-Man, you'll understand it's a difficult task, but David Schamber was up to the quest. He took CBC along for a ride just days before yycpathways added the latest city update to their map for him to tackle. 4:37

Helen Pike joined CBC Calgary as a reporter in 2018 after spending four years working as a print journalist focusing on urban issues and municipal affairs. You can find her on Twitter @helenipike.