Two people were hospitalized in an incident involving Calgary's first reported use of the drug bath salts. 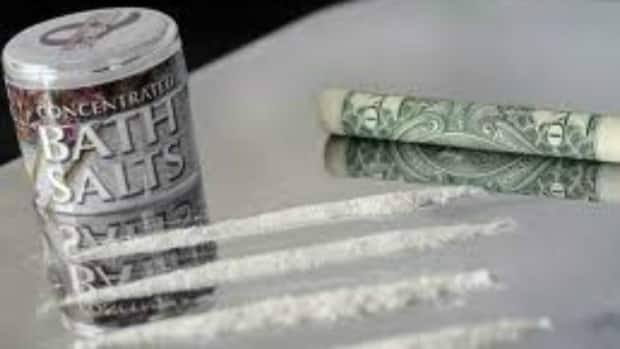 8 years agoVideo
1:45
Calgary police are worried about the use of bath salts after an incident this weekend. 1:45

Two people were hospitalized in an incident involving Calgary's first reported use of the drug bath salts.

The parents of a 21-year-old man called police to their Bridlewood home on Saturday morning.

They said their son had taken the drug and was having what they described as a psychotic episode and that they were concerned for his safety.

Duty Insp. Paul Stacey said police underestimated their response and had to call for backup.

MDPV, or methylenedioxypyrovalerone, is a synthetic cathinone. Cathinone occurs naturally in the East African evergreen shrub known as khat. MDPV acts as a stimulant and can have similar effects as amphetamines.

Although MDPV and other cathinones have been used medically as an appetite-suppressant, their appearance as recreational drugs is fairly new. The salt- or sugar-like clumps are marketed online or in retail outlets as "plant food" or "bath salts" to get around drug-control laws.

Source: The European Monitoring Centre for Drugs and Drug Addiction

"We were a little surprised by this because this fella that we encountered, he actually turned out to be extremely powerful for his size and completely impervious to any sort of pain compliance techniques we might have been able to use on him," said Stacey.

When more officers arrived they were able to wrestle him to the ground and hand him over to EMS for care.

He was taken to Rockyview General Hospital and is expected to make a full recovery.

One of the first responding officers was also taken to hospital with an injury to her hand but has been released.

The long-lasting street drug is comparable to a mix of cocaine and amphetamine and is known to cause hallucinations, paranoia and violent behaviour. The key ingredient in the drug is called methylenedioxypyrovalerone (MDPV).

Stacey called the incident a learning experience for police.

"It's an eyeopener for us. We’ve all seen what happened down in the States. At this point it's a legal drug but extremely, extremely dangerous."

Police to consider change in response

He said it was only a matter of time before the drug landed in Calgary.

"We'd be naive to think it wouldn't show up here," said Stacey.

"We're disappointed, obviously, that it has, but we're hoping that we don't get a big emerging trend that comes here."

Police held an internal debriefing Sunday and will now consider dispatching more officers to respond when the drug is believed to be involved, said Stacey.