A Calgary man is on Cloud 9 after recently putting the finishing touches on an incredibly authentic flight simulator in his basement, but he's not done yet. 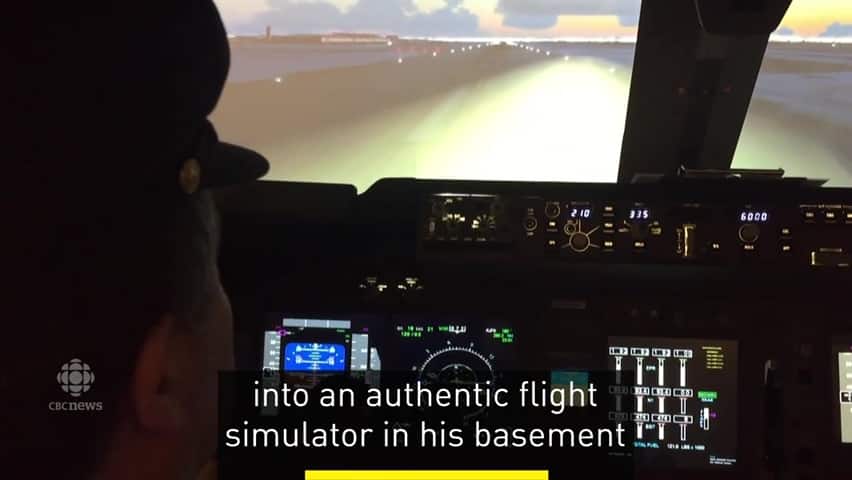 4 years agoVideo
0:56
A Calgary man is on Cloud 9 after recently putting the finishing touches on an incredibly authentic flight simulator in his basement, but he's not done yet. 0:56

A Calgary man is on Cloud 9 after recently putting the finishing touches on an incredibly authentic flight simulator in his basement, but he's not done yet.

"I have loved airplanes since I was a little kid. They just fascinated me. In particular, I love the Boeing 747. I don't know whether it's because of the hump on the top or because it was the first plane I was on when I came to Canada in 1983."

Flight simulation has been a passion of Governali's for decades, but a few years back he decided to take it to the next level.

"You start with just a monitor and a little computer. That was back in 1995," he explained.

That was five years ago.

"I am fortunate that not only do I own a computer store, so computers are a no-brainer for me, but second, I am pretty good at building things," the McKenzie Towne resident said.

With roughly $25,000 and thousands of hours spent on the project, Governali now can take off anytime he wants.

"The part that I enjoy the most is building it," he said.

Governali's simulator is connected to the air traffic control systems of major airports in real time, he says.

"Let's say I tune it to Montreal. If it's raining or snowing right now in Montreal, my simulator will rain and snow, same temperature, same winds."

Governali says while his current simulator is pretty much finished, aside from minor tweaks, his foray into flight simulators is a journey, not a destination.

"Passion is number one," he said of his motivation.

"If you like something, you want to do the best that you can. Eventually I got tired of flying a desk. To make it more interesting and challenging, you have no choice but to go to the next step."

With files from Falice Chin