It's been nearly 60 years since Canada's iconic Avro Arrow supersonic interceptor jet was cancelled and scrapped. But for years, a group of volunteers in Calgary has been attempting to build a replica that could one day take flight. 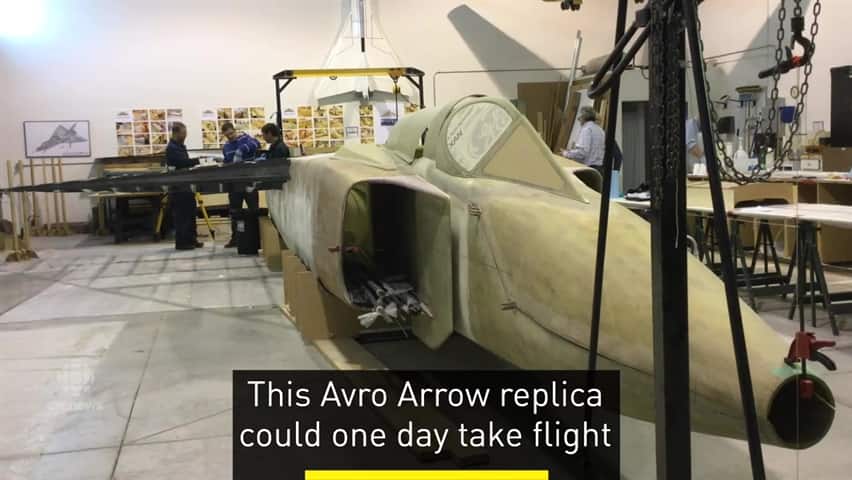 Replica could take to the skies after decades of work

This story was originally posted on April 2. Anyone interested in the project is invited to an open house at the hangar at noon Monday.

And though the jets never entered operational service, the Arrow's legacy continues to inspire flight enthusiasts across the country.

Over the years, people have built replicas for display purposes, but a group of volunteers in Calgary have much higher hopes for their model — they're building a 0.6-scale replica of the famous jet that could one day take flight.

"The Arrow was a unique achievement in technology," said Paul Gies, the president of the A.V. Roe Aviation Museum Association.

"It was unfortunate that that much technology and achievement was lost."

Designed by A.V. Roe Canada in Malton, Ont., the Arrow was built to intercept Soviet bombers that might have entered North American airspace over the North Pole during the Cold War.

Hailed for the advanced technology it represented, the program was halted suddenly on Feb. 20, 1959 by Conservative Prime Minister John Diefenbaker.

The program, supported by his Liberal predecessor, Louis St. Laurent, was expected to have a final cost of $1 billion and was deemed too expensive. All existing prototypes were destroyed.

"It's almost legendary because of the way the program was terminated, but also what it did," said Gies. "At the time it was built, it was the fastest, highest-flying aircraft. It was a program that put Canada on the forefront of aviation development."

At a small hangar at Calgary's Springbank Airport, a handful of volunteers gather each Tuesday for build night.

They've been meeting over the last 20 years, and spent the first eight years in research and development.

Building a model of the plane will be difficult enough, but the group is also ensuring that the aircraft — called the Arrow II — is built to conform to the amateur build regulations of Canada, making it an even more painstaking process.

"There are some departures [from the original plane] to make it compatible with how we have to fly it," Gies said. "It will operate under a special certificate of airworthiness when we do fly it."

Upstairs, Jason Palset is hard at work flying the Arrow through a simulator.

Seated in a makeshift cockpit in front of three large screens, Palset performs some aerobatics to demonstrate the capabilities of the Arrow, and then deftly lands the plane on the runway before taking off again.

"It's definitely a great machine," said Palset, as he banks sharply to the left over a simulated landscape of southern Alberta.

"Every time I try something in the simulator and prove it, it comes out with the result I'm looking for," he adds.

It's a labour of love for Palset, Gies and everyone else who works on the plane. They hope to flight test it within the next five to 10 years.

Gies says it's all about preserving the legacy of the Arrow. In addition to building the Arrow II, the group also operates the Avro Museum and has built smaller models of the plane.