Jesse Ramos is one of nearly 80,000 Albertans who used a food bank this year and, like an especially high proportion of food bank clients in this province, he has a job.

'I really have to make things stretch,' says father of teenaged boys faced with choice between rent and food 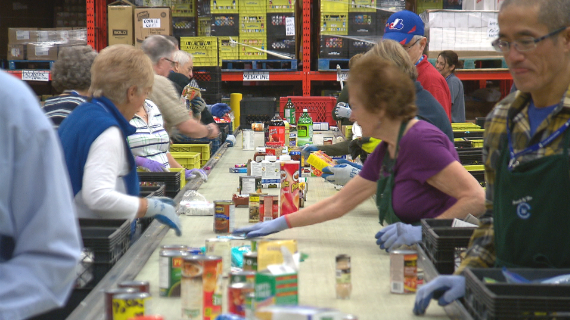 Jesse Ramos is one of nearly 80,000 Albertans who used a food bank this year and, like an especially high proportion of food bank clients in this province, he has a job.

"I'm a single dad to great teenaged boys and, well, teenagers eat a lot of food, so I really have to make things stretch," he said.

"I'm working six days a week and I'm still only making part-time hours — it's still not even full time — and it's minimum wage. It's pretty tough."

After seven months of unemployment, Ramos said he's grateful for the work he has now, but 70 per cent of his income goes to rent and utilities, leaving little left over for food.

"Every time I do go for some groceries with an extra 50 bucks once in a while, I look at toilet paper and think: It's that or ground beef. What do I do?" he said.

And he knows he's far from alone when he visits the Calgary Food Bank.

"The past four months, I've seen the lineups double," he said. "I've seen the rations that go out become a little bit more scarce."

More than 30% of clients have jobs or EI income

Some 79,293 people used food banks in Alberta in 2016, according to Food Banks Canada's annual Hungercount report.

Food bank use has also risen across Canada but not to the same degree, although national per-capita usage still exceeds Alberta's.

"More than 30 per cent of the households who have accessed foods are either working or were recently employed."

Nationally, by contrast, only about 15 per cent of food bank users have income from a job or Employment Insurance benefits.

Click on this interactive graph to see food bank users' income sources in Alberta and across Canada:

James McAra, CEO of the Calgary Food Bank, said a "whole bunch of things came together at the same time" in Alberta to drive the current situation.

He said demand grew by 41 per cent after the economic crisis of 2008 and then never really abated before being amplified by natural disasters like the flooding of 2013 and the Fort McMurray wildfire in May, which brought thousands of evacuees to Calgary.

At the same time, McAra said the continuing influx of international and inter-provincial migrants to Alberta drove housing prices up, making affording both rent and food a challenge for many employed people.

The result has been growing food bank demand — a fact he said is highlighted by various reports every year, but rarely met with any substantive policy changes to help fix the problem.

"It is unacceptable that we continue to expect … to feed our way out of this problem. You cannot do that. We need significant changes," McAra said.

"Food banks are fabulous at actually making sure that people don't fall further down into the poverty trap, into crisis that they don't want to have. But there's only so long food banks can do that."

This graph depicts food bank users in Alberta in terms of absolute numbers and percentage of the population since 2008:

"So we know that food bank use in the province is even higher than is reflected in the report."

Ramos said there's no doubt in his mind there is an "incredible need" among many people in the province.

"We really need some help here. We do."

With files from Carolyn Dunn