Here's how much money Calgary police actually get from the province

For more than a week now, the Government of Alberta and the City of Calgary have been telling two different stories about how much money the province is providing — or isn't providing — to Calgary police.

Mayor and finance minister telling 2 different stories. Who's right? We break it down.

For more than a week now, the Government of Alberta and the City of Calgary have been telling two different stories about how much money the province is providing — or isn't providing — to Calgary police.

We heard Mayor Naheed Nenshi say he was surprised that "the biggest cut was to the police" when it came to the province's latest budget and its impact on the city's own operating budget.

We then heard Justice Minister Doug Schweitzer respond by calling Nenshi "Trudeau's mayor" and saying he's "out to lunch" on this file. In fact, Schweitzer said, "our budget didn't reduce police grants by one dollar."

The answer, if you look at the actual financial documents behind all the rhetoric, is that both politicians are technically correct. But they're choosing their words carefully.

How is that possible?

The issue is that money flows from the province to Calgary police in more forms than grants alone. The Alberta government also shares fine revenue collected from speeding tickets and other offences with Calgary and other municipalities for the purpose of police funding. But it's now planning to claw back some of that of money, and keep a larger share of the fines for itself.

And even when it comes to the provincial grants, those dollars are subject to inflationary pressures when they are spent by police. But the flow of cash hasn't increased to match.

We'll break down the numbers in a moment. But first it's important to clarify one thing.

In all the political back and forth over this issue, some incorrect information has been circulated on social media.

In response to a criticism from the Opposition over the budget's impact on Calgary police, the premier's press secretary recently tweeted: "LOLZ. Seriously though. The City of Calgary funds @CalgaryPolice, not the Government of Alberta."

While the bulk of the funding for Calgary police comes from municipal tax dollars, the province also provides funding through the aforementioned grants and revenues from fines and penalties.

Those fines and penalties are generated, in large part, by enforcement done by Calgary police officers, but the money goes to the province. (Ever get a speeding ticket? Notice how you have to make the cheque out to "The Government of Alberta?") The province then funnels some of that money back to municipalities to pay for policing.

Last year, the Calgary Police Service received $56 million as its share of fines and penalties.

The service also received $19.9 million from the Municipal Policing Assistance Grant, a provincial program that provides funding at a rate of $16 per resident.

Calgary police received another $12.3 million from the Police Officer Grant (also known as the "new officers" grant), a separate program that provides $100,000 in ongoing funding for the 300 additional officers the Alberta government provided to municipalities across the province from 2008 to 2011. (Calgary received 123 of those officers.)

Here's how all that compares with the other sources of funding for police:

It should be noted that the "other" category in the above chart includes some smaller sources of provincial funding, as well. According to the Calgary Police Commission, the province provided roughly $800,000 for police crisis teams and victim supports, and "some funding" from cannabis tax revenue is also mixed in there. (A precise figure wasn't available.)

The commission notes, however, that Calgary police have spent $6.2 million on training and equipment in preparation for the legalization of cannabis and expects ongoing spending of roughly $1 million per year. They're still waiting for more "clarity" on how all three levels of government will fund this aspect of policing.

Cannabis issues aside, it's clear that the three biggest chunks of funding for Calgary police, in order, are: municipal taxes, fines and penalties, and provincial grants.

The city is obviously responsible for its own taxes. So let's look at those last two chunks, which are controlled by the province.

Right now, the Alberta government takes 26.7 per cent of fine revenue and shares the rest with municipalities. But, according to the the provincial budget, it plans to increase its own share to 40 per cent. That will mean about $37 million more per year flowing to provincial coffers instead of municipal coffers, starting in the 2020-21 fiscal year.

Calgary estimates it will lose $10 million per year as a result of the change.

On top of that, the budget also indicated that the province plans to start charging municipalities for biological lab work like forensic DNA analysis, which Calgary police expect will cost them another $2 million per year.

The $12-million total hit is equivalent to about 130 full-time positions, according to police Chief Mark Neufeld.

Asked recently in the legislature about the impact all this would have on crime in Calgary, Schweitzer deflected the question and claimed the province is actually providing "more money for policing."

How can that be true, given everything we've seen so far?

In part, it can be attributed to the fact that "policing" in Calgary also includes work done by the Alberta Law Enforcement Response Teams (ALERT), an umbrella agency that targets organized and serious crime. The province boosted ALERT funding by $3 million this fiscal year, and has committed to a total increase of $50 million over four years.

With respect to the Calgary Police Service budget, specifically, you have to take a particular view of what "more money" means.

Strictly speaking, in nominal dollars, the province is indeed providing more money to Calgary for policing through one of its two major grants.

The Municipal Policing Assistance Grant, by its $16-per-resident nature, grows with population. The city expects that will mean the $19.9 million it received last year will grow to $20.4 million this year, due to Calgary's population growth. But it deems the level of funding to be "unchanged," from a practical point of view.

And that rate of $16 per person has remained "unchanged since 2005," according to a spokesperson with Alberta Justice. The "new officers" grant, meanwhile, has remained the same — $100,000 per officer — since the program's inception in 2008.

All the while, the cost of policing in real-dollar terms — through annual salary increases, increasing costs for equipment and supplies, and other inflationary pressures — has grown.

The Calgary Police Commission estimates the actual "purchasing power" of $16 has dropped by nearly half since 1999. And the original $100,000 in "new officer" funding is equivalent to about $80,000 in today's dollars.

Meanwhile, Calgary police have already cut back on training, technology and the size of their vehicle fleet due to earlier cuts in the city's own budget.

"Over the last couple of years, we've found about $20 million in efficiencies," Neufeld said last month.

"We're an efficient organization, the way it is now."

Schweitzer says it's up to the city to find its own efficiencies and figure out how to provide police with the funding they need — and he's told Calgary's police chief as much.

"I've talked to Chief Neufeld and I've encouraged him to talk to his mayor to get Calgary's fiscal house in order," he said in the legislature last week, in response to a question from the Opposition.

"We want to see Calgary get its fiscal house in order. I'm tired of paying more taxes in Calgary." 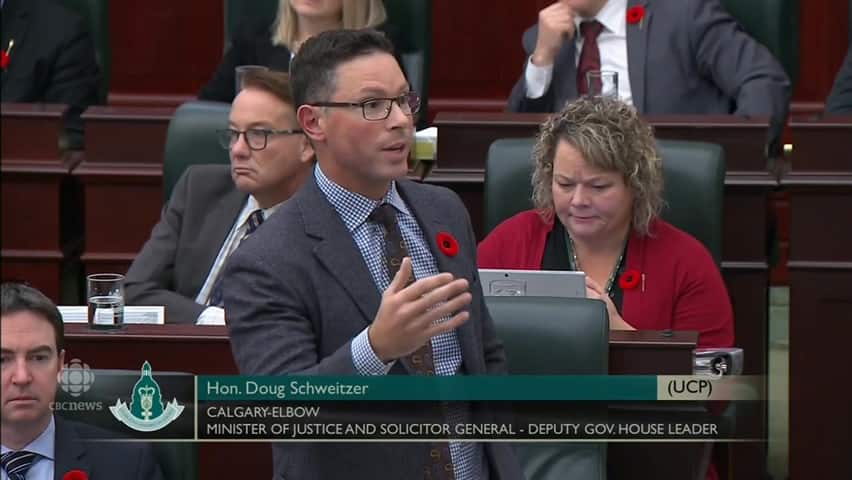 12 months ago
0:57
Justice Minister Doug Schweitzer responds to a question from Calgary-McCall MLA Irfan Sabir about provincial funding for police. 0:57

Calgary-McCall NDP MLA Irfan Sabir, however, said during that same exchange that the changes in the provincial budget could actually force Calgary to raise property taxes in order to make up the $12-million shortfall highlighted by the police chief.

"Does the minister want the City of Calgary to hike property taxes to backfill his raiding of the police budget?" said Sabir, who represents an area of the city that has seen a surge in shootings this year.

"Or is he OK with having 130 fewer officers patrol the streets of Calgary during a crime wave?"

Decisions about actual policing levels will be made later this month, when Calgary city council debates and votes on its own budget.

Council is set to meet on Tuesday next week for a preliminary budget discussion and has set five days aside in the final week of November for full budget deliberations.