This Valentine's Day Bret (The Hitman) Hart is hoping men across Calgary will give themselves some love — and get screened for prostate cancer.

'The truth is you just need to get your bloodwork done, it's really such a simple thing,' Hart said 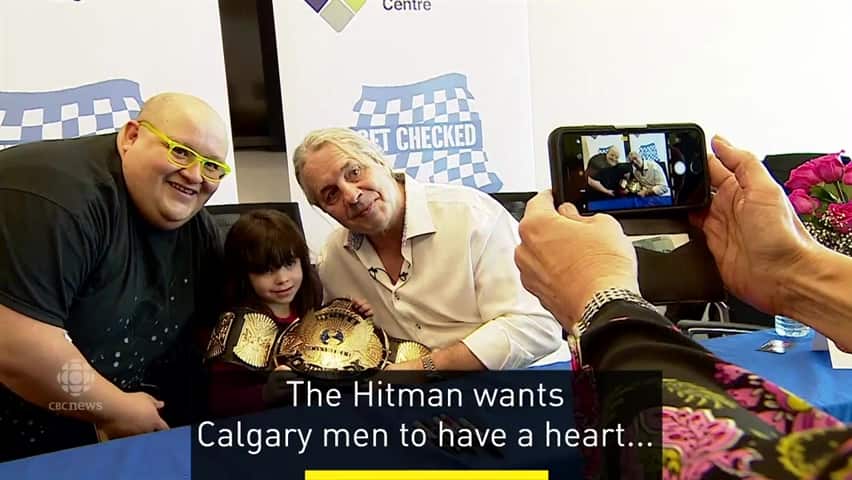 Bret Hart on why PSAs are so important

This Valentine's Day Bret (The Hitman) Hart is hoping men across Calgary will give themselves some love — and get screened for prostate cancer.

The former professional wrestling champion has been an advocate for men's health since being diagnosed with prostate cancer in 2015.

Today, Hart is cancer-free because of early screening, but his older brother Smith Hart was not so lucky.

Smith Hart died in 2017 just six months after being diagnosed with Stage 4 prostate cancer, which spread to his hip and femur.

"He was just a guy who never got checked, never thought it was important. He thought he was always healthy, always felt pretty good," Hart said Tuesday at the third annual Bret Hart Men's Health Day held at the Prostate Cancer Centre at Rockyview General Hospital.

"By the time he checked, the cancer was too far gone. That mistake and not getting checked cost him his life."

Prostate cancer is the most commonly diagnosed non-skin cancer in men and it just takes a simple blood test to screen for it.

"It's not about the finger, [the finger check] that seems to scare a lot of men off. The truth is you just need to get your bloodwork done, it's really such a simple thing," Hart said.

The PSA, or prostate-specific antigen, test measures inflammation. Screening aims to find cancer before symptoms appear and reduce the chance of death with early treatment.

Doctors recommend men first get tested when they hit 40, so a baseline is established, then another at 45 and then 50, after which men are urged to be screened yearly.

Darren Thompson was one of many who came on Tuesday for screening. He said he didn't mind the discomfort for the peace of mind the test would bring.

"I hate needles but I love my family and I love my friends, so it is the key to a little bit of discomfort for the piece of mind that you're safe," Thomson said.