Kochney decided to post an appeal for help on a Facebook page for Bowness moms, and recruited a small army of Bownesians — along with her city councillor, Ward Sutherland — to get the street cleared after three weeks dealing with snow.

More than three weeks after a snowstorm wreaked havoc on Calgary roads, the city is still trying to catch up on calls to clear residential streets — but one woman called on her community for help instead.

Terri Kochney, a resident of the northwest community of Bowness, lives on a crescent that she says has been covered in snow since the December storm that buried parts of the city.

And when Kochney spotted her elderly neighbour, Milada Rysan, crying and stuck on the street Thursday night, she had seen enough.

"[Rysan] has a very low-riding car, she's a senior and she just was exhausted from all the effort. She goes out, she shovels and then the garbage trucks come by and they chew it all up," Kochney said. 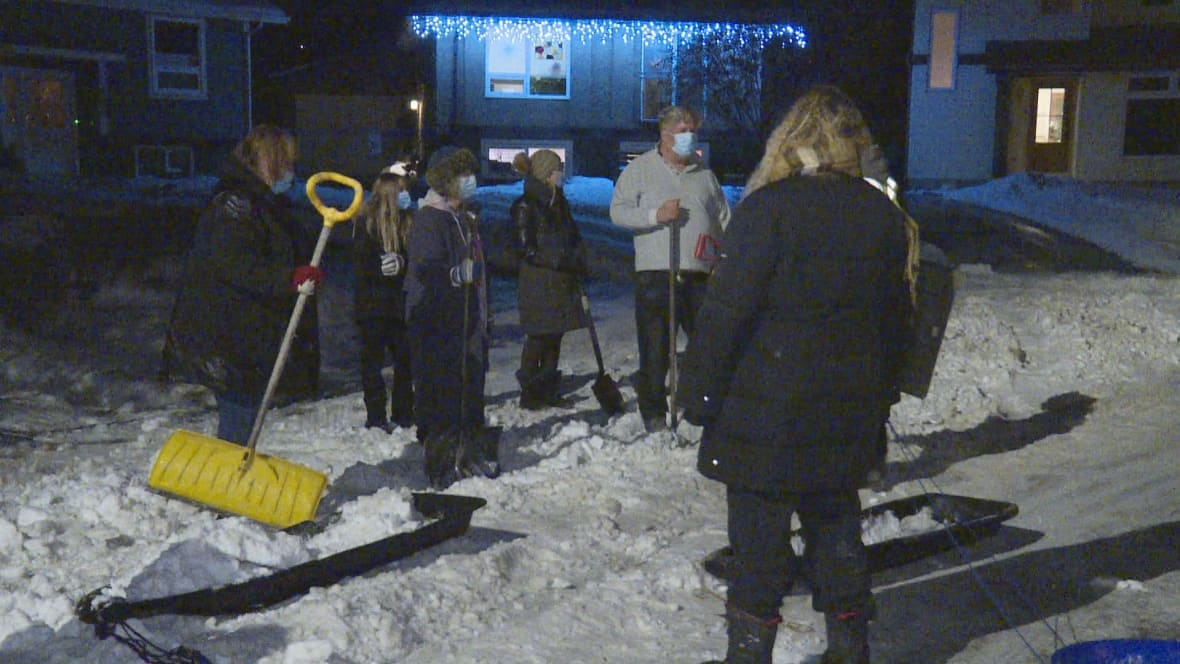 1 month ago
1:08
A Facebook page for Bowness moms recruited a small army of Bownesians — along with her city councillor — to get the street cleared after three weeks dealing with snow. 1:08

Kochney decided to post an appeal for help on a Facebook page for Bowness moms, and accidentally recruited about a dozen Bownesians — along with her city councillor, Ward Sutherland — to get the street finally cleared.

"I jumped on there in the hopes that somebody would come with a little baby bobcat, or maybe even a flamethrower," she said.

Two feet and a heartbeat

Residents on the crescent in Bowness have tried to get the street under control in an ongoing battle, Kochney said.

But in the time since the storm, the snow has hardened into icy drifts almost a foot tall.

While Kochney has seen city plows come through the street about six times, the walls of snow they push to the curbs have buried cars, and proved extremely difficult for the neighbourhood to tackle.

And when she saw Rysan in tears, Kochney initially called the city but realized that its response would likely not be fast or thorough enough.

Its policy does not include plowing snowy residential roads down to bare pavement, or hauling it from residential areas.

But shortly after Kochney resorted to posting on the Facebook message, volunteers descended upon the neighbourhood with shovels — including Wendy Peters, who no longer lives in the community but made the trek when she heard a senior was in trouble.

"Figured I could lend a hand; I've got two feet and a heartbeat," Peters said. "It's our seniors. We have to take care of them."

For her part, the community's response took Milada Rysan aback.

"It's very surprising and incredible, after giving up on, you know, getting rid of the snow any other way," she said.

What Calgarians are all about

Another Calgary resident who went to the neighbourhood to help was Coun. Ward Sutherland.

When CBC News contacted Sutherland to let him know the group was shovelling, he dropped by — and called in city crews to help clear the snow piles.

"This is what Calgarians are about," he said. "This is a great example of Calgarians getting together ... and taking care of their neighbours."

Last week, Sutherland, alongside Coun. Jeff Davison, called for changes and updates to Calgary's snow and ice control policies after residential roads were slow to be cleaned up.

They cited thousands of complaints about road and sidewalk conditions since the storm, but Mayor Naheed Nenshi said the city deliberately chose not to call a snow route parking ban because so many people were home over the holidays due to pandemic restrictions.

"The snowfall happened … when we were in the midst of a provincially mandated lockdown," Nenshi said.

"We very deliberately chose not to do [a parking ban] — even though we normally would have — because we didn't want to add more stress to people's lives when they're stuck at home."

For her part, Kochney said she hopes the city reviews its policies, but she was heartened by her community's response.

"I hope the city will revisit their snow plan, but I also hope that people realize that in this time of need — and everywhere, even when it's not COVID — [these] are your neighbours that do need help."

With files from Julie Debeljak, Natalie Valleau, and the Calgary Eyeopener.