After more than a century in U.K., Blackfoot relics could soon come home

Alberta's Siksika Nation is lobbying a British museum to return clothing and other items that once belonged to Chief Crowfoot, who signed the historic Treaty 7 between Alberta First Nations and the Crown in 1877.

Beaded shirt, bow and arrow and other items belonging to Chief Crowfoot have been at museum in Exeter 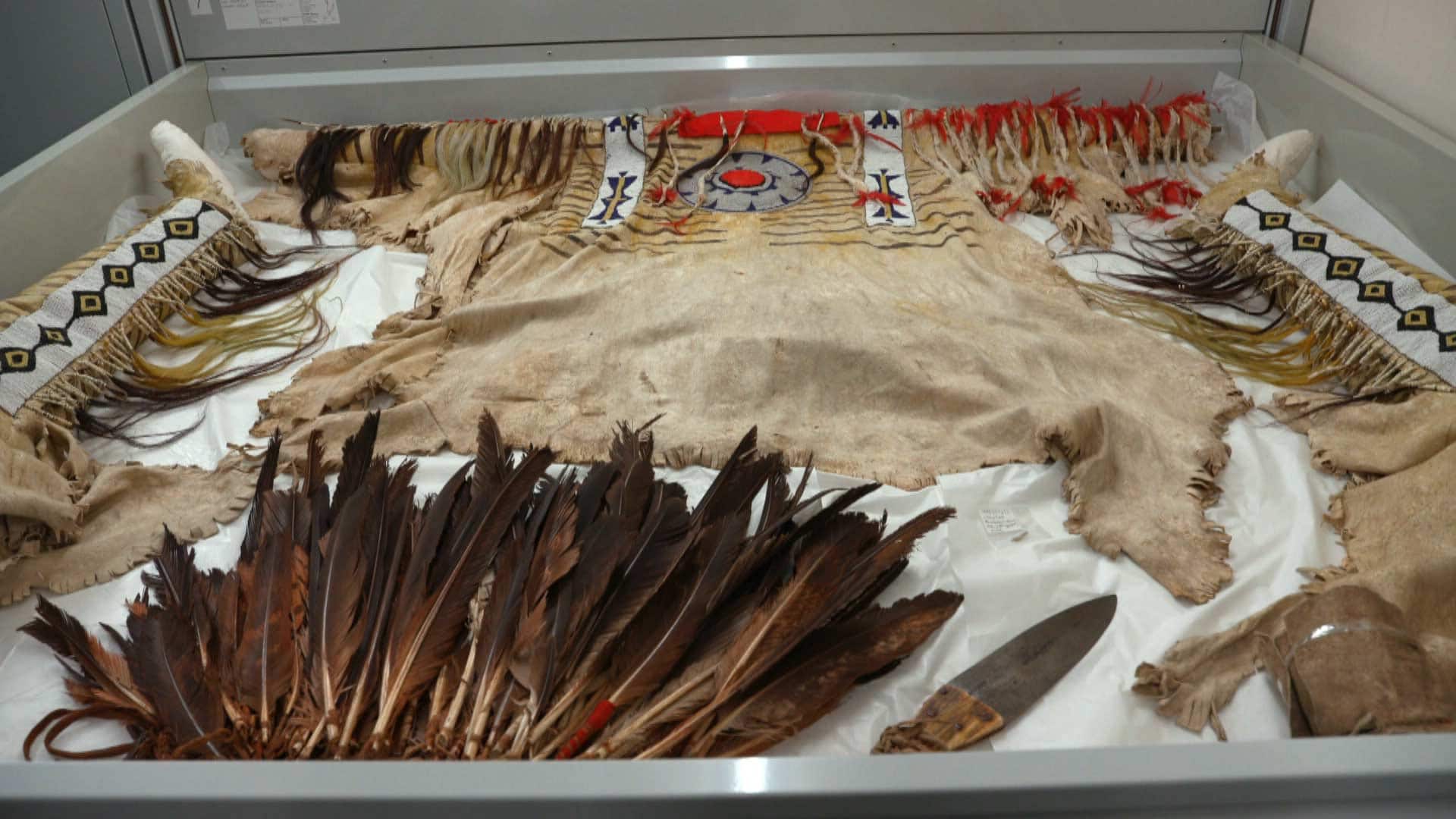 11 months agoVideo
0:41
Alberta's Siksika First Nation is asking a British museum to return clothing, weapons and other items that once belonged to a 19th century chief. 0:41

Alberta's Siksika Nation is pushing to have priceless artifacts returned to them from a museum in the United Kingdom.

The relics, including a beaded shirt and leggings as well as a bow and arrow and other personal possessions, once belonged to a Siksika chief named Crowfoot but have been housed at the Royal Albert Memorial Museum in Exeter, 350 km southwest of London, for nearly 150 years.

Now, the Blackfoot Crossing Historical Park is leading the charge to have the artifacts returned so that they can be displayed on traditional Blackfoot territory (the Siksika​​​​​​​ are one of several clans that are part of the Blackfoot confederacy). The park's Shannon Bear Chief says the items in question are significant because of their connection to the signing of Treaty 7, which laid the foundations of the Crown's relationship with several First Nations in southern Alberta.

Crowfoot signed Treaty 7 on behalf of the Siksika people, and Bear Chief says he is still an important cultural and historic figure to this day, adding that Crowfoot "represents the Siksika nation, and who we are, he is part of our identity."

Authorities in the U.K. could vote to send at least some of the regalia to Blackfoot Crossing as soon as this July.

Located a little over 100 kilometres east of Calgary,  Blackfoot Crossing has long been a gathering place for the Siksika and their Blackfoot allies, so it was a logical place to meet to discuss the document that would eventually become Treaty 7 in 1877 and a natural home for the historical park, according to Bear Chief.

The ceremonial artifacts that the Siksika are now trying to bring home are connected to this spot, the treaty and to Crowfoot, who is buried in the area, according to Bear Chief.

"We believe he was wearing them when they signed the treaty, which is the significance of it, and having that come home is almost like having like a full circle of his return," she said.

The artifacts were lent to the museum in Exeter shortly after Treaty 7 was signed, by Sir Cecil Denny, a former member of the North West Mounted Police and another signatory of the treaty. How Denny acquired the regalia isn't entirely clear. He may have been given them by Crowfoot or he may have purchased them from the Siksika chief.

However they wound up in Denny's hands, he brought them to the U.K. and lent them to the Royal Albert Memorial Museum, where they stayed until 1904, when Denny's family sold them to the museum for 10 pounds sterling, equivalent to a little more than $2,000 Cdn today.

The path to getting Crowfoot's regalia back home hasn't been entirely clear either, according to Bear Chief, who says Blackfoot Crossing began discussing the repatriation of the artifacts with the museum in Exeter almost a decade ago.

The two groups have stayed in close contact, even visiting each other's facilities over that time. Then in 2015, the Siksika group made the formal request to have the artifacts returned, but the answer from the Royal Albert Memorial Museum was no, at least not yet.

The museum is owned by the City of Exeter, and the local government will have the final say on what to do with the artifacts.

Rachel Sutton is an Exeter city councillor and a member of the committee that controls the museum. She says the council and the museum are theoretically in favour of repatriating Crowfoot's regalia, but they first need to be sure they will be looked after properly.

Sutton says the council is "looking for reassurances that the ownership of the artifacts will remain with the Siksika tribal council," and that the regalia will not be owned by a commercial enterprise.

Sutton says it is critical that Blackfoot Crossing is "properly run and managed and has the right equipment for conserving the items."

Alberta Premier Jason Kenney has weighed in, writing a letter to officials in the U.K., assuring them that those standards have been met. Kenney wrote that the historical park had recently completed "museum-standard" upgrades to the facility.

The premier asked for the transfer of the artifacts to be finalized soon, saying that doing so would be a "great act of reconciliation with Canada's Indigenous people."

On the premier's mailing list is the United Kingdom's former secretary of culture and the MP for Exeter, Ben Bradshaw, who says he believes the artifacts will soon be repatriated.

Bradshaw says he believes the few remaining issues "can be ironed out," giving the story "a happy ending."

He said the museum has a legal obligation to ensure that the artifacts are transferred to a safe place but that there is "a very strong moral case" for doing so, given the "U.K.'s colonial history."

Bradshaw says the U.K. is reviewing how it deals with the repatriation of colonial-era artifacts, and he believes the country can do a better job.

Back in Alberta, Shannon Bear Chief says Blackfoot Crossing has done everything it has been asked to do to upgrade its facility, including applying to become an accredited museum.

Bear Chief says she will likely find out next month if that application has been accepted. Either way, she says, the park is ready to receive the regalia and is "more than equipped to take care of it."