Hip Deranger, a member of the Blackfoot Nation, had been thinking about making his way up to see the traditional medicine wheel located in Calgary's Nose Hill Park for the past couple of weeks. What he saw when he arrived made him feel "hurt." 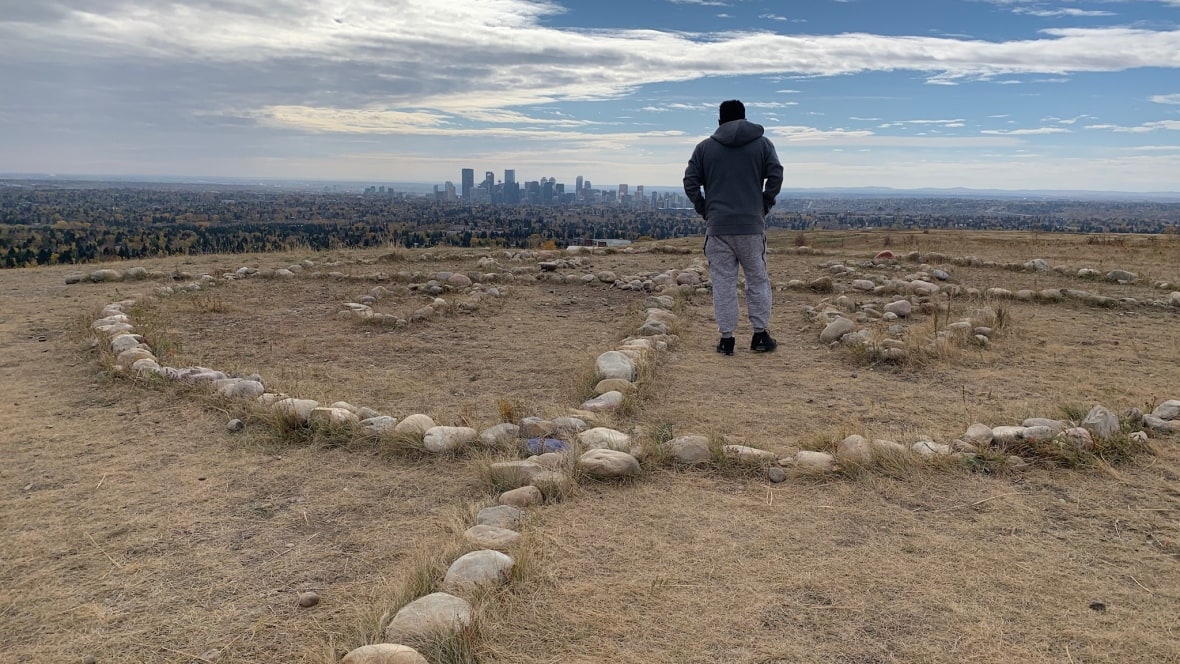 'It shouldn't look like this': Nose Hill medicine wheel damaged

3 months agoVideo
2:17
The city says it will look at installing signs around a sacred spot to the Blackfoot Confederacy that overlooks Calgary on the top of Nose Hill Park after it was vandalized. 2:17

Hip Deranger, a member of the Blackfoot Nation, had been thinking about making his way up to see the traditional medicine wheel located in Calgary's Nose Hill Park for the past couple of weeks.

On Wednesday, he dropped his son off for work and decided to make his way up to the sacred spot, which was built in 2015.

But upon arrival, he discovered the rocks that were constructed in the shape of the Siksikaitsitapi logo — representing the Blood, Siksika and Northern and Southern Peigan tribes — had been vandalized.

The medicine wheel is a sacred spot for reflection and prayer. Those who visit the site are expected to follow specific customs and protocols on how to enter and exit.

Deranger said it was hurtful to see how a vandal had rearranged the stones carefully arranged by the Blackfoot Confederacy, some of which were even removed from the site.

"It's ignorance for people who do that. It's not right," Deranger said. "And so first, is how I feel is hurt. Then, right after that, I feel mad. So when I sat here and prayed, I asked for forgiveness for those people who did that."

Dave Anderson and his young sons know the customs. When they came across an individual on Monday moving the rocks around and sitting in the middle, Anderson knew he had to say something.

"I just said, 'Hey, this isn't yours to be touching. What you're doing is wrong, and you don't have any right to be doing what you're doing to it,'" Anderson recalled. "'It's a culturally significant location that you need to respect, and you've destroyed it.'"

Anderson said he hadn't reported the incident to police, but did post about it on his social media feed.

Ward 4 Coun. Sean Chu said most Calgarians had been respectful of the medicine wheel, but added that he was open to discussing adding more signage at the site.

"Obviously, we need to do something about this," he said.

"My office reached out to the confederacy after I learned of the vandalism, and they replied by saying they will come out Friday to fix it. Some stones had already been put back by fellow Calgarians but the offerings in the centre are gone. As for the sign that will explain the importance and meaning of the circle is ongoing with Calgary Parks. Obviously what will be written on the sign will need to have the input of the confederacy," he added in a direct Twitter message to CBC Calgary.

Kaila Lagran, a spokesperson with the city, said in an email that the city was aware of the situation and was working with the Blackfoot Confederacy to determine the best way to repair the monument.

Meanwhile, Deranger said he hoped the site would be protected moving forward.

"It has to be maintained, it has to be taken care of," he said. "This hill in itself, it's a landmark within our nations … it's not just a hill.

"These are sacred spots, and they have to be respected in that manner. Not how it is like this."