A group looking to replace an iconic, 25-year-old mural in the heart of downtown Calgary with Black Lives Matter imagery is dodging violent threats and racist vitriol, the group co-founder says, and has decided to pull the plug.

A group looking to replace an iconic, 25-year-old mural in the heart of downtown Calgary with Black Lives Matter imagery is dodging violent threats and racist vitriol, the group co-founder says, and has decided to pull the plug.

"It has been incredibly, without mincing words, quite racist and quite violent towards us," Allison Dunne told the Calgary Eyeopener on Wednesday.

Dunne's Pink Flamingo, a group that works with Black and queer people, received $120,000 in funding for a handful of Black Lives Matter murals.

The proposed space for one of those murals, replacing Giving Wings to the Dream — painted by Doug Driediger in 1995 on the former Calgary Urban Project Society (CUPS) building at 128 Seventh Avenue S.E. — seems to have triggered critics.

Giving Wings to the Dream is iconic in the core. It features a pair of hands reaching for the blue sky next to a white bird spreading its wings.

The hands are based off a Polaroid picture the artist's wife took of his own hands. But if you look closely the hands are actually multi-coloured, which was no mistake, Driediger says.

"It was deliberately designed to show a variety of skin hues through the lengths of the arms because then executive director Lorraine Melchior and I both agreed that it was really important to show a diversity in a community aspect to the thing," he explained.

"It wasn't meant to sort of single out an ethnicity." 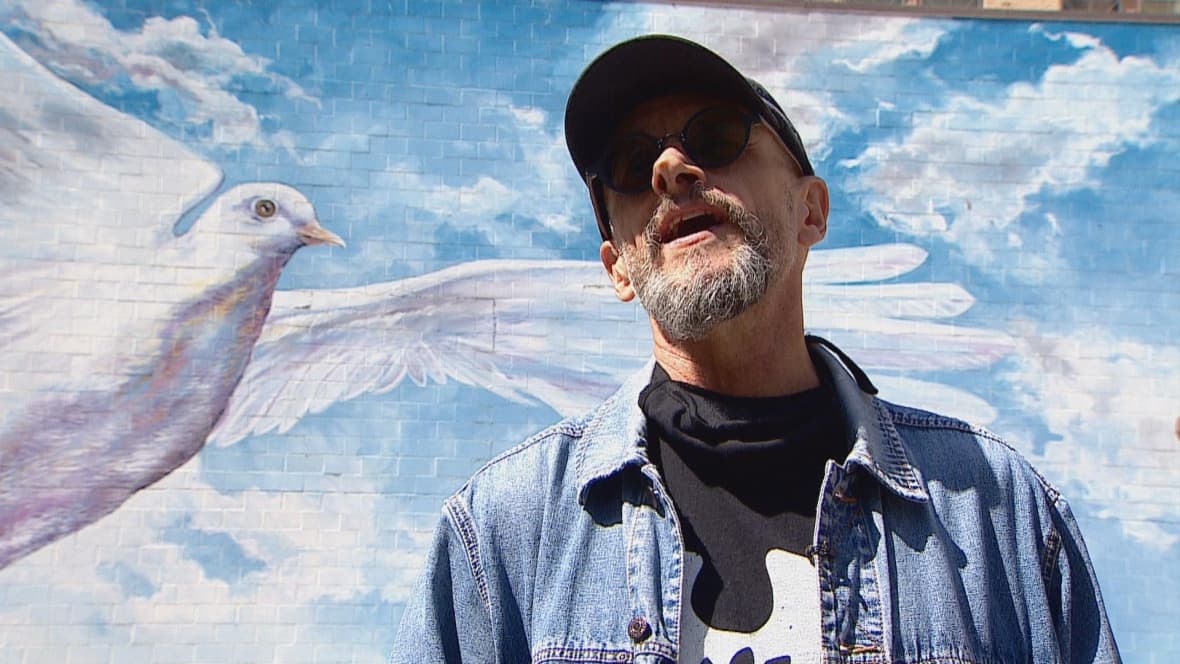 How the Giving Wings to the Dream mural was created

2 months ago
5:18
A beloved mural downtown is staying put for now after a group that proposed a new project faced threats and racism. The artist behind it takes us back to 1995 to find out how it became so iconic in Calgary. 5:18

Driediger is torn on the current controversy and fears an important principle is being lost.

"This controversy isn't about Black Lives Matter or about me. It's about this location. It's about a mural that has been around for 25 years that some say has outlived its lifespan, others have said it's an iconic part of Calgary's cultural heritage," Driediger said.

"I am hearing suddenly people have strong feelings about that mural in that location."

He says many people have reached out to him over the years to say how much it means to them.

"I remember several conversations with people who are living on the streets engaging with me at the time being very powerfully moved by what I was doing, and very thankful for it. I think I still actually have a coin, a seven-sided British coin, that some guy, when he came by below the scaffold and saw me painting, said, 'Love it! Here's my lucky coin.' And he flips this thing up to me 20 feet high. Which I risked life and limb to catch. It's still in a treasured place sitting at home," said Driediger.

The goal with the CUPS mural was to make it dramatic, but also last the test of time.

"I know CUPS works a lot with Indigenous populations, with all kinds of different nationalities, that are disadvantaged and struggling to live in the downtown," he said.

He says there are lots of moving parts, but in the end it's about location.

"I am humbled by the public support but it disturbs me, concerns me that something that is beloved would be removed so something else that is hopefully going to be beloved can be put up. That has been my concern from the outset. I think the location is proving to be a problem."

Dunne says her team is open to productive suggestions but a lot of feedback has simply been, "Don't do it."

Of the 20 initial locations Pink Flamingo had chosen, there was also pushback from some property owners.

"Some buildings did not want the subject matter on their building, even though we don't have the art chosen yet," Dunne said.

"We still have our proposals open right now."

Dunne says her team initially believed Driediger was not opposed to what was planned for the old CUPS building.

"We moved forward with this wall after reaching out to the original artist and would not have gone ahead if we did not understand our correspondence as supportive, or at worst, neutral," Dunne said in a statement later Wednesday.

"We announced this mural weeks ago without backlash, sending more than 145 press releases and doing numerous interviews. The last two days, the narrative has changed, and it is no longer safe to carry out the Black Lives Matter murals this year."

Dunne says the project will be reassessed next summer.

After learning the replacement project was on hold, Driediger said it's a mixed blessing.

"My vanity, my ego, is thrilled that my work will survive another day," he said, adding the racism and threats are horrible.

"I hope that despite all this mess they are able to find ways to really share that in powerful and meaningful and engaging ways."

A city councillor shared his support for leaving the existing mural alone.

"I do not think that something valid and vital, like the symbolism behind the Giving Wings piece, should be the subject of revisionism — especially as our community moves forward together," Coun. Jeff Davison tweeted with a link to a longer post, making no reference to Black Lives Matter or the underlying racial issues.

Some of Driediger's work, like a mural of Guy Weadick on the Stampede grounds, is being removed but is being captured by a photographer for future reproductions.