Bishop Fred Henry, who often sparred with politicians over issues including gay marriage, abortion and HPV vaccination in schools, has resigned after 19 years as leader of the Catholic Church in Calgary. 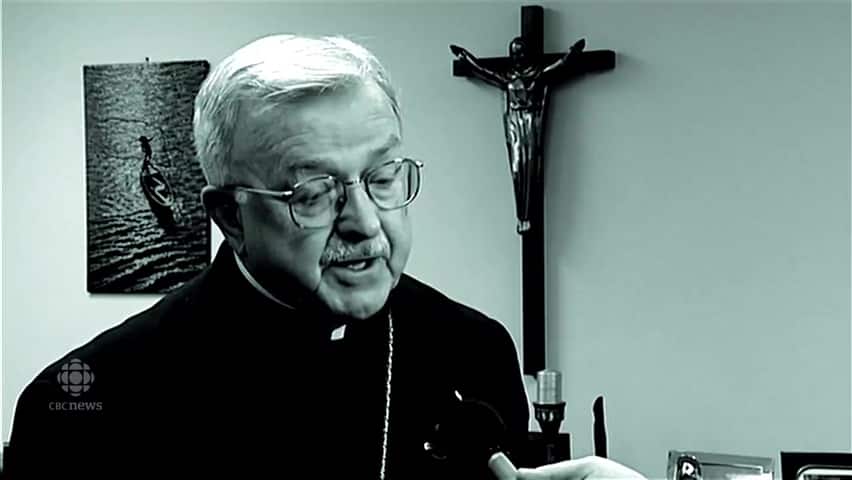 Roman Catholic Bishop Fred Henry has resigned from his position with the Diocese of Calgary, citing medical reasons.

The outspoken and often controversial bishop spent 19 years as the city's leading Catholic authority. He often sparred with politicians over issues including gay marriage, abortion and HPV vaccination in schools,

In his resignation letter to Pope Francis that was posted online, Henry said the "principal reason" for his decision was his ongoing struggle with an inflammatory disease that causes vertebrae to fuse together, creating spinal stiffness.

"I can no longer turn my head sideways but must turn the whole upper body to look left or right," the letter said.

"In addition, I can't really look up but have a permanent stoop and my feet are much more familiar to me than the sky."

'He was a very good bishop'

Catholics in Calgary were caught off guard by Henry's resignation and many who spoke with CBC News said they would miss him as a spiritual leader.

"He was a very good bishop," said Thomas Joseph, who noted the support his church received from Henry when it was fundraising for renovations.

"He did a lot for the community, there's no doubt about it."

Victoria Kamel described Henry as a "holy man" who was popular with parishioners.

"But hopefully, he's happy, because he's done a lot for us and we'll remember him, always, in our prayers."

Henry often made headlines over the years with his political comments on a various topics.

In 2004, he famously accused former Liberal prime minister Paul Martin of being a bad Catholic over Martin's support of same-sex marriage and abortion.

In 2014, Henry called Justin Trudeau "Tweedledum-dumb" after the Liberal leader announced he would expect all caucus members to vote pro-choice on any abortion-related bills in the House of Commons.

Henry also spoke out on less high-profile issues, including the morality of the Body Worlds exhibit when it came to Calgary, a local AIDS fundraiser that supported an organization that promotes the use of condoms and the vaccination of students against human papillomavirus in schools.

The Calgary bishop backed Pope Francis's papal directive on climate change in 2015, and said there is a moral imperative to address the challenge.

The Canadian Conference of Catholic Bishops announced Henry's departure Wednesday. It said the Pope had accepted his resignation and appointed William Terrence McGrattan to the position.

McGrattan was previously Bishop of the Diocese of Peterborough, Ont.

Henry was appointed Bishop of the Diocese of Calgary in 1998.

He declined an interview Wednesday.

In his resignation letter, Henry said "someone younger with more energy, stamina and pastoral vision" should take over his role.

"The needs of this ever-expanding diocese are enormous," Henry wrote. "I have given it my best and I am past my 'best due date' — it is time to retire."