Beltliner hopes anniversary promotion will be a smashing success

It was one year ago that a driver lost control and smashed through a glass wall at the 12th Avenue S.W. diner, prompting a $350 giveaway.

1 year after a vehicle crashed into the diner, they're offering $350 for the best story about a bad driver 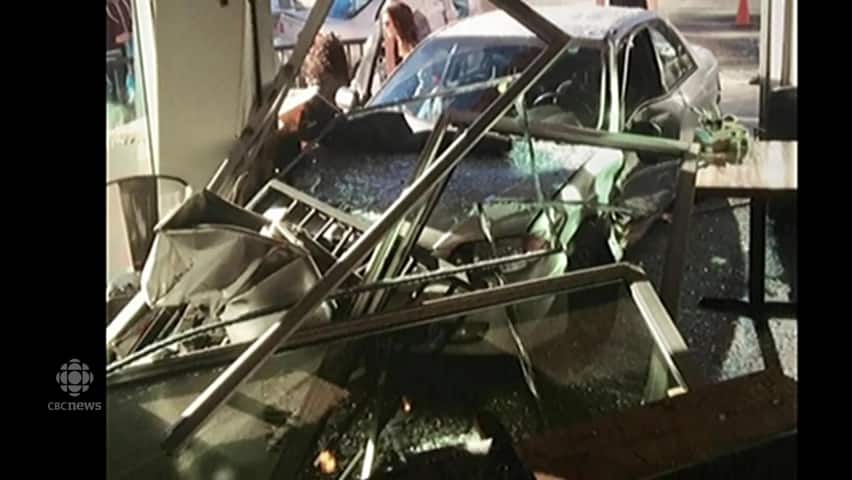 4 years ago
0:36
The Beltliner is commemorating one year since a vehicle smashed through a glass wall by giving away $350 in driving lessons. 0:36

Purveyors of Calgary's Beltliner diner are hoping their latest promotion will be a smashing success.

It was one year ago that a driver lost control and smashed through a glass wall at the 12th Avenue S.W. diner.

No one was hurt, thanks in part to the fact they had just closed for the day.

"It was right in the middle of the restaurant. It was pretty nuts. We all just kind of stood here. We were shocked," bar manager Stephanie Gilker told CBC News.

Despite the damage, Gilker said staff took the mishap in stride.

"We just had like a crazy amount of support … the window that was boarded up, everyone was signing it and drawing pictures and little jokes," she said.

A jar of shattered glass now sits in the eatery as a reminder, along with a plaque on the wall.

Because no one was seriously injured, staff decided to have some fun and came up with an anniversary contest, with the grand prize being $350 in driving lessons.

"So whether that's motorcycle lessons or just even your learner's licence, whatever you want," said Gilker.

To enter, nominate a bad driver by posting a story to the Beltliner's Facebook page.

Responses have already starting rolling in.

"Mostly just photos of park-jobs and that kind of thing, nothing too crazy yet," said Gilker. "But we just launched it yesterday … the more ridiculous the better is kind of the Beltliner vibe."

For added security, the restaurant has installed a concrete planter outside.

On Facebook they joke, "now if you'd like to park your car inside the restaurant, you'll really have to mean it."

With files from Kate Adach